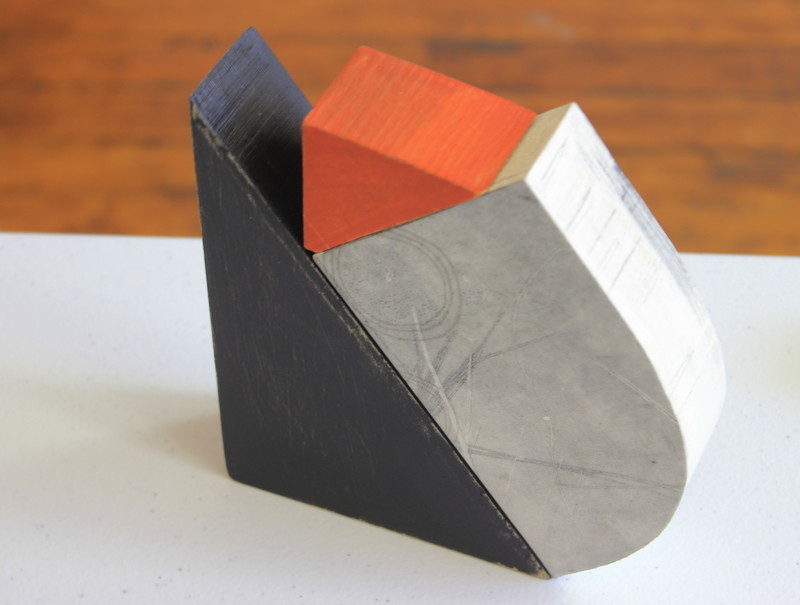 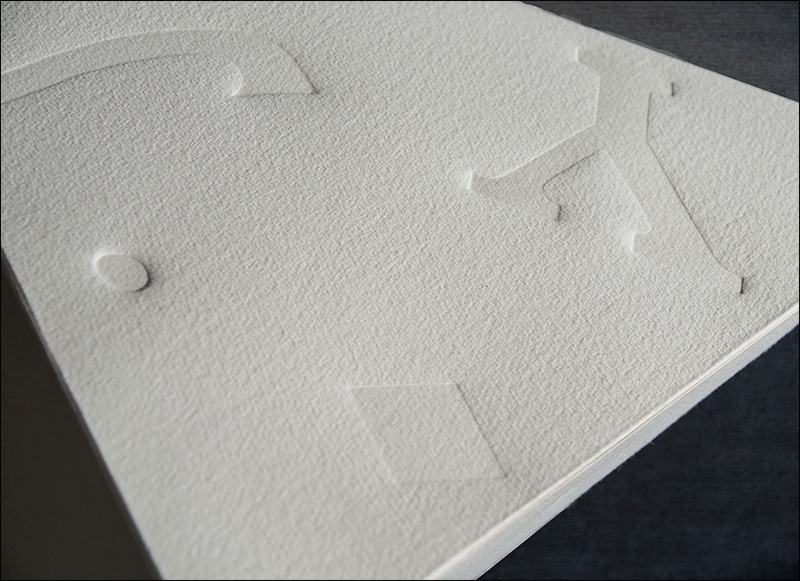 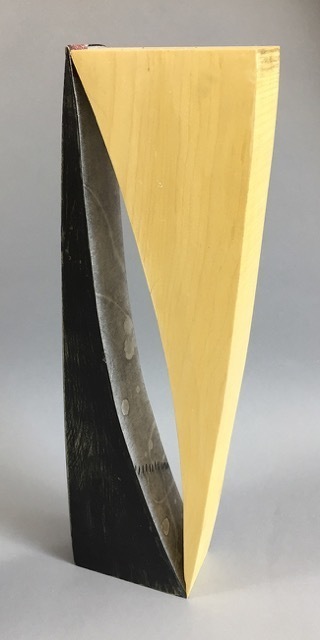 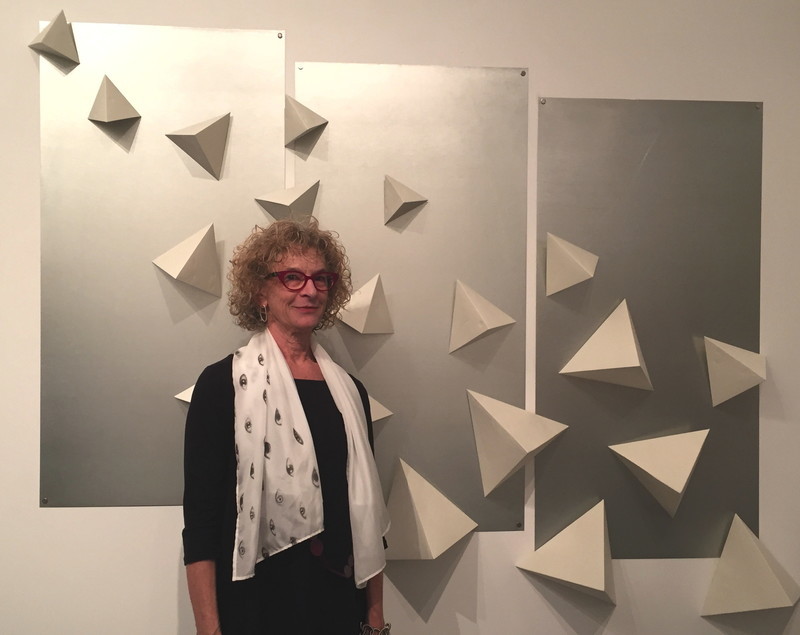 Last year, Beth Fein—then a resident artist at Women’s Studio Workshop, in New York—created, during that particularly heated election season, “When Words Fail Me,” a mixed-media work composed of pyramids printed with typographical fragments that are mounted magnetically to a galvanized steel sheet; the pyramids suggest word fragments, but their message indecipherable and, since the pieces can be moved, random, indicative of the artist’s desire “not to make more words.” In a recent interview, Fein criticized the plethora of fake news and alternative facts in our current national discourse: “Words aren’t working.” At such times, art, including abstraction, can provide an alternative commentary. The artist’s work both as a dancer and creator of dances and as a multimedia artist working in prints, sculptures and installations investigates how movement and flow combine in art and life: in the real time and real space of dance; and in artworks dealing with impermanence and metamorphosis both thematically and, in the case of open-ended works with multiple configurations, literally. Fein embraces experimentation and chance: growing up in the New York, she absorbed the expansive ideas of 1960s avant-gardism: “I have this John Cage influence about chance and choice. It is a way of looking at our lives—responding to chance and making choices. It is a balancing act.”

Fein balances impulses that are inherently in conflict: a conceptual, abstract approach to subject matter and a curiosity about the possibilities of materials. Included in When Words Fail are sculptural installations and mixed-media sculptures from her Voices Project that ironically both subvert and assert the power of language.

The installation, “Around Again,” is composed of thirty-six circular eight-inch discs of paper, suspended and seemingly floating, mid-air, like water lilies. The discs are printed in color on both sides, from deep red or black lightening gradually to white, so they suggest (using a symbolic, non-naturalistic palette) the daily solar cycle as well as the monthly lunar cycle. In past performances, dancers moved between the discs, gently displacing them and causing them to oscillate gently before returning to a new equilibrium. “Betrayed,” from several years ago, featuring printed cones suggesting teeth or stalagmites, indicts the pursuit of money and power, carried, in the absence of moderating influences, to toxic or even self-destructive levels.

Two printed sculptures combine traditional woodblock and letterpress printing with modular compositional structures, reflecting the distortions of advertising, political slogans, and other forms of official persuasion.  Conjunctio means, in Latin, the marriage of opposites; in alchemical lore, it refers to the ‘marriages’ or conjunctions between cosmic pairs of opposites: the active, masculine, sulfurous principle symbolized by the sun, Sol, and its complement, the passive, feminine, mercurial principle symbolized by the moon, Luna; in psychology, it refers to psychic balance between the self and others, making possible “three dimensional relationships [devoid of ego illusions] in the real world.” Fein’s “Conjunctio (Marriage of Opposites)” is a set of eight-inch-square prints placed upright in a radial configuration on a semicircular wooden rack.  Six abstract images in black on white (woodblock) are placed back to back with their negative images in white on black (photopolymer letterpress). Alternating with these are seven woodblock prints of the words chance, change, choice, yang and yin; square cutout windows afford views of the abstract images, which suggest hieroglyphic symbols or pictorial road signage.  The pieces can be rotated into different orientations, and the sequence, too, can be altered, making this work a kind of philosophical game board.  Fein’s pendant wall piece, “Conjunctio II (Marriage of Opposites),” arranges sixteen eight-inch square woodblock prints, eight in black on white, eight in white on black, within a 4x4 grid that suggests, again, a game board, a tray of movable type, or a manuscript; the sequence of verbal units, or morphemes, can be altered, creating different implied ‘messages,’ Fein’s comment on the slippery meanings of contemporary Newspeak. (In 2016, Fein sent prints from a similar series to pairs of opposite personalities: to Michelle Obama and Roger Ailes, of Fox News; and to Pope Francis and Donald Trump.)

The large wooden wall relief accompanying these abstract images, “Speak Truth to Power,” echoes the words of activist Kerry Kennedy, addressing the Center for Justice and Accountability on various civil-rights abuses; and, further back in history, the mandate of eighteenth-century Quakers. Fein creates a kind of international monument or manuscript, laser-cutting the dictum, translated into twenty-four languages, into a stele-like panel honoring “those who have had the courage to speak out,” with the letters emerging from the matrix and fallen and scattered, below.

Words can fail, if we abuse rational discourse; but, imbued with meaning and urgency, they can also succeed. The same holds for images. In 1861, as the Civil War began, the landscapist Frederic E. Church painted “Our Banner in the Sky,” a small oil at San Francisco’s de Young Museum depicting a spectral Stars and Stripes waving from a bare tree, stripped of its foliage by shot and shell. The stripes merge with the red clouds of sunset; the stars dissolve into the deepening night sky.  Fein’s new version of the American flag, “Distressed,” is on white silk, with the edges unraveling, the stars replaced by printed eyes, and the red and blue leached from the flag, and fallen to the ground; the flag’s familiar pattern are printed upside-down, denoting (United States Flag Code, Title 4, Chapter 1) “dire distress ... [and] extreme danger to life or property.”—DeWitt Cheng 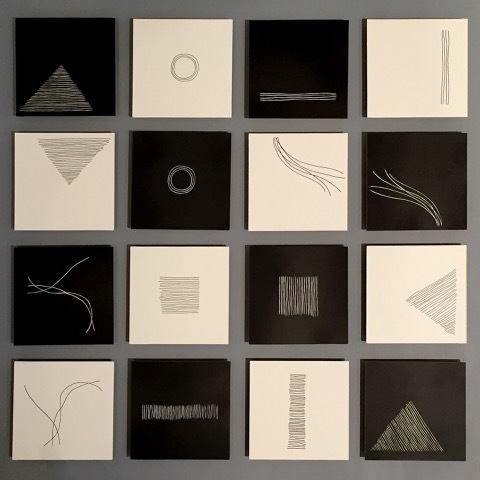