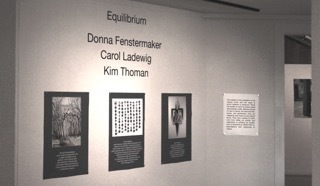 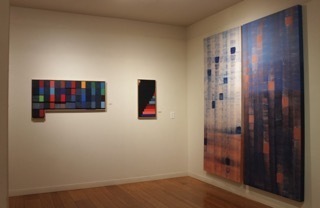 EQUILIBRIUM: Donna Fenstermaker, Carol Ladewig and Kim ThomanOlive Hyde Gallery, 123 Washington Blvd., Fremont CAUntil recently, technology seemed to have enabled mankind to triumph over physical limitations, in effect abolishing time and space. Culture finally vanquished nature; we replaced reality — with the internet, video games and cell phones. While we who live in advanced countries can still appreciate human ingenuity, and the longer life spans and higher standards of living it has enabled, the fact remains that we are now and always have been a part of nature (which occasionally reminds us of that fact); and we are now clearly in a state of disharmony with the planet. Until the twentieth century, the natural world was seen as divine. In the mostly secular twenty-first century, we have (most of us) been liberated from the threat of eternal damnation, but not the spiritual vacuum fed by capitalist culture gone toxic. We are in need of some new form of sacralization of the world; we need to stop seeing nature as dead matter, only good if converted into money.In her 1991 book, The Re-Enchantment of Art, Suzi Gablik writes: “I suspect we are at the end of something —a hypermasculinized modern culture whose social projects have become increasingly unecological and nonsustainable.” She quotes David Feinstein’s Personal Mythology: “we need new myths; we need them urgently and desperately.... Times are changing so fast that we cannot afford to stay set in our ways. We need to become exquisitely skilled engineers of change in our mythologies.” She argues that artists and art have a role, even a duty, in changing society. Gablik: “The world has about forty years, according to ... the Worldwatch Institute, an independent Washington-based, environmental research group, to achieve an environmentally sustainable economy or descend into a long economic and physical decline.” Twenty-seven years later, much of the world has heeded the message, even if America is stuck in its blind faith in the invisible, omniscient hand of The Market.Equilibrium is a group show of three midcareer Bay Area painters—Donna Fenstermaker, Carol Ladewig and Kim Thoman—who explore a range of approaches and styles but share an interest in art’s traditional double nature: as a vehicle for both private aesthetic inquiry, and public enjoyment, edification and persuasion. Installed in separate side galleries, except for one omnibus triple-threat front gallery, the works by these established midcareer Bay Area artists are beautiful objects that argue implicitly for more nature-consciousness and a wider perspective beyond the quarterly dividend. After a generation of art that focused on media culture—is ‘selfie art’ a fair description?—it’s a message that is timely and urgent. 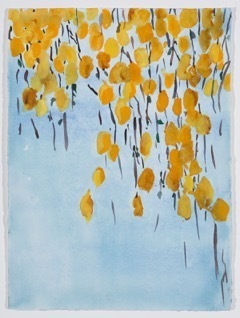 DONNA FENSTERMAKER
The paintings of Donna Fenstermaker begin with close observation of the natural world, but depict the essences of that experience, the mood or atmosphere, rather than the specifics that a photograph would capture readily. These subjective interpretations that depict moments of heightened perception belong philosophically to the modernist tradition of conveying the experience of the observer rather than replicating reality. Fenstermaker—whose semi-anglicized name means window-maker, if my German is reliable—creates views of the northern California landscape that look inward as well as outward. She writes: “My images slide between abstraction and realism. I ... struggle to find and remember what first struck me when I wanted to paint the painting.”That dialogic struggle between observed fact and memory, along with the changes that inevitably occur during the creative process—due to the constraints of the medium, as well as happy accident—energizes the four oils on canvas and the dozen watercolors on paper shown here. Fenstermaker’s love of pattern and color comes across most clearly in her close-up views of foliage: the tall-format oils, Benicia Palms and Berkeley Bamboo; the single-page watercolors of floral mists: the red-orange Gingko, the deep salmon of Liquid Amber and Gingko, and the sprays of harmonized red, yellow and dark green of Rockridge BART. Sometimes the artist works in series, as with the three Birch (or Birches From Window) watercolors, in a Chinese-scroll vertical format, with the autumnal yellow leaves, seemingly threaded on pendant linear branches like beads or pearls on a necklace, set against a blue sky. Sometimes she works in a diptych format, with the two halves coalescing into one image, as in the watercolor Sleeping Trees, with its bare-branched forest, a pattern of dark cracks set against a soft, misty background of foliage and clouds; Davis Rainy Day, with its central sidewalk, receding into distance while reflecting the otherwise unseen moody sky, surrounded by yellow streetlamps atop spindly poles, like mechanical daffodils; and Sparkle, a diptych of deep blue bisected by a jagged yellow zip of a lightning strike crossed with an oscilloscope or seismograph recording, inspired by a car-window glimpse of sunlight striking San Pablo Bay: nature abstracted into near-mysticism. 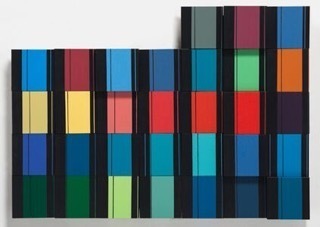 CAROL LADEWIG
If Fenstermaker’s work is a painterly synthesis of observation and memory, Ladewig’s geometric abstractions follow a decidedly more abstract, conceptual route to representing the natural world and the passage of time, interpreting the calendar and astronomy through matrices of colored blocks. In graduate school, the artist was prompted by a painting teacher to create one painting a day. Making work systematically and regularly suited Ladewig, so that when she became interested, seven years ago, in the counter-intuitive (even quixotic) project of capturing change in the static medium of paint, she turned to a format of a diary/calendar based on squares and grids, with the painting evolving as an accretion of daily samples. Ladewig: “Rectangles and squares are the only shapes that seem truly abstract to me and that we live in and are surrounded by.... The grid is a metaphor for the frames of reference that we utilize to organize and understand perceptions. The frame of reference is neutral and yet it clearly shapes what is received into it. The grid sets up relationships between related and disparate elements.”Ladewig’s interest in depicting “psychic space,” another difficult intangible, also fed into her breakthrough Year paintings of 2011 and 2012, two of which are shown here: 2012 Lunar Phases: Weeks 46-47 and 2012 Lunar Phases: Weeks 31, 32 & 33. The vertical-format acrylic paintings, brightly colored horizontal bars arrayed atop a black background, resemble, superficially, the hard-edged color abstractions of Frank Stella or Kenneth Noland, but they encode the hours of darkness (black) and moonlight (colors, chosen arbitrarily, subjectively, based on “the day’s unique experiences, activities and moods”) during the November and August study intervals. The later Year in Color paintings for August and September 2013 use the monthly calendar page format, with four or five registers of seven rectangular blocks, with August’s varicolored daily samples beginning on Friday and ending on Saturday, and September’s beginning on Sunday, ending on Monday. The painted blocks vary slightly in elevation, so that they appear syncopated, like player-piano keys, frozen by the camera: the music of time, encompassing the lunar and the terrestrial, is recorded in a kind of score. A larger piece, the striking Winter 2016: Year in Color, composed of some 90 separate squares, circles and triangles, all individually painted, and linked by a meandering (‘boustrephedonic’ in art-historianese) line, suggests a gameboard or flow chart of unknown purpose. Time Lapse, a two-panel painting in oil and resin on canvas, suggests a dialogue of opposites: white and blue for day and night,r espectively, with a matrix of squares on each, darkened or illuminated, like lighting arrays or keyboards, or videos, pixelated into abstraction. 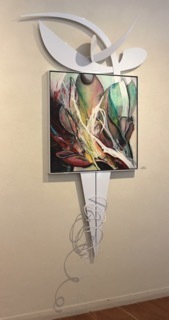 KIM THOMAN
From Ladewig’s subjective astronomy we move to Thoman’s expressionist botanical forms, visual metaphors for growth, change and decay. The grand cycles of cultures and civilizations were the theme of Romantics like J.M.W. Turner and Thomas Cole, who depicted the ruined glories of the classical world as allegories and warnings, but where those artists saw human frailty, moral failure, and “the strong force of fate,” Thoman sees instead, in nature, the irresistible biological imperative. Her powerful gestural drawing and her rejection of illusionism invoke and evoke the strong forces of nature. Thoman’s philosophical conviction that “duality exists in everything” informs and energizes her pastel and mixed-media digital drawings and sculptural works. The art critic Peter Frank wrote: “...every phenomenon is a balance of opposites, a dialectical resolution of contradictions that reveals hidden harmonies between supposedly antagonistic forces.”Shown here are four recent mixed-media pieces from Thoman’s They series of 2017, numbers 1, 2, 5 and 6, which feature square painted panels that serve as the torsos of Bauhaus-style geometrized human figures fabricated in painted steel. (The anthropomorphism here continues the human icon concept from Thoman’s earlier Gray Matters series, patterned on Crucifixion triptychs.) The limbs are sharply pointed triangles; the heads are coils of wire, or spoon-shaped metal projections. The sculptural and the painted elements are siimilar, suggesting vitality that is barely contained, or overflowing its banks. Each of these four androgynous personnages (to employ the Surrealist term for such ambiguous humanoid beings) stands alone, wall-mounted; yet all are related, sharing the same visual DNA. Also shown are three mixed-media Shortstop Tangle digital drawings, preparatory sketches for the They figures, which show the artist trying out different configurations and palettes. 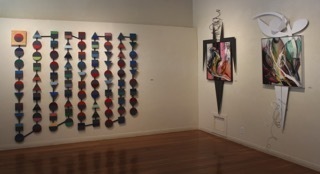 Our current political situation leads some of us in our exhaustion and dismay to see art as unworthy of our attention. While we need to stay informed and combative, we also need the aesthetic freedom and even healing that serious art can provide. Equilibrium to me signifies a balanced, long-term perspective: viability, in effect, in a destabilized environment. Art is an equilibrating as well as a liberating influence; it is also potentially a Brechtian hammer for shaping reality and a Picassean weapon with which to attack it.
views