« Back to blog
An edited version was published in Richmond Review, August, 2019 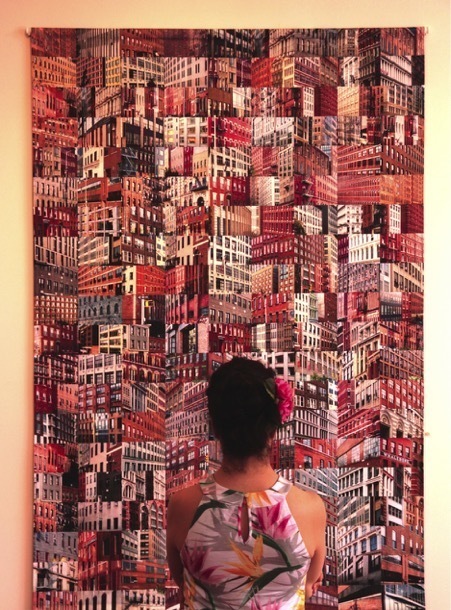 If traditional matted and framed photographs that depict one instant in time from one viewpoint—“the decisive moment,” in the phrase erroneously attributed to the French photographer Henri Cartier-Bresson—seem somehow old hat in the everything-right-now digital era, the current show at Avenue 12 Gallery may be what you’re looking for.

Urban Rhythms features a variety of photographic collages or mosaics by Simo Neri, shot in Paris, Rome and New York, before her recent return to San Francisco, and printed on cotton canvas and silk. Presenting multiple views of places and events that capture the complexity and simultaneity of contemporary life, they may remind you of the multiple views in Picasso’s cubism and the ironic photo arrays in Warhol’s Pop, a century ago and fifty years ago, respectively. The show opened June 26 and reopens, after a hiatus, on July 31, continuing until August 17.

If you are unfamiliar with Avenue 12 Gallery, it’s a gem of a space located at the corner of 12th Avenue and Lake Street in the Richmond, across the street from Mountain Lake Park. Formerly a convenience store, the light-filled storefront was converted to a showroom for Japanese furniture and artifacts under the name TableAsia in 2005. Vince Meyer, who with his wife Rachel Murray Meyer owns the gallery, grew up in the Richmond District, and learned metal work from his father, the proprietor of Metal Mending, on Clement Street, between 12th and Funston, across from the Christian Science Reading Room. VInce took over the business from his retired father, and operated it until 1988. In the mid-1980s, a client brought him a tansu, an antique Japanese storage chest of exquisite craftsmanship, requesting that he fashion a steel base suitable for displaying the piece in a western home: raising it about eight inches to table height; protecting it from kicks and scuffs; and bestowing on it the formal presentation worthy of a museum piece. 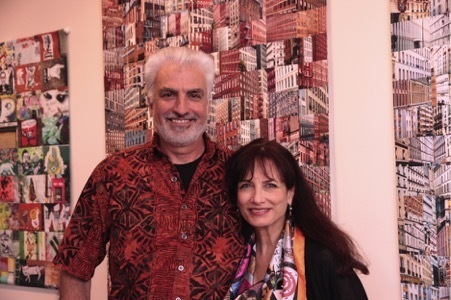 Vince: “I fell in love with the whole Japanese aesthetic, the art, the culture; I started reading about Buddhism and Zen, and watching Kurosawa movies—the whole deal.” Devising a strong but minimalist powder-coated black steel structure, he was discovered by other antiques clients as well as a few artists, and Table Asia continues today with in the gallery, discreetly subordinated to the contemporary art, and online (tableasia.com), with custom contemporary furniture fashioned from beautifully carved and gilded windows, doors and ranma, and wooden transom screens, as well as hanging painted silk scrolls and framed katagami, the intricately cut paper stencils used in block-printing fabric for kimonos.

Several years ago, the Meyers decided to hang the artwork of several painter friends and local artists in the gallery. Rachel: “We thought it was just going to be one show at that point. But it was exciting to see new work on the walls and the artists were so happy to see their work on the walls.” VInce: “We started meeting new people, and it expanded. We always thought of it as an expansion rather than a change.” Rachel has been an art collector since college, buying a painting at the Smith College Art Gallery in installments from her waitressing job (“I have to have this. I want to live with this.”). A professional artist and photographer herself (as well as an industrial engineer), she also had prior experience selling photographs, both hers and those of William Giles and Ruth Bernhard; she was also involved in an art auction benefiting the Dalai Lama. “Sharing the space” with artists and the art community is a priority with the Meyers, who are active participants in the Bay Area art scene as well as members of the San Francisco Art Dealers Association. 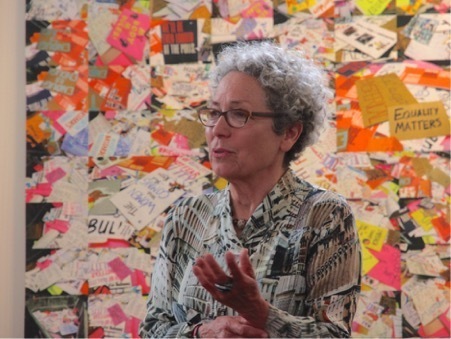 In her July 20 talk at the gallery, SImo Neri displayed the passion and intellectual curiosity that mark all of this gallery’s exhibitions. She distinguished between theoretical or project-based artists, who work from a premise, and artists who “go out and hunt and capture visual opportunities ... opportunistic photographers,” with whom she feels a closer affinity. She also identifies as a “serial photographer: “One image does not tell the whole story. Combine enough single images, and patterns and rhythms emerge.” Indeed, for Neri, rhythm is more than a compositional device: it’s her view of the structure of life on earth, visible in the of her patchwork quilt of her earthen-hued photos, “Mura Romane II (Roman Walls); the herringbone pattern of alternating diagonal architectural vistas in “Paris Perspective” and “NYC Perspective”; the architectural treasures of Korea, copied from old books and colorized in Prussian blue in “Door and Windows” and “Roofs”; and collages of Paris garbage (“Trash’), Brooklyn graffiti (“Talking Walls II”) and protest-march signs (”Signs of the Times”). Each Urban Rhythm photocollage is composed of Cartier-Bresson images à la sauvette, to use the French term, taken on the sly rather than planned and pre-visualized: each assemblage of grab shots, to use contemporary American photo parlance, is elevated to the level of art. 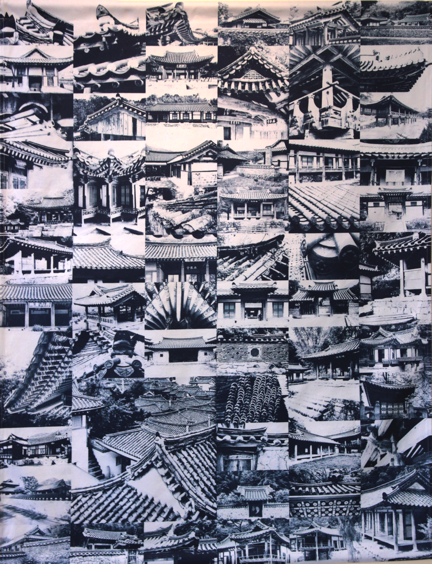