"I’ve never grown blasé about the fact that a painting can actually summon people to the present moment; it seems like a form of magic”, Eva Bovenzi writes. She titles this exhibition “Present Perfect” in a nod to the capacity of art to bring a viewer to the Now. Bovenzi’s visual vocabulary is poetic and entirely her own. Her paintings are fresh and original, yet also read as timeless iconic forms. Having studied sources as varied as Spanish manuscript painting, Romanesque and Byzantine frescoes, Tantric images and Native American ceremonial objects, Bovenzi describes herself as “in the tradition of artists who have tried to give visible form to the invisible”. Her work deliberately evades an easy verbal summary, gesturing towards the ineffability of experience. Alluding to the shapes of shields, sentinels and masks, Bovenzi's images are bold, emphasizing physicality—yet their materiality is countered by luminescent veils of color that seem to expand past the structures that contain them. Constructed with matte, fluorescent and metallic colors, the surfaces of the paintings alternately absorb and reflect light, adding a subtle depth and movement to the work. Eva Bovenzi’s art simultaneously suggests solid and void, presence and emptiness, stillness and movement. Mysteriously emblematic, the work’s sheer beauty offers the viewer an experience of transcendence, inviting the present to become perfect. — https://www.pastineprojects.com/project-09 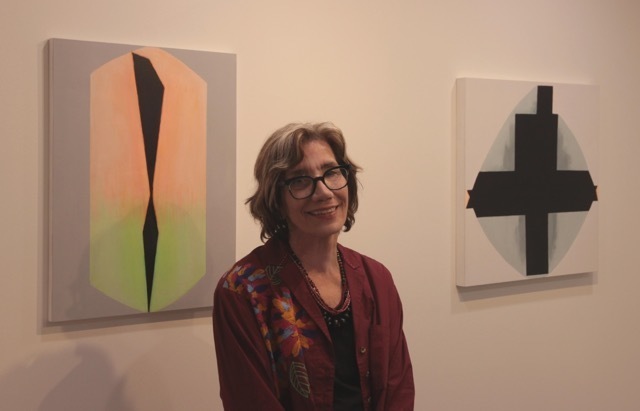 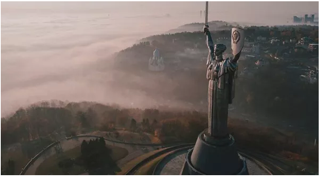 Motherland Kyiv monument (1981), dedicated to the memory of those who lost their lives in the Second World War. Its base is the Kyiv WWII Museum’s Hall of Glory, inside which one can find the names of over 11,000 soldiers and workers who earned the title of Hero of the Soviet Union or the Hero of Socialist Labor during the war engraved on massive marble slabs. The statue itself is 62 meters tall and is made entirely of stainless steel. For more information: [https://destinations.com.ua/news/big-cities-life/915-the-observation-platform-at-the-motherland-monument-in-kyiv]

For the last five days as this is written, everyone who understands the gravity of the Russian invasion of Ukraine has been riveted to the news. Most Americans — with the exception of the insensate, incensed Trumpist right — are rooting for the Ukraine resistance. Fox News wavers between attempts to blame Biden for the situation and, forgetting its decades of anti-green tirades funded by petrodollars, asks why isn’t the US energy-independent? Rhetorical questions based on false premises and predetermined conclusions are, of course, the demagogue Tucker Carlson’s infuriating stock in trade.

The outcome is far too early to predict. A few days ago, the massive advantage of the Russians in troops, material, and high-tech weaponry seemed to be the decisive factor. Now, after a determined, heroic resistance by Ukraine by its menfolk ages 18 to 60, armed with Molotov cocktails, light arms, and Javelin and Stinger missiles, the Russian blitzkrieg has slowed. (The fiercely independent Cossacks apparently survive in the Ukrainian DNA.) 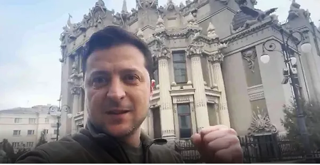 on social media: "I need ammunition. I don't need a ride."

Putin has agreed to negotiate with Ukraine without preconditions while simultaneously brandishing nuclear weapons against Ukrainian allies. He retains a single military ally in his vassal state Belarus; it is there that the negotiating teams have now met (let us not get our hopes up for a quick settlement). Contrasting with this bluster is the quiet, determined courage of Ukraine President Volodymyr Zelenskyy, the onetime comedian and actor (and Jeremy Renner lookalike) who has rebuffed attempts to spirit him to safety: “I need ammunition. I don’t need a ride.” Already he has been compared in Western media to Winston Churchill standing up to Hitler, and the gladiator Spartacus taking on the slave-holding Roman Empire. Is Putin now playing the nuclear madman (as Nixon thought himself clever to do, once upon a time)? Or is he just engaging in KGB/GRU brinksmanship — being "smart,” in Trump’s words, pulling off this daring coup attempt at the low cost of only a few “two-dollar sanctions?”

I had originally intended to write a brief précis of Ukrainian history leading to the present crisis, but, silly me, the complexity of the area’s history defies an easy synopsis. Putin’s claims that Ukraine was never a real nation; that it was founded by a diplomatic error on the part of Lenin after The Great War; and that Ukraine was, is and will always be an indissoluble part of Mother Russia and that the Ukrainians and Russia are “one people” are absurd. Why decimate your own people? All national origin stories tend to be vastly over-simplified myths in any case. Both Russians and Americans suffer from propaganda gone viral — from a 24/7 barrage of “fake news“ (Trump) and “alternate facts” (Kelly Anne Conway) — and fear of facticity. The opposition to critical race theory and the censorship of “disturbing” books are arguments for ignorance and serfdom. 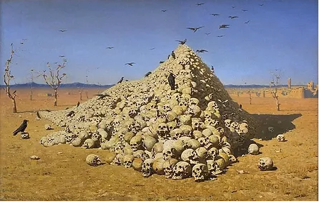 Vasily Vereshchagin, “The Apotheosis of War,” 1871. Courtesy of Tretyakov Gallery, Moscow, dedicated “to all great conquerors, past, present, and to come.” Pyramids of skulls refer to Mongol “shock-and-awe” practices of 1220. — Wikipedia

Ukraine, a vast, Texas-sized steppe bereft of natural barriers but rich in agricultural soil and industrial resources, has been fought over for centuries by various regional powers. Think of Anselm Kiefer’s painted panoramas of mud occasionally mixed with the blood of indigenes and invading armies. Ukraine entered history with the creation of Kievan Rus (more properly in Ukrainian, Kyivian Rus), a Slavic/Baltic/Finnic empire united by a Norse or Slav Prince Rurik (d. 879). His descendants, the Rurikids, ruled the geographically blessed “small city on a hill” sitting on the Dnieper River astride several trade routes, for approximately four centuries, from the late 9th to the mid-13th century. Russia takes its name from Rus, as does Belarus. Vladimir the Great (r. 980-1015) was the Constantine of the Rurik empire, converting it to Christianity — for aesthetic reasons:

…when Vladimir had decided to accept a new faith instead of the traditional idol-worship (paganism) of the Slavs, he sent out some of his most valued advisors and warriors as emissaries to different parts of Europe. They visited the Christians of the Latin Rite, the Jews, and the Muslims before finally arriving in Constantinople. They rejected Islam because, among other things, it prohibited the consumption of alcohol, and Judaism because the god of the Jews had permitted his chosen people to be deprived of their country. They found the ceremonies in the Roman church to be dull. But at Constantinople, they were so astounded by the beauty of the cathedral of Hagia Sophia and the liturgical service held there that they made up their minds there and then about the faith they would like to follow. Upon their arrival home, they convinced Vladimir that the faith of the Byzantine Rite was the best choice of all. (Wikipedia)

Vladimir Putin and Volodymyr Zelenskyy are Vladimir the Great’s current namesakes. Dynastic quarrels (including the 1015 familicide of Syvatopolk the Accursed), the increasing power of clans, and constant warfare weakened the principate, which fragmented into twelve principalities that succumbed to the Mongol (or Tartar) invasions of 1223 and 1237-42, becoming tribute-paying vassals of the Golden Horde. Kyiv was sacked by the Mongols in 1240, ”reduced almost to nothing,” in the words of one witness. It was Mongol rule, however, that created Russia, Ukraine, Belarus, and Moscow, which threw off the “Mongol yoke” centuries later, in 1480:

Moscow's eventual dominance of northern and eastern Rus' was in large part attributable to the Mongols. After the prince of Tver joined a rebellion against the Mongols in 1327, his rival prince Ivan I of Moscow joined the Mongols in crushing Tver and devastating its lands. By doing so he eliminated his rival, allowed the Russian Orthodox Church to move its headquarters to Moscow, and was granted the title of Grand Prince by the Mongols. As such, the Muscovite prince became the chief intermediary between the Mongol overlords and the Rus' lands, which paid further dividends for Moscow's rulers. (Wikipedia)
After that colorful prelude we fast-forward through centuries of domination by Polish, Lithuanian, Austrian and Russian overlords. Ukrainians who resisted serfdom imposed by the Polish-Lithuanian Commonwealth and later the Russian tsar rose in periodic revolts that were eventually suppressed in the late 18th century.
With the rise of nationalism in the early 19th century, Polish, Russian and Ukrainian intellectuals extolled Ukrainian culture, publishing dictionaries and histories, writing new works in Ukrainian, and advocating the teaching of Ukrainian despite official efforts to suppress ukrainopihila. These had begun earlier, with Catherine the Great (ironically, a Rurikid) in about 1768, when she gained control of Ukraine from the Polish-Lithuanian Commonwealth. By that time her youthful fascination with the Enlightenment had yielded to realpolitik. This trend continued under the tsars until the Russian Revolution in 1917. Under the new tsars of Communism,  in the 1930s, Ukraine suffered purges of dissenting intellectuals and the tragic Great Famine, caused by Stalin’s ruthless expropriations of grain, a drought, and a labor force decimated by the Great War and the Russian civil wars. Whether the famine was planned genocide is a matter of contention; its effect, however, was as genocidal as the relocations of Native Americans in this country. 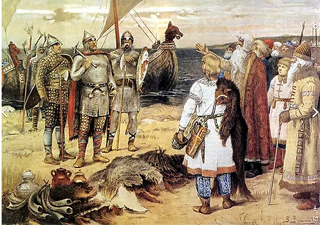 Viktor Vasnetsov, “The Invitation of the Varangians.” Rurik and his

brothers Sineus and Trevor arrive at the lands of the Novgorod Slavs.

The massive protests in Russia against Mr. Putin’s “war of choice,” in President Biden’s words, serious matters to a dictatorship, give us a flicker of hope that Putin’s time may be ending. If Ukraine can stay in the fight, and create another military morass similar to Afghanistan, and the eight (or is it now seven?) oligarchs turn on the Vozhd so as to render him and his imperial fantasies void, then Russia may escape becoming an irrelevant declining power. The future is calling. For the moment, remember that after 9/11, people all over the world claimed to be Americans. Right now, we are all Ukrainians. Glory to Ukraine! 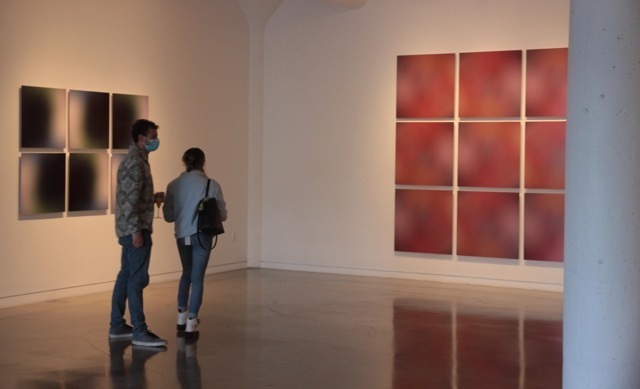 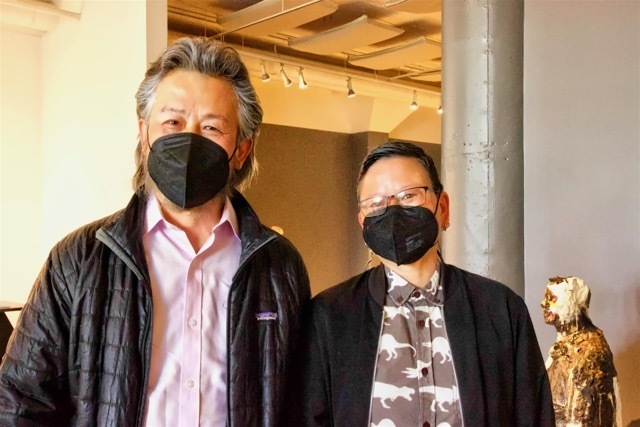 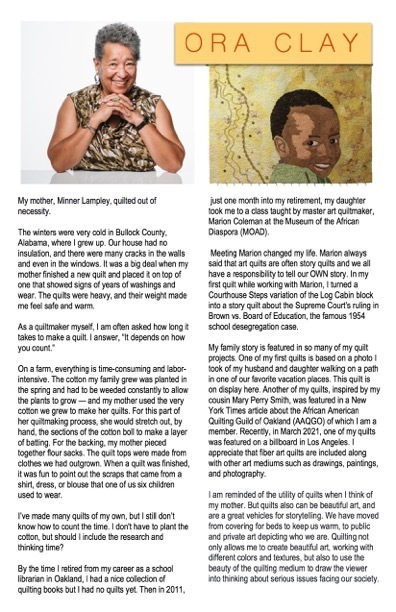