The term Alt-Right, a recent coinage, is shorthand journalese for the belief system of Donald Trump’s supporters, those white working class (WWC) populists whom Hilary Clinton, in an accurate but politically maladroit moment, called a “basket of deplorables.” Alt-right combines various strands of contemporary radical conservative thinking: nationalism,white supremacism, racism, religious bigotry, sexism, and nativism, flavored by a dash of populism. While the desertion of the WWC by both major political parties is now, weeks after election-day apocalypse, generally conceded. It has not yet become clear to Al-t-Righters that their interests will very likely be ignored as before by the new corporate oligarchy serving the ultra-rich: meet the new boss, same as the old boss. Our social safety net and even our social contract are now, in the Age of Trump, ‘negotiable.’

San Francisco is perhaps the most politically and culturally liberal region in the country, its reputation for tolerance and progressive politics probably second to none. (Conservative political strategists play the “San Francisco liberal’ card with some regularity, in fact, mocking Political Correctness as a kind of mind control, not simply human decency transposed to the political realm. Bay Area artists have accordingly been among the most outspoken critics of mainstream, status-quo politics. The Berkeley art historian Peter Selz—who as a young man visited Hitler’s Degenerate Art (Entartete Kunst) show in Munich in 1937— writes, in Art of Engagement: Visual Politics and California and Beyond:

Some critics and artists have argued “if it is political, it is not art,” while others stipulate that ‘if it is art, it is not political.” My contention is that not only can artists comment significantly on politics in their work, but political engagement in specific situations can produce authentic art.

Two years ago, I wrote about a show of contemporary artists fusing political content with an imaginative, even surrealist style:

Artists have often served as cultural critics in the past, even, via satire, as moralists, in a bizarre way, and some continue to do so, even if people no longer look to art for education or moral edification. Paradoxically, artists employing traditional realism—creating windows into alternate or superior realities— most cogently point out the flawed unreal core of consensus reality…. [They] leaven their cultural critique with irony, imagination and humor, and exemplary craftsmanship. Through satire, they help us deal (square ourselves) with things as they are, illustrating what a long, strange trip it’s always been, as their spiritual predecessors Hieronymus Bosch and Pieter Bruegel knew only too well.

Alt-Left: Local Treasures is a Bay Area art response to the Alt-Right. It features work by three painters, Mark Bryan, Michael Kerbow and Ariel Parkinson; two collagists, John Hundt and Vanessa Woods; and a sculptor, Francisco Jimenez, who comment on history, politics and psychology with both deep feeling and a mordant, absurdist humor.  Viewers may laugh; viewers may cry. The present political moment calls for engaging with reality and abandoning  the cargo-cult consumerism that have dominated political discourse for three decades. To oppose and outlast the depredations of the immoderate minority, ‘the “radical rich” (David Frum),  the moderate majority, i.e., we the 99%, will require “radical hope” (Jonathan Lear), unremitting opposition, and eyes-on-the-prize determination. —DeWitt Cheng 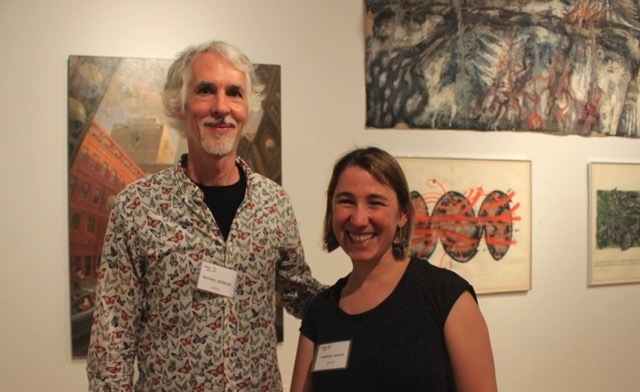