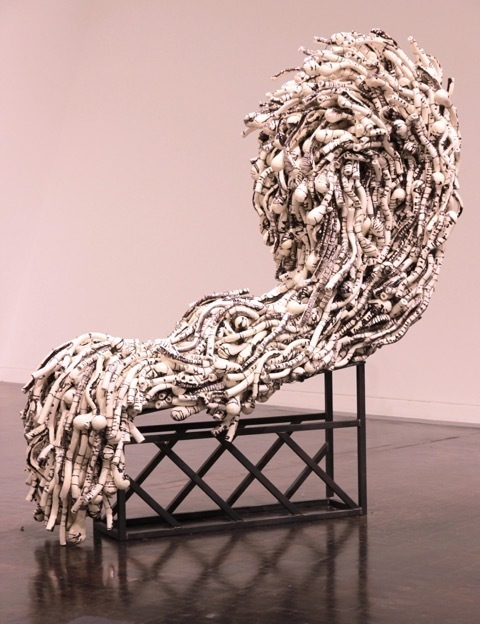 Annabeth Rosen’s extraordinary exhibit of clay sculptures—resembling serving vessels, table settings, and standing figures—is a virtuosic display of craftsmanship, but also of experimentation. Subtitled Fired, Broken, Gathered, Heaped, this retrospective features thousands of ceramic fragments assembled into modestly-sized but visually and emotionally powerful composites. Rosen, the Robert Arneson Professor of Ceramics at UC Davis, shares some of that Funk artist’s outré sense of humor, but she also takes from the ceramic abstract expressionist Peter Voulkos, one of her teachers, a love of clay’s versatility, physicality and malleability. I suspect also that Stephen de Staebler’s use of broken and normally discarded pieces from the kiln nay have influenced her, and can easily imagine her reconstructed potsherd vessels in curatorial dialogue with his tragic, broken archaic figures. Tracing these possible genealogies takes nothing from Rosen’s achievement, however. We overvalue what appears unique and novel in our era of insecure individuality and compensatory braggadocio; we should acknowledge that art transcends generations, and that the best art is voraciously informed, not wilfully ignorant.

The show’s arrangement—clusters of related works separated by long risers festooned small vessel-like sculptures— suggests a festive gathering. The banquet analogy may suggest both Judy Chicago’s powerful The Dinner Party, with its place settings commemorating women short-changed by male-dominated history; and the more playful 1971 sculpture,  “Smorgi-Bob, The Cook,” by Arneson, with its forced-perspective table of serving dishes leading to a vanishing point occupied not by Leonardo’s serene Jesus, but the young artist (his first self-portrait), the master of ceramic gastronomy. 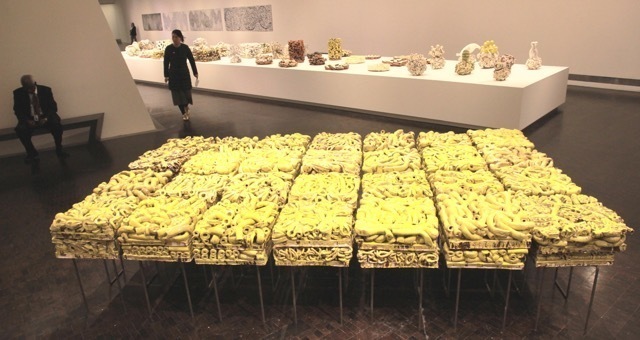 ... the slope-shouldered new sculptures seem to have neither fixed contours nor stable shape; even their scale appears to shift as you look. Some hint at volcanoes, others at featureless heads. Not so much covered with as compounded of hundreds of writhing, snakelike elements, they are variously volcanic, beastly, catastrophic, and unnervingly funny, suggesting ... granite, bone, molten lava, cascading water, and substances less noble: cake frosting, lanky hair ... dirty snow. Many are blackened in their recesses, as if soiled with age.

The exhibition is exciting and exhilarating, with the 120 or so works impeccably displayed. But because of the absence of labeling, it’s also somewhat difficult to absorb and navigate. The pertinent information—titles, dates, etc.—is available in binders that one can carry around, but it’s cumbersome and time-consuming. I understand the argument that labels get in the way of aesthetic engagement, and agree, to some extent, that some viewers judge work only by brand names; but let’s leave it to the viewers to decide if they want to follow the artist’s progress. Also, Rosen’s witty titles, some of which are probably invented words, are not to be missed. That quibble aside, here’s a brief verbal tour of the show, with the five bodies of work listed in chronological order. 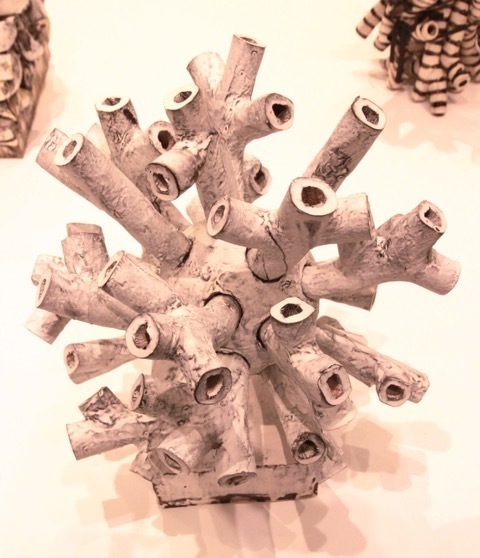 Section 1 includes works from the 1990s upon her arrival in California from New York, with substructures resembling plates and tiles supporting dense encrustations of animal and plant life, but the geometry nearly disappears beneath the imagery, like Hindu temples swarming with statuary. Sample (1999), a grid of squirming, tentacular yellow froms reminiscent of noodles, kelp bulbs and split avocados, suggests a gigantic lasagna, albeit one the size of a bed or car; it is easy to spot at the rear of the gallery. 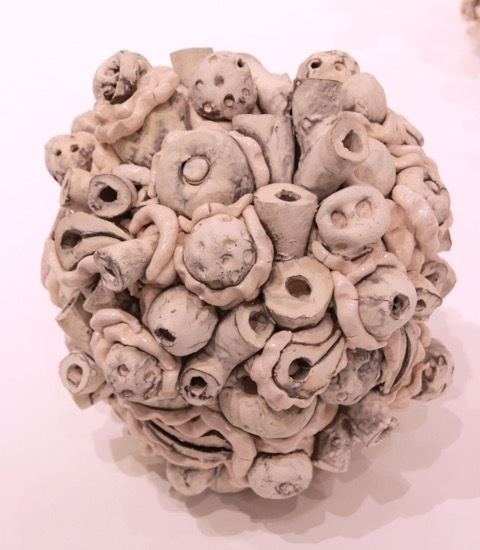 Section 2 comprises ten “mashup” works that abandon the pedestal format in favor of looser compositions. Rosen fabricates hundreds of ceramic forms and then combines them into surprisingly anthropomorphic structures that are perched atop steel structures that are outfitted with casters, like bizarre kitchen carts or work stations. With their ungainly, bulbous, bowling-pin forms and striped patterning, Nella, Rool, and Talley are wonderfully absurd and exuberant. 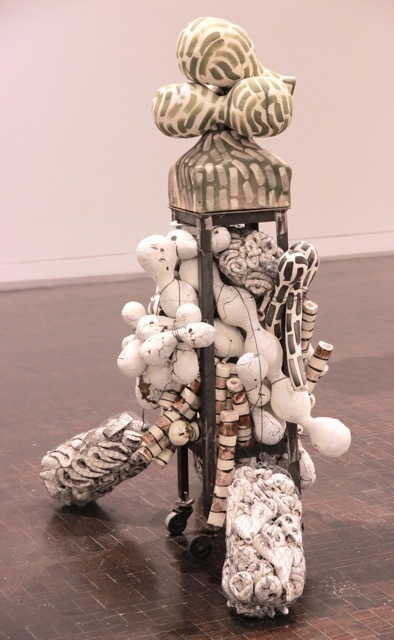 Section 3 features “mound” structures composed of hundred of pieces fired and refired “until failure and fatigue sets in,” to quote the museum notes, and then tied together with steel baling wire, which is sometimes covered with clay and sometimes left visible. The twelve small mound sculptures like “Atlas,” Block,” and “Fray, set on a low, round pedestal, suggest miniature landscapes, or Chinese scholar stones— as well as the odd confections that might have been crafted by Chef Philip Guston (in an alternate universe). 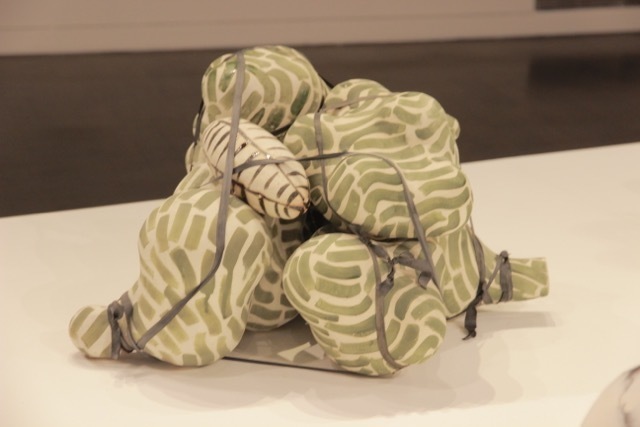 Section 4 is composed of six “bundle” sculptures, with the component pieces constrained by rubber straps (inner tubes?) rather than steel wire.

Section 5 comprises 28 works in acrylic, ink and gouache on paper that are related to the sculptures, since some are studies, but stand as independent abstract artworks.

This twenty-year retrospective, Rosen’s first in a Bay Area museum, is both fun and funny, as well as an object lesson in creative variety within aesthetic consistency. We get to follow the progress of sensibility that is combines humor, both wacky and a little mordant, with a fearless, restless creative drive. This thrilling exhibit is a visual banquet, an embarras de richesses, and should not to be missed. The Bay Area has another ceramic master to add to its pantheon.