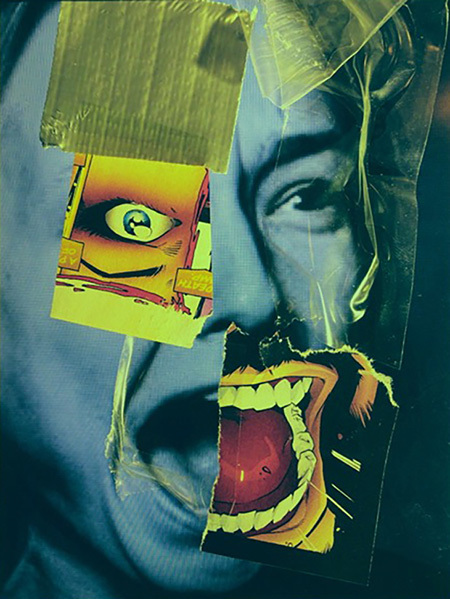 Christian Marclay, “Untitled (Death),” 2020 digital chromogenic print, 34 x 25”
Christian Marclay may be forever known primarily as the creator of “The Clock,” a 2010 video-collage loop that attracted critical accolades and widespread popular interest. Spanning twenty-four real-time hours, the film is crafted from 12,000 scenes appropriated from commercial movies that feature clock faces. Chronologically edited into an epic subversive anti-narrative, it is a moving and ironic tribute to movies, and, by extension, art as both an escape from and a consolation for human vulnerability to time and mortality. Shots of the same actors at different ages, of sunsets, of withered flowers and of lit cigarettes (which Marclay considers “the twentieth-century symbol of time”) recur in his wryly engaging contemporary memento mori. Marclay, in an interview: “We’re much happier when we don’t have to think about time. Here in this film, you have to think about time constantly ... This piece is really about the present though it’s made of fragments of the past.”
In his 2011 Golden Lion Award speech at Venice, Marclay wittily thanked the jury, and, implicitly, Andy Warhol, “for giving ‘The Clock’ its fifteen minutes.” “The Clock” may also remind art aficionados of the young Surrealists’ group nights out, viewing fragments of movies at a succession of theaters — anti-narrative channel-/web-surfing avant la lettre. (While the six $467,500 copies of the video are owned by major museums or wealthy collectors, excerpts are available online.)
Marclay, who is both a visual artist and a composer, here combines his dual interests in avant-garde performance (a ‘phonoguitar’ ‘performance’ (my air quotes) of a Jimi Hendrix LP with a strapped-on record player providing the audio) and composition (‘turntablist’ scores created by reassembling LP fragments) with traditional artworks, like the collages and digital prints. These new works feature cutouts from comic books and magazines that have been assembled into fractured, crystalline configurations that resemble Cubist and Futurist paintings. The hyperbolic anguish and horror of comic books, which would be camp if seen alone — compare this with the ironic approbation for Lichtenstein’s borrowings from masscult — remain somehow undiminished and even enhanced by the aesthetic fragmentation; as if the raw emotions of the comics, with their adolescent target audience, gain in power by being shared across the time that separates the artists. The power of these synthetic visions testifies to Marclay’s compositional (editing) skills, and further aided by the ragged, fraught emotions of the art audience of this peculiar moment, after a year of covid isolation and four (or forty) years of toxic predatory capitalist misrule.
Five single-image collages are included in Christian Marclay’s current exhibition. “Raging Fire” is an abstract apocalypse in red and orange flames excerpted from comic books. Its triangular shards evoke the destructive beauty of conflagration and the exaltation of destruction. After 1/6 it has become timely, but without rhetorical or polemical straining. It may be the source material for a stop-motion video loop of the same name (also on view), with flame fragments slowly wafted aloft. “Face (On Fire)” and “Face (Écorché)” depict floating faces, aflame or flayed (écorchés are plaster models of the skinless human body used in art academies to teach anatomy), eyes bulging, howling and buried in comic-book sound effects (SLAMM, SCREEEK, FWOOOM), like Medusa’s silenced head wreathed in snakes.
Nine digital chromogenic prints, probably slightly enlarged from their collage source material, accompany the collages. All are untitled, though they carry meaningful parenthetical qualifiers. “Untitled (Death)” and “Untitled (Crying)” present blue heads in extremis: female and male, by turns horrified and exultant, with the torn edges of the collaged eyes and mouths and even the pleats in the paper and wrinkles in the tape serving the expressionist emotional impact. In “Untitled (Pulp),” and “Untitled (Black),” the heads are reduced to gaping mouths all but buried by their congested matrices, while the ripped drawing of “Untitled (Torn)” achieves the dark pathos of a Bacon or Caravaggio.
Returning to Marclay’s musical side, the show also includes fifteen collages from which a print suite, “No!” has been created. The prints are unnumbered and unsequenced. Taken together they constitute the score for a future vocal improvisation.
views