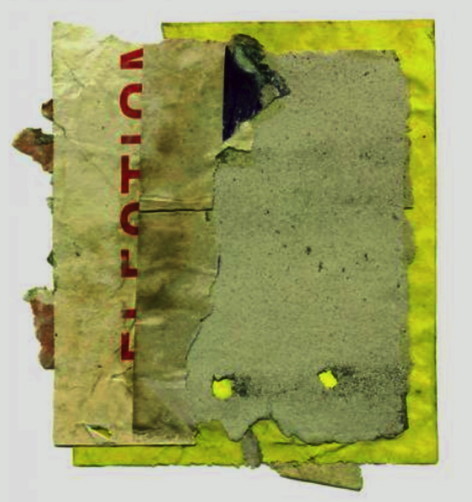 The genius-whiz-kid syndrome so dominates the world of contemporary art that exceptions to the rule are surprising and gratifying. The collages of Irwin Kremen, who began his five-decade career at age forty-one, in 1966, make a strong case for the unpredictability, even the anarchy, of the art impulse.

Kremen, a Duke University psychologist, had studied as an undergraduate at avant-garde Black Mountain College (Asheville NC), the American Bauhaus, boasting a unequaled roster of faculty and students: Josef and Anni Albers, John Cage, Willem de Kooning, Franz Kline, Robert Motherwell, Ben Shahn, and Peter Voulkos, among the teachers; Ruth Asawa, Stephen De Staebler, Ray Johnson, Kenneth Noland, Robert Rauschenberg, Dorothea Rockburne and Cy Twonbly, among the students. Kremer’s former writing teacher, the poet M.C. Richards, suggested that Kremen, who had frequented New York art circles before taking up psychology (incidentally, meeting Cage, who dedicated the score of 4’33” to him) try collage; and a later visit to Switzerland, with exposure to the works of Arp, Nicholson, Tobey and others, confirmed the artist, now ninety-two, on his path and vision. After twelve years of working in secret, Kremen was offered a show by the Smithsonian Instuitution.

The twenty-three collages on display, curated by BAM’s Lawrence Rinder, show Kremen working in the scavenging/recycling tradition of Kurt Schwitters and Robert Rauschenberg, transforming found elements into lyrical microcosms of precisely orchestrated color and texture. Kremen tears paper from old posters and flyers pasted to walls in locations ranging from Bruges, Belgium, to Berkeley. (Déchirage, tearing, was the name devised by the Surrealists for this aesthetic sampling.) He prizes papers marked by weathering: “I hunt out unduplicable papers, experienced papers, papers that have been in sun, in rain, in dust, in snows, covered with the dirt of the city.” Indecipherable fragments of writing punctuate the colors and textures of the papers, affixed to tiny hinges of Japanese paper, hinting at their past lives in the public realm of commerce before joining the Yeatsian “artifice of eternity.” Irwin Kremen / Matrix 265 runs until August 27. Berkeley Art Museum, 2155 Center Street, Berkeley (510) 642-0808; bampfa.org. —DeWitt Cheng