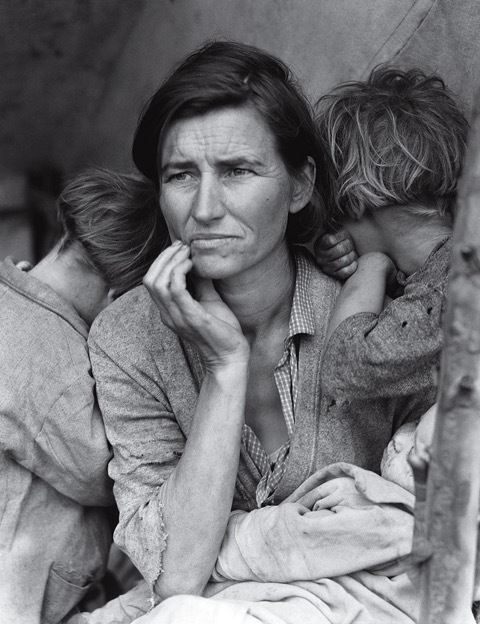 Sociopolitical art is back on the art menu these days, after a three-generation hiatus in the wilderness, banned by abstractionist and succeeding dogmas. If today’s art engagé suffers at times, however, from being overly abstract, \the career of the Bay Area photographer Dorothea Lange offers a counter-example of direct, sympathetic engagement. Her iconic photo, “Migrant Mother,” made while Lange worked for the Farm Services Administration, is universally known and admired. In 1936, Lange, driving home after a day’s shooting near Nipomo, saw a sign directing others to a roadside camp; Lange obeyed her instincts and turned around to investigate.

I saw and approached the hungry and desperate mother, as if drawn by a magnet…. I did not ask her name or her history. She told me her age, that she was thirty-two. She said that they had been living on frozen vegetables from the surrounding fields, and birds that the children killed. She had just sold the tires from her car to buy food. There she sat in that lean-to tent with her children huddled around her, and seemed to know that my pictures might help her, and so she helped me. There was a sort of equality about it.

The photo of the careworn Florence Owens Thompson flanked by her children, was used to build support for New Deal social programs, and became such a powerful symbol of the Depression years that Lange grew heartily sick of it and jokingly declared herself ‘divorced’ from it. Some hundred of Lange’s other works, donated by the Berkeley artist to the Oakland Museum in 1967, will be on view in Dorothea Lange: Politics of Seeing, along with vintage prints from this and other bodies of work, proof sheets, historic objects and personal memorabilia. As Faulkner said, the past isn’t even past. Dorothea Lange: Politics of Seeing runs through August 13; Oakland Museum of California, 1000 Oak Street, Oakland, (888) 625-6873; museum.ca.org. —DeWitt Cheng 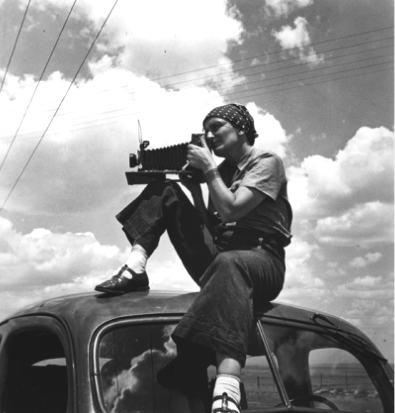