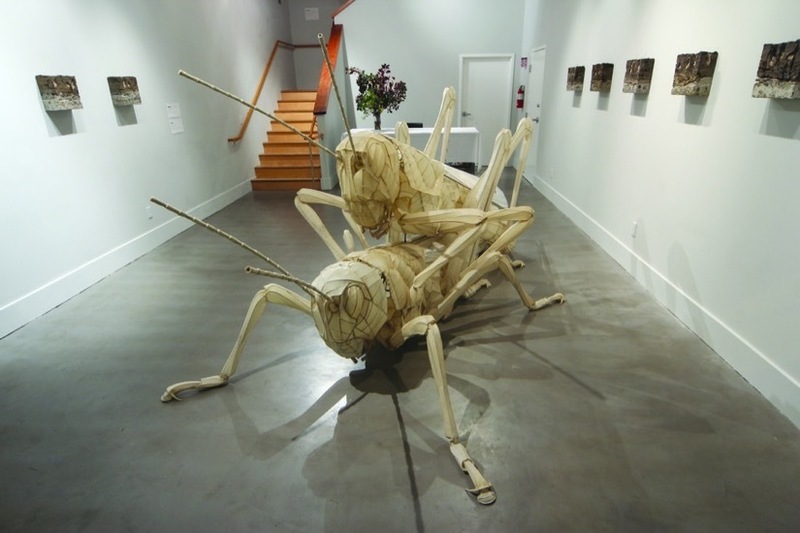 The recent art-world flap over the semi-abstract painting of  civil-rights martyr Emmett Till  points up how confusing it is nowadays interpreting sociopolitical art. Such is not the case, however, with the powerful and sometimes disturbing art of Cyrus Tilton, the young artist who died a few weeks ago of cancer.  From his first show, in 2010, at Oakland’s Vessel Gallery, it was clear that this young artist (he was then thirty-two), was uncommonly gifted both technically and conceptually, and that his would be a career to follow. Blending surrealism seamlessly with social critique, Tilton showed that imaginative art could be trenchantly observant about contemporary life, yet illuminate the human condition in all its complexity.

A Place In-Between, featured figurative sculptures with moving parts controlled by the turning of a crank, so that the viewer becomes physically and psychically involved with the subjects. “Relation" depicts a man, white as a plaster cast, seated atop a stool; turn the crank, and sepia-toned watercolor paintings flip by, showing him doing a stiff-necked head roll. "The Falling Dream" mounts a white oval sculpture of six slightly rotated faces with varying features (like double Trinities) atop a hand drill’s crank mechanism; the group head has been cut into independently movable eye, nose, and mouth sections, so that new face permutations emerge when the spinning stops. Other, non-kinetic pieces explore magic and metamorphosis, and the transubstantiations of art:  Tilton’s finely modeled figures are broken or incomplete in areas, exposing the steel armatures beneath.

In 2011, Tilton topped even his ambitious debut show, with “The Cycle,” an three- part show analogizing human depredation of the earth with the recurrent devastations inflicted by locust swarms. Locusts are grasshoppers that mutate when overcrowded; Tilton: "… Something happens to change the balance of the insects' ecosystem and all of a sudden, they're out of control, everything goes into overdrive .... They swarm. They eat themselves out of house and home and move on to another area." With the help of fifty volunteers, Tilton assembled “Individuals,” an eye-popping array of almost five hundred locusts, their whirring wings nicely rendered in gathered tulle; suspended like puppets on fishing line from a loosely articulated bamboo lattice that undulates, controlled by a motorized crankshaft, they drift back and forth, hypnotically, like reef fish in invisible currents.  Accompanying this tour de force was another showpiece, “The Lovers, “a huge pair of breeding locusts fashioned from steel tubing covered in beeswax-infused muslin, anatomically correct in their mouthparts, eye stripes, and tibia spurs. The third element of the show, “Potentials,” comprised mixed-media wall reliefs depicting, with the scientific precision Tilton learned in his work at Scientific Art Studio, in Richmond, cross sections of loose soil embedded with insect eggs and pierced by tunnels.

Fortunately, this psychological/environmental artwork will continue to gain a wider audience. The Crocker Museum in Sacramento will be exhibiting “The Cycle” beginning  March 25, 2018, thanks to Curator Scott Shields, and Lonnie Lee of Vessel Gallery has created a Kickstarter campaign to fund the donation of “The Lovers” to that institution. Crowd-sourcing to place our best local art in public collections? Yes, we are all individuals! 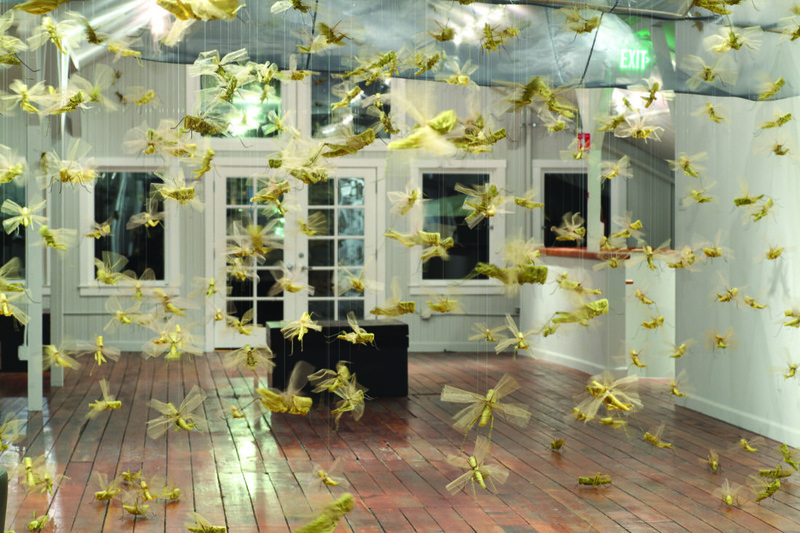