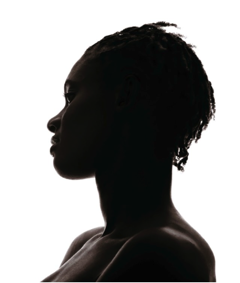 The recent flap over the Whitney Museum Biennial’s inclusion of a semi-abstract painting of Emmitt Till—the young black boy murdered and mutilated by southern racists—shows what a tangled web artists and viewers negotiate with inflammatory material like American race relations. Black artists seem to be able to explore the theme, understandably, with more discrimination, than some white artists, who can easily be accused of ideological carpetbagging, scandal being one of the major options in the careerist’s toolkit, as the controversies of the 1980s prove.

Erica Deeman, a black photographer born in England and now living in San Francisco, steps into this minefield with a series of photographs of anonymous black women that is stylistically conservative (and thus mildly subversive) but no less compelling for it. She shoots large color photographs of her backlit subjects in profile, or cameo, with the white background subtly modeling the women’s features, creating depth and dimensionality, possibly a metaphor for how people see others initially by skin color, and only later, with more exposure, come to see them as unique individuals. While the series in entitled Silhouettes, with a nod to Kara Walker’s cut-paper depictions of the racial crimes of the past—unbearable if depicted realistically (like the photo of Till in his coffin)—Deeman’s images are more correctly profiles, or cameos, a form far older than silhouettes, which take their eponym from Etienne de Silhouette, the 18th-century French minister of finance forced to impose economic austerities on the French people, lending his name, by metaphorical extension, to the ‘cheap’ cut-paper portraits popular at the time. (I do not believe that Kaspar Lavater’s physiognomic theories about race are relevant to a discussion of silhouettes.) The art-historically-minded will remember that cameos and silhouettes appear in ancient art in coins and medallions, and in early Renaissance portraits of the nobility, modeled after antiquity. Deeman’s contemporary photographs thus resurrect an ancient style in order to lend the weight and dignity of art history to her subjects; while stylistically unspectacular, their quiet authority and beauty will stand the test of time. Silhouettes runs through June 11; Berkeley Art Museum, 2155 Center Street, Berkeley (510) 642-0808; bampfa.org. —DeWitt Cheng 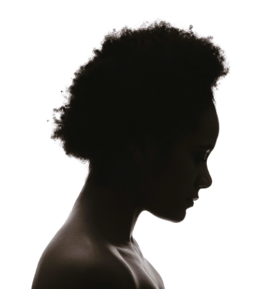