Frances Lerner: After All

The purpose of art is mystery.—René Magritte

Music, states of happiness, mythology, faces molded by time, certain twilights and certain places—all these are trying to tell us something, or have told us something we should not have missed, or are about to tell us something; that imminence of a revelation that is not yet produced is, perhaps, the aesthetic reality.—Jorge Luis Borges, “The Wall and the Books”

You would pluck out the heart of my mystery.—Shakespeare, Hamlet, Act III, Scene 2

American culture these days valorizes dichotomous thinking and polemical extremism as proof of seriousness and commitment, and balance (or compromise) is seen as inferior—tainted by compromise. The worst are full of passionate intensity, as Yeats says. When we eventually regain our sanity, perhaps the values of reasonableness and balance will again come to the fore.

The poetic, introspective art of Frances Lerner, of modest scale and subdued color, eschews the gaudy assertiveness of art-fair art, and exemplifies the values of synthesis and seriousness. Lerner’s paintings, prints, and assemblages (including her recent wool sculptures and paintings) tread the knife-edge between innovation and tradition with a sure foot; they’re mysterious, and preserve their mystery, but never descend into theatricality or flummery. They never “saw the air” with overwrought drama, like bad actors (either Shakespearean or Congressional).

After All surveys the past decade of Lerner’s work from four series, which are not displayed chronologically or thematically. Despite the stylistic differences, and the time-tripping into which viewers find themselves, the effect is not as jarring as mught have been expected Lerner’s compelling and consistent sensibility links everything, so the effect is less cacophonous than dialogic; the sibling works speak to each other. 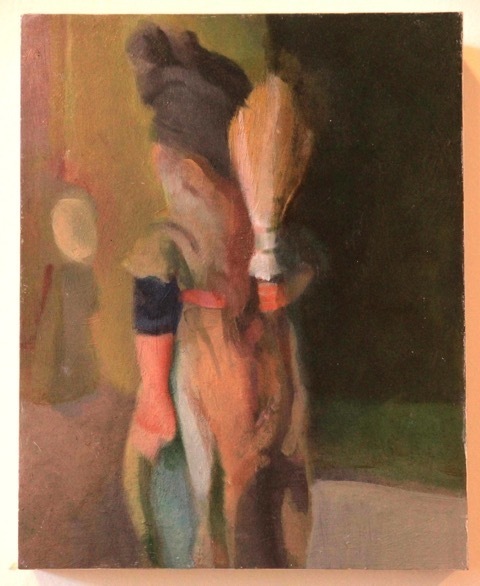 There Once Was A World, with its fairy-tale or fantasy title, comprises small paintings depicting puppetlike figures in circumstances that are unclear but intriguing. Lerner: “The main puppet, Lorelei, possibly an alter ego, is my metaphor for perplexity, paradox, and a woman’s predicament’; she is a “peasant, immigrant, orphan or artist in any sweatshop, factory or studio,” balancing inner-driven creativity and everyday practicality, to keep body and soul alive. The loreleis of German folklore were alluring river sirens that tempted sailors to their deaths, so Lerner is using the term ironically, perhaps hinting at majority cultures not only exploit but, adding insult to injury, demonize their victims. Minus that sociopolitical analysis, the paintings, inspired by a puppet that the artist purchased at a flea market, can also be read as commentary on the human condition; we’re all caught between assertion and powerlessness, like Hamlet’s fellow creatures, crawling between heaven and earth. “Lorelei and the Witch” (2007-8), “Lorelei’s Earthship” (2008), “Working Woman #1,” “Working Woman #2,” and “Working Woman #3” (all 2008), “Family” (2006), and “Oeuvre” (2008-9) depict Lerner’s troupe of puppet actors with varying degrees of pictorial clarity, with “Lorelei and the Witch” and “Stroll” depicting ghostly vertical presences, while “Working Woman #1”and “Family” define the forms clearly, but still enigmatically. Implicit in all of these images is a sense of magic metamorphosis, of matter come to life, but also vulnerable to dissolution and disintegration: liminal, or between stable states, to use the current phrase. Lerner’s fine draftsmanship and sense of form hold these tonal paintings—grisaille, with superadded color glazes—together.  WIth their subdued palettes and focus on the mysterious inner life of objects, these paintings are in a line of descent from Giorgio Morandi and perhaps Edwin Dickinson. 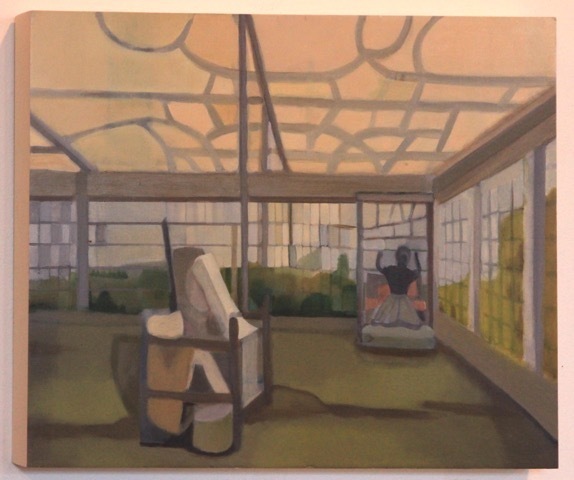 In Minor Characters and Sympathetic Criminals, Lerner expands her cast of characters beyond Lorelei and her family, to suggest narratives, albeit complicated and enriched by the artist’s abstract shreds-and-patches (to quote The Bard, again) patterning and color relationships. The enigmatic dramas of “Loom-Weavers” (2011-12), “Sympathetic Criminals” (2010-12),. “Benches 2”( 2011), “Benches 3” (2011), “Occupied Couple” (2011), “Saddled Head” (2011-12) and “Family Business” (2012) also feature larger architectural spaces, suggesting stage sets. In “Loom-Weavers,” the tapestry apparatus is generalized to abstract sculpture, almost architecture, while the woven branchlike patterning on a loom in the background carries over into the window traceries and even the ceiling. In “Sympathetic Criminals,” Lorelei sits slumped in a corner, hands upraised,  accompanied by a doll-like male companion in an indeterminate uniform who stands and regards her; occupying the left foreground is a large cloth or quilt of patchwork resembling window mullions and stanchions, a motif that recurs in “Occupied Couple.” “Family Business” depicts Lorelei and a small girl, both wearing headscarves, making their furtive way through an ambiguous space littered by vessels and spars that suggests both factory and stage, with a painted backdrop (or is it a large window?), abutted by a riser (or bed?), revealing a generalized cluster of buildings. 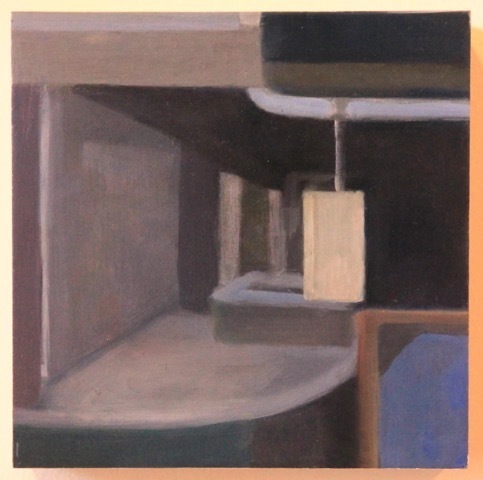 The Unlikely Companions series has an unlikely title, since the figures that formerly populated Lerner’s enigmatic dramas now disappear, with the semi-abstract backgrounds coming to the fore. Lerner: “For somewhat unknown reasons, I began buying old bellows, drawn both by the way they operate, feeding the fire with air [, and] the bellows’ rounded petal forms and angular shapes (similar in some ways to the misshapen Lorelei).... [M]y impulse was to pull the ...bellows apart and reunite them, forming a sort of hybrid.” The anthropomorphic bellows, which breathe and vocalize, appears in a transitional work, “The Arrest” (2015), with the huddled puppet couple, hands up in a shrug or surrender, beginning to unravel, as the background space obtrudes. Later works from this series—“Nineteen Sixty-Nine” (2013), “Syzygy” (2013-14), “CInders” (2014), “Locomotive”(2014-15), “Fortune” (2014-15), “Underground” (2015), “Puppet Torso Armor” (2015), and “Bees”( 2015-16)—read as mechanistic abstractions in the Dada-Cubist-Futurist style, with echoes of Duchamp and Picabia, but done in Lerner’s muted brown-gray palette and velvet-soft painting strokes: intimist metaphysical subversion, reminiscent of San Francisco’s Gordon Cook. During this period, Lerner began exploring unorthodox materials—wool, cast concrete, and found objects—in sculptures and wall collages or assemblages that add materiality to her concerns with time and mortality. “Cinders” (2014), “March” (2015), “Dickensonian” (2015-16), and “Bee Bellows” (2015-16) are probably influenced by the contemporary interest in abjection, but Lerner’s balancing of form, drama, and psychology keeps these small works, as well as the untitled “wool paintings” from this period, from the easy one-note irony to which other artists succumb.

Since 2016, Lerner has returned to figuration (at least her idiosyncratic version of figuration), working in oil on paper. “Garret” (2017-19), “Work Break” (2018), “Rollers” (2018-19), “ and “Waiting Room (2018-19) evoke the animated-matter imagery of the Minor Characters period, while “Headquarters Blossom” (2017-19) recalls the moody abstractions of the Unlikely Companions period. “Horses” (2018-19) and “Blue Horses” (2019) add an equine motif, perhaps an homage to that painter of spiritualized animals, Franz Marc? Concomitant with this return to the artist’s psychic homeland is a new direction. Lerner became interested needle felting, which is transfixing crumpled felt repeatedly with a threaded needle until it assumes a complicated and unpredictable form. Deconstructing hats, Lerner creates small sculptures like “Slice” (2016) that retain, despite its minimalist form, some vestige of human use and life.

In an era when art seems to have become thoroughly corporatized and commodified, mere easy fun, Frances Lerner’s practice stands for the value of self-expression and meaning. It is not “standing athwart history yelling Stop” (to quote WiIliam F. Buckley’s trope on opposing the stampede of New Deal liberalism), but, to those who believe art can and should be a serious affair, as Anselm Kiefer has declared, it’s heartening. Make art great again.