A Field of Words

Visual art employing words walks a tightrope between the visual and verbal realms once thought to be apportioned to the right and left, or intuitive and logical, sides of the brain. This theory is nicely traced in Leonard Shlain’s 1996 The Alphabet Versus the Goddess, which interprets human history in terms of male linear logic (the alphabet) and female intuition/imagination (the goddess), and remains readable and fascinating, even if the science has proven to be more complicated.

In looking at word art, similarly, we may regard them in two mutually exclusive ways: as pattern or calligraphy, or, even asemic (non-literal) faux writing, in the Dada mode, beautiful-nonsense graphomania with a hint of satire about the limits of speech and writing;  or we can imbibe the word or text, relegating the painting to a mere placard or sign, with the visual element insignificant: Hamlet’s “Words, words, words.” In A Field of Words, John Patrick McKenzie and Ward Schumacher demonstrate that word art can be both verbally and visually evocative, with the viewer’s activated eye and mind engaging multiple points of view. The field-of-words metaphor suggests both the cascades of glowing, scrolling text, the Matrix coding beneath sensorial, blue-pill reality; the featureless color mists of 1950s-1960s Color Field Painting; and the orderly inscription of the soil with parallel furrows for agriculture, and thus culture. 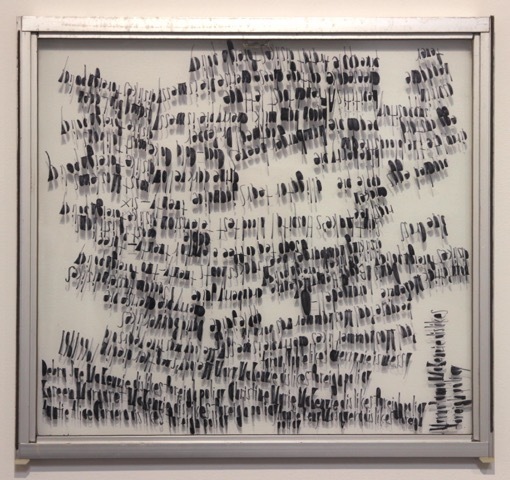 McKenzie’s marker drawings on a variety of objects—paper, scavenged window frames, and glass bricks—have a graffiti energy reminiscent of Basquiat, but without that painter’s figurative imagery. The irregular rows of hand-printed phrases and sentences suggest the magical charging of objects by spells and invocations. In a drawing from 2008-9, 1980, the artist writes simple subtraction problems that seemingly solve for unknown people’s ages: 1980 - 950 = 30, 1974 - 1962 = 12, etc.  The artist’s tall, narrow numerals suggest op-art stripe patterns, with the blackened closed loops of certain numbers (0, 6, 8, 9) evoking computer-countable ballots and tests. Joyce DeWitt likes pink high heels, in white marker on black paper, suggesting a schoolroom blackboard, records banal or obvious celebrity information on actresses (Joyce DeWitt, Susanne Somers, Florence Henderson, Sarah Purcell) and musicians (Ringo Starr, Paul McCartney), including whether they are “still alive.” (Why not 2014 - 1933 = 81, for On Kawara, creator of the 1978 painting, I Am Still Alive?)  Equally cryptic are the random, stream-of-consciousness inscriptions on five wooden and aluminum window frames and glass panes and on three glass bricks, where the writing is so profuse, complicated with shadows and reflections,  as to be almost illegible. Words emerge here and there—e.g., radio, toilet, Swoosie Kurtz, taco shell, future generations—but the staccato markings suggest syncopated music scores or player-piano scrolls rather than script, an urgent profusion of mystifying words and phrases: Dada glossolalia. 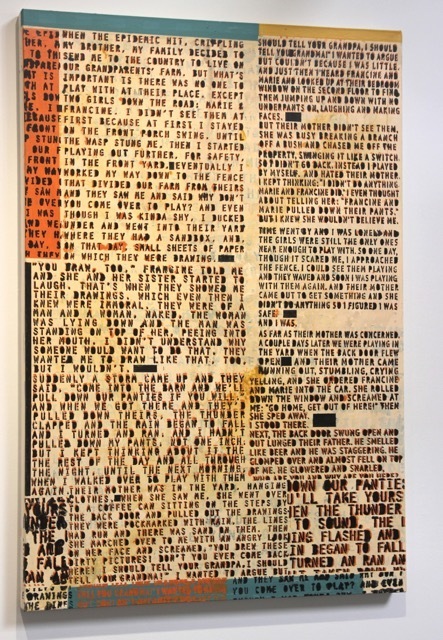 If McKenzie employs writing less for literal meaning than to claim esthetic territory from non-art reality, Schumacher builds densely layered acrylic paintings on canvas of text, stenciled in black capital letters over gray and ocher backgrounds. The lettering is not clean and crisp, however, but deliberately imperfect, with blotches where the painting leaked under the stencil, and the texts layered in different colors, out of register, like Warhol screenprints, creating shadows or ghost images. The bleeding effect of the ’ink’  recurs in Schumacher’s works on paper, made on paint thickened with wheat paste, and bound in  books, several of which are on display by request. The lengthy texts recount the artist’s dreams and memories, “some fact and some fiction,” so the paintings serve as a kind of diary — perhaps of a fictional avatar escaped from an Eric Fischl painting. Russian Consonants (2020) is a stream-of-consciousness monologue on the fascinating oddments of Russian language and history, including Tsarskoe Selo, skoptski, Bolsheviki, and the lecherous mad monk, Rasputin. Horse, With Peonies (2020) recounts (with blocks of text reversed to white on black, as if poorly redacted) a dream of Freudian and Oedipal horror mixed with humor that is concluded by a mysterious equine visitor. Drawing Dirty (2021) introduces two young sisters who tempt the boy narrator with glimpses of nakedness and of dirty drawings for which he is unjustly condemned. Last but not least is I Need Do Nothing (2005), an eight-panel painting two feet tall by sixteen wide, with the walking-meditation mantra repeated endlessly, like “All work and no play makes Jack a dull boy,” in The Shining, but with more rewarding results. Peruse the sides of these eight panels—there were originally ten—and you will note that the writing continues perfectly along the sides — although, presumably, not the back. Remember Jasper Johns’ stenciled words going off one edge of the canvas and continuing on the other side, as if the painting had been peeled from a cylinder. Schumaker’s love of ‘overall’ abstract painting, i.e., without traditional figure or ground, as practiced by Pollock, Rothko and Kline, combines with his dreams, memories and reflections in these humorous, mysterious, semi-fictional artifacts, or manuscripts, or handmade faded newspaper clippings.