« Back to blog
GARRY KNOX BENNETT: Illumination: Time, Containment and Bling
Transmission Gallery
Illumination: Time, Containment and Bling is an exhibit of twenty-three table lamps, boxes, clocks by Garry Knox Bennett, the legendary Bay Area artist and craftsman, renowned for chairs, tables, sideboards, desks and jewelry —several pieces of which are installed in a gallery vitrine—that match exquisite craftsmanship with Dadaist/Funk humor and wit. If the Bauhaus, that German academy of modernist style, was originally intended to marry traditional guild-based craftsmanship with modern technology and a machine esthetic, Bennett might be said to embody the Bauhaus beau idéal—that is, if Bennett had studied at the Bauhaus or any of  the postwar American institutions that followed, and if Bennett, who considers himself mostly self-taught (despite a stint at Oakland’s California College of Arts and Crafts). Had there been “Alumni Bauhaus” (or “Alumni Black MountainCollege”) bumper stickers, it is pretty certain that the self-directed artist—who hated high-school academics and preferred the solitude of shop class—would have laughed uproariously at the absurdity of the idea. In an interview, Bennett recounted his entrance into grad school: “I’m generally the biggest guy in any factory, and they’re going to give me all the hard work. And I said, ‘I think I’ll go to art school.’  So I went to Arts and Crafts. And it was the best thing I ever did.” His exit was equally fortuitous: ‘But, yeah, it was good, man. I mean, it was a good environment. They didn’t have any goddamn English classes. When I left, the rumor was they were starting an art history class. I said, “I’m outta here. I’m outta Dodge.’
Bennett’s larger-than-life personality is evident throughout out the lamps, witty sculptures more appropriate for  sculpture pedestals than surrounded by utilitarian iMac bric-a-brac on desks or nightstands. Bennett’s stunning mastery of a variety of materials and methods deserves to be appreciated as art, the expression of a creative sensibility transforming and transcending there purposes as utilitarian objects—and contravening the recently popular (and maybe only partially ironic) notion of art as futilitarian “useless work.”
Five of the lamps seem to me to derive from Surrealist sculpture, wherein various biomorphic characters (personnages) engage in mysterious doings: think of Tanguy, Ernst, Arp and Mirò. “Sergeant Pepper Lamp” (1996) the fanciful psychedelic Art-Nouveau vibe of its Beatles namesake, while “Cloud and Lotus Lamp” (1997), based on stylized motifs from Asian art, resembles a crouching cat or monkey from whose head a golden parasol emerges. “Blowtorch Lamp with 4 Lights” (2013) suggests the non-functional. absurdist human-machine hybrids of Dada,with its coffeepot/torch powering flame-shaped a quartet of Christmas-tree lights; the similar “Three Arm Lamp” (2014) employs the same flame-like bulbs, but here they emerge from the he'd of a simplified human or robot form who stands atop a blocky trident-shaped pedestal.  “Flowers” (2009) is an exotic garden of four or five varied lightbulb flowers—round, flame-shaped, mushroom-shaped, and tubular—that unite botanic with luminous efflorescence.
Other lamps are cleverly subversive variants of traditional lamp forms. “Paper Coffee Cup Lamp (2014) and STDBA #43” (2016) employ a paper coffee cup and a tuna-fish can as substitute reflectors, with hefty bases serving as sculptural pedestals. “Column with Dome Lamp” (2017) and “Post-Memphis Lamp” (2007) are such elegantly idiosyncratic that they might have come from the Memphis Milano design studio of the postmodernist architect Michael Graves. Postmodernist borrowing of architectural motifs for domestic objects and vice versa can be seen in Bennett’s small but monumental boxes and cylinders, which might almost be maquette for colossal monuments.
F. Scott Fitzgerald once noted the there are two types of people: those who divide the world into two types of people, and those who don’t. The apotheosized furniture of Garry Knox Bennett shows that he is clearly with the stubborn resistance. 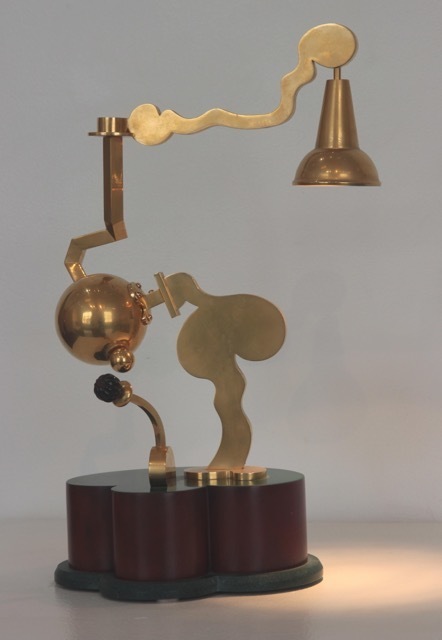