« Back to blog
HOLLY WONG
Phoenix
Slate Contemporary
The recent election of the reality-based Biden administration, replacing the disgraced faith-based follies of the Trump court, gives us a glimmer of hope as a respite from the dark madness of the past four years.
With much of the populace newly vaccinated, art venues are beginning to reopen; this is a relief to art aficionados suffering from esthetic withdrawal for which Zoom calls were a poor placebo. The melancholy isolation necessitated by the pandemic and the emerging general sense of a social reawakening (except for the cultists who are just now considering masks—to protect themselves from the vaccinated!) are the subtext (though not the subject) of Holly Wong’s solo show, Phoenix. That immortal bird of Egyptian mythology (and later Greek and Roman mythology) when aged, builds a bonfire, immolates itself, and rises, reborn, from the ashes; hope is “the thing with feathers,” as Emily Dickinson writes. Wong’s phoenix is composed of graphite drawings on mylar pieces that have been stitched together, forming an eleven-foot tall/wide free-form work suspended mid-air by monofilament. Swirling tapered forms covered with both organic (bubbles, droplets, tendrils) and geometric patterns (grids, nets, pixels) rise like tongues of flame, or feathers borne aloft by heat; the bird and the bonfire merge into a baroque-abstract symbol of destruction, purification and renewal. Wong is interested in Eastern lore, as well, citing Buddha’s Fire Sermon (as T.S. Eliot did, in The Waste Land), words of perennial (and perennially necessary) wisdom praising detachment from the ever-attractive “fire of lust, … fire of hate, … [and] fire of delusion.” 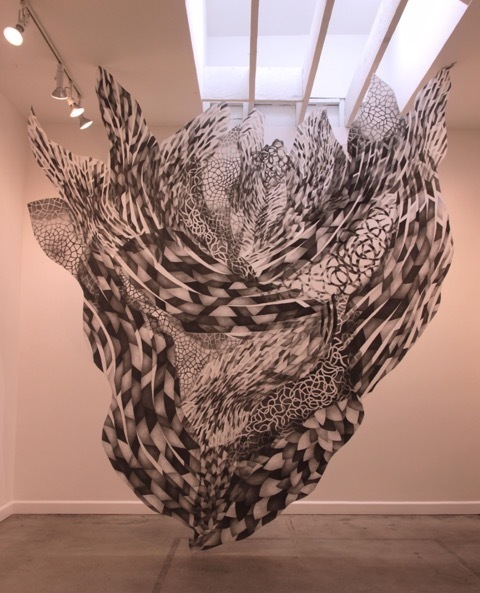 Accompanying Phoenix are eleven small to medium-sized framed pieces reminiscent of nests or thickets, also made of sewn-together graphite drawings on mylar. The titles derive from classical mythology: Aurora, the goddess of Dawn, symbolizing rebirth; Arachne, the seamstress whose hubris led Athena to transform her (mercifully, as she had hanged herself) into a spider, a fitting spirit animal for the seamstress artist; Persephone, carried into the underworld to marry its king, Hades, but allowed to return to the surface each spring; Bia, the Greek goddess of force, who helped Zeus defeat the Titans and chained Prometheus to the rock for stealing fire; and Calypso, the nymph abandoned by Odysseus (another textile artist) after a seven-year dalliance. Six works are dedicated to Fellini’s betrayed yet resilient (and spiritually adept) housewife, played by Fellini’s wife, Giulietta Masina, from 1965 movie Juliet of the Spirits: art correcting life. 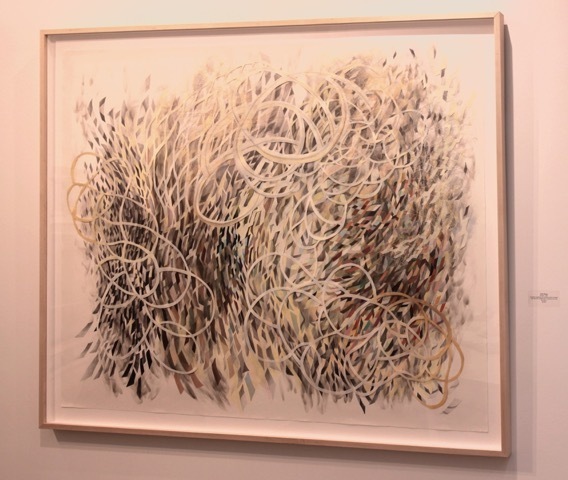 Wong’s interests in feminism, myth, and the power of the imagination are certainly relevant in the current cultural moment, since women voters played a decisive role in de-platforming our hubristic baby tyrant, but the artworks carry their subtexts lightly, subliminally. Wong begins with spontaneous, unplanned drawings of tangled skeins of swirling tendril and banner forms. She adds colored pencil and gouache paint, and softens the forms with atmospheric candle smoke (Surrealist fumage) to create shadow and depth to her interwoven, interlaced traceries. Because mylar drafting film is tough and translucent, she can cut it and reassemble the pieces with sewing machine, as well as draw on both sides. Wong’s take-off point from the subconscious and her immersion in craft and process and the slow emergence and evolution of the image push these works beyond postmodernist polemics into the beauty of complexity of art, a PIcassean lie that tells the truth and sometimes a Brechtian hammer with which to shape the world.
views