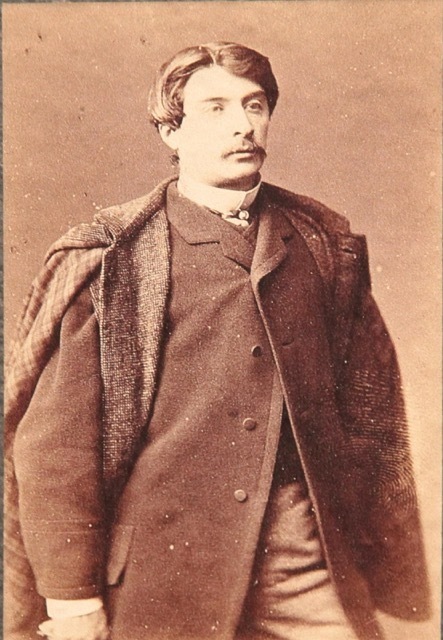 In Thomas Mann’s final, unfinished novel, The Confessions of Felix Krull, the young confidence-man protagonist—antihero is too strong a word—recounts that his father, an elderly roué, took great pleasure in merely reciting the words, les jolies femmes. I was repeatedly reminded of this deplorable but comical figure as I perused the glittering, splendidly painted depictions of haute bourgeois leisure in the San Francisco Legion of Honor’s current exhibition, James Tissot: Fashion & Faith.

Tissot (1836-1902), né Jacques Joseph Tissot, in the port city of Nantes, was the son of a wealthy drapery merchant, but decided as a teenager to forsake the family business, to his father’s chagrin. This defiance of paternal expectations, however, turned out well, as Tissot’s career took off immediately. His blending of classical Ingrist realism and Romantic literary subject matter in The Meeting of Faust and Marguerite (1860), possibly influenced by the antimodernist English Pre-Raphaelites, garnered the twenty-four year old artist a 5000-franc purchase from the French government. 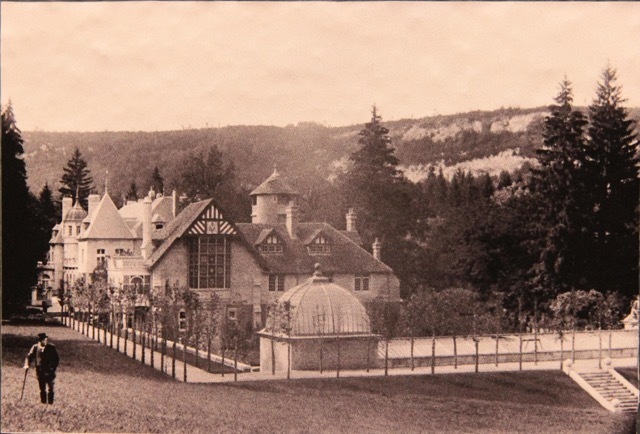 In the early 1860s Tissot abandoned historicizing imagery to focus on the depiction of his contemporaries—Baudelaire’s “heroism of modern life”— although his subject matter in portraits and semi-narrative paintings remained the wealthy upper classes with which he was socially connected. In 1871, he inexplicably (considering his conservative Catholic background) fought on the side of the Paris Commune; and when the rebels were exterminated by the government, he sensibly relocated to London (as some other leftist artists did), where his virtuosic paintings of exquisitely turned out jolies femmes, both French and English, found favor with British industrialists. In 1872, the thirty-something painter earned nearly 100,000 francs—the wages of a merchant prince of the day. Tissot knew the Impressionists—Degas painted his portrait—but kept his distance from them professionally, and stylistically, for the most part. He shared their interest in Japanese culture, however, filling his large manorial home in London (in bohemian St. John’s Wood) with exotic collectibles that found their way into his paintings, as did his lordly home and its grounds. 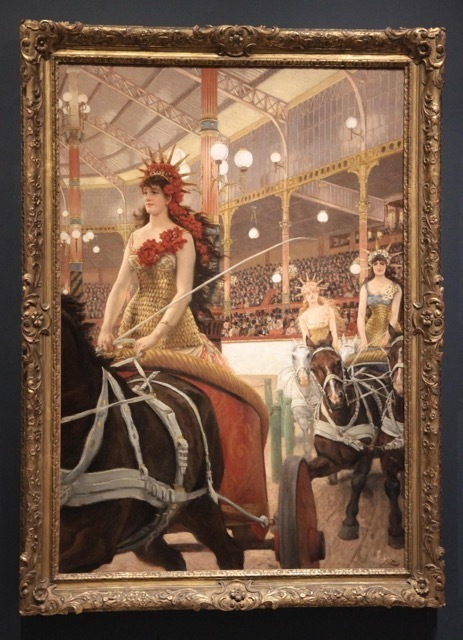 The exhibition is well organized, presenting a clear picture of the artist’s development (though it’s curiously lacking in his voice), and beautifully presented— a visual delight, but not an emotional one, despite the drama of Tissot losing his youthful muse, La Mystérieuse, Kathleen Newton, to tuberculosis (‘consumption’) and his subsequent embrace of séances and spiritualism, and painting, in his sixties, with mostly undistinguished results, Christianity’s Greatest Story Ever Told. If Robert Hughes once opined that Barnett Newman’s Stations of the Cross were no match for Titian’s, it’s fair to note that Tissot’s spooky illustrations of the Passion are no competition for Michelangelo or Piero della Francesca. A few other qualifications are in order: Tissot’s drawing is sometimes off the mark, with disconnected body parts emerging from the extravagant costumery without evoking the body underneath, and it sometimes even verges on the caricatural (“Painters and Their Wives,”); his restrained but knowing satires of the lower orders now look dated and elitist (“Provincial Woman,” “Too Early,” “London Visitors”): and the scenarios that he depicts are sometimes lacking in realistic space or lighting; they look assembled from various parts, without the rhythmic unity and grouping of the Renaissance painters like Carpaccio, an early influence (“Departure of the Prodigal Son” and “Return of the Prodigal Son” from 1862-3; “Rue Royale”). 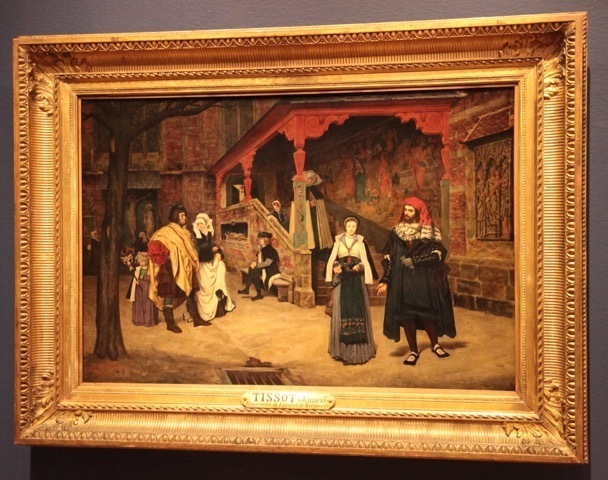 That said, Tissot’s apotheoses of young, attractive, wealthy women—continental Gibson Girls— record Belle Époque Europe with the discerning eye of a tailor or seamstress (due to his family background) and a master showman’s delight in painted spectacle, with Tissot’s extraordinary attention to detail undoubtedly a compelling selling point for patrons used to hard-headed cost analysis. (Four of the paintings, all of high quality, now belong to San Francisco grandees.) “Safe to Win,” “The Fan,” “Young Women Looking at the Chinese Temple,”  “Young Women Looking at Japanese Objects,” “Portrait of Mlle L.L.” and “Portrait of the Marquise de Miramon” are stunning works of indisputable, irresistible charm and verve. Tissot’s more poetic, spiritualized, gauzy, stagy images, tending toward kitsch, are less successful, at least to contemporary taste. 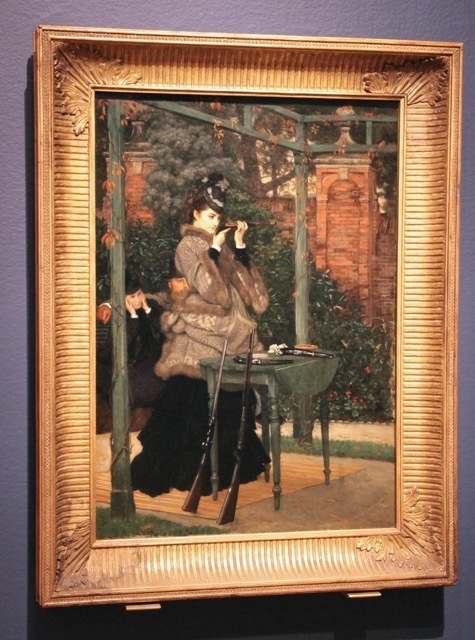 The problem for a contemporary MeToo audience, naturally, lies not in the aesthetic realm but the sociopolitical one, depicting, as they do, women as delicate, decorative beings, however gloriously painted. It’s unfair to judge the past too harshly by present standards, which seems to be a popular blood sport among irate Procrustean virtue-signalers these days, but the nineteenth-century status of women has to be considered in the case of Tissot—who was one of many artists engaged in what could called the Male Gaze market. (See Peter Schjeldahl’s recent take in The New Yorker on Renoir.) Bram Dijkstra in Idols of Perversity: Fantasies of Feminine Evil in Fin-de-Siècle Culture, postulates that bourgeois women of that time, uneducated, confined and cosseted, were seen as the repositories of Christian virtue and innocence in the dog-eat-dog world of capitalist competition; and that when they fell short of that unrealistic Hedda Gabler baby-woman pedestal, they were misogynistically transformed into the harpies, vampires and succubi of Symbolist art: ancestresses of America’s castrating woman politicians running pedophile rings from pizza parlors. The truth is not always beautiful, nor is beauty always truthful: teachable moments for an audience addicted to glamor (etymologically, a magic spell), sensationalist drama, and low-rent entertainment.  —DeWitt Cheng 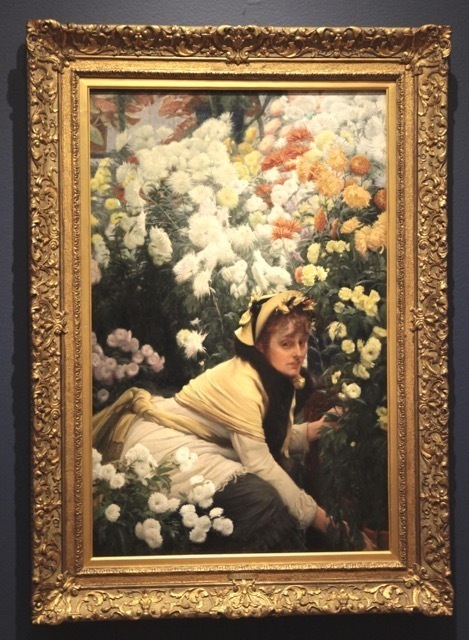