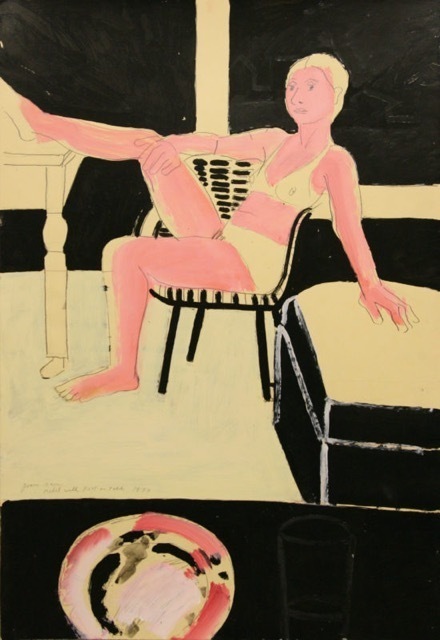 In 1958, the twenty-year-old Joan Beatty, about to marry, was ill and bedridden; art books provided by her fiancé, the painter Bill H. Brown, changed her life. She later recalled: "I'd never seen any of this stuff”—i.e., on Rembrandt, Goya, and Velasquez—“and I felt this tremendous surge of energy.” Enrolling at the California School of Fine Art, she was encouraged by her mentor, the painter Elmer Bischoff (later a colleague at UC Berkeley), to find her own artistic way, and she worked through Bay Area Figuration, beat and funk toward her mature style, which combines a refined lyricism with the kind of eccentric-outsider outlook which the Bay Area nurtures.

In San Francisco galleries in the 1970s and 1980s, Brown was, if not ubiquitous, at least highly visible; some of us young know-it-alls found her simplified drawing, flat modeling and bright colors a bit too easy to like, Matisse for the masses; and the autobiographical element too sweetly northern California and even New Age, Kahlo without the angst. However, when the painter died in 1990 at age fifty-two in an art-installation accident in India—she was a follower of Sathya Sai Baba—her thirty-four year long creative life assumed a retrospective gravitas that had always been in the work, just not foregrounded. You can see the depth of her emotion in the early Abstract Expressionist works of the late 1950s, caked and crusted with oil paint. The artist Wally Hedrick said of her: "There was the innocent child, sort of flowing through time, and there was the mature artist, and they just happened to be in the same body at different times." He also remembered Bischoff’s non-judgmental judgment: “I have this extraordinary student. She's either a genius or very simple.”

Is that a false dichotomy? The art world is quick to move on to the eternal new, so fans of Brown as well as those unfamiliar with her work are well served by Joan Brown: In Living Color, a selection of works on paper borrowed from private collections. Through November 18. Richmond Art Center, 2540 Barrett Street, Richmond; (510) 620-6772; www.therac.org. —DeWitt Cheng