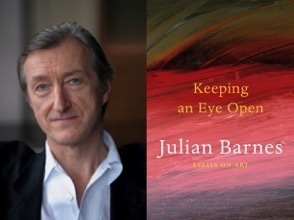 Eyes Only: Julian Barnes' "Keeping an Eye Open: Essays on Art"
I used to read fiction, but in recent years have found nonfiction about art, history and politics more relevant and interesting. Nevertheless, I found the novelist Julian Barnes’ 2015 collection of essays, Keeping an Eye Open: Essays of Art, enthralling, combining a fluent, almost conversational style with thoughtful commentary backed with a fair amount of what Herman Melville called swimming though libraries. Barnes never studied art formally, but clearly did his homework—no Great-Writer vaporizing!—while preparing his “one go” reviews of painters from Géricault to Hodgkin: reading Anita Brookner on Delacroix and Baudelaire; Alex Tanchev on Cézanne; and Redon on Redon, among, undoubtedly, many others. Barnes’ judgments are sound, based on his sympathy with other creative artists, and expressed in a “companionable and untheoretical” (as he declared in an interview with The New Yorker) manner that is both colorful and readable—and sometimes memorably pungent. It is impossible not to provide a few tasty excerpts.On the massive ego and inveterate self-promotion of the Realist Gustave Courbet: “Shout loud and walk straight” was apparently a Courbet family maxim, and throughout his life—in person, in paint and in letters—he shouted loud and listened delightedly to the echo. In 1853, he called himself “the proudest and most arrogant man in France.”... By 1867, [he declared] “I have astounded the whole world ... I triumph not only over the moderns but over the old masters as well.” ... He also wanted to accept and refuse ... [official recognition]. He needed the public offer of a declaration so that he could be publicly offended by it. ... [The artist Honoré] Daumier, ... had been offered the Legion d’Honneur earlier that year, [had] refused it discreetly. When Courbet upbraided him, Daumier, ever the quiet republican [anti-monarchist], replied, “I have done what I thought I ought to do. I did, but that is no business of the public.” Courbet shrugged his shoulders and commented, “We’ll never make anything of Daumier.  He’s a dreamer.”On the anomalous, almost-Michelangelesque musculature of the dying shipwreck victims in Géricault’s massively researched 1819 painting The Raft of the Medusa: ...but why does everyone—even the corpses—look so muscled, so… healthy? Where are the wounds, the scars, the haggardness, the disease? These are men who have drunk their own urine, gnawed the leather from their hats, consumed their own comrades. ... [F]or all its subject matter, Scene of the Shipwreck [the original title] is full of muscle and dynamism. The figures on the raft are like the waves: beneath them, yet also through them, surges the energy of the ocean. ... It is because the figures are sturdy enough to transmit such power that the canvas looses in us deeper, submarinous emotions, can shift us through currents of hope and despair, elation, panic and resignation. ... We don’t just imagine the ferocious miseries ... They become us. .... How hopelessly we signal; how dark the sky; how big the waves. We are all lost at sea, washed between hope and despair, hailing something [the rescue ship Argus, in the distance, which failed to see the raft at first] that may never come to our rescue. And finally, on a more cheerful note, here’s Barnes on the philistinism of the chic: In Amsterdam I was halted in front of the late and leering Cyclops [by the visionary Odilon Redon], uncertain what to make of it, when a party of Frenchwomen came past exuding that breezy yet proprietorial manner which somehow only the French are confident enough to affect in art galleries. The first woman donated to the painting a glance and crisply announced, as if art were merely life, “Ah, quelle horreur!” This ... caused her to companions to pause briefly and tame the portrait of the one-eyed giant. ”C’est une dorade,” suggested one, “Non, c’est un turbot,” replied the other; and having thus despatched Redon to the fishmonger’s stall, they passed on to the flowers. “Ça, c’est beau.”
views