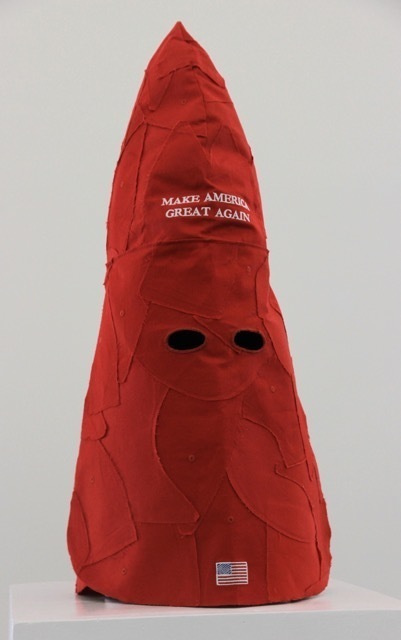 “It can’t happen here” used to be Americans’ complacent response when confronted by reports of political upheaval and revolution in Third-World countries. It was a comforting thought, but an illusion, that we were somehow able to sustain despite many warnings in books, movies and popular culture. Sinclair Lewis’s 1935 novel, It Can’t Happen Here, portrayed the rise of a fascist demagogue. Jack London’s 1908 novel, The Iron Heel, had treated the theme two generations earlier.  1984 and Brave New World were universally read by high-school students, and cited as bywords. In addition, repressive inhuman states have been a staple of realistic films like The Black Legion (1937) and A Face in the Crowd (1957) as well as the various dystopian iterations of Star Wars, The Matrix, and the hyperactive Marvel Universe. Were we not entertained? The increasingly corrupt, bullying, incompetent and destructive acts of the Trump administration teach us that history is not to be mocked or ignored; nor, considering the weather reports, Sharpie-enhanced or not, is it nice to fool Mother Nature, either

Artists are making a stand against humanity’s slide into catastrophe. The Maryland-based artist Kate Kretz employs a mixed-media, conceptualist approach to examining the burning issues of the day, and Jen Tough Gallery scheduled a solo show at its location in Benicia CA, an hour’s drive north and east of San Francisco, liberal Ground Zero. Unfortunately, some of the good people on the extreme nationalist side found out about Kretz’s creation of “Hate Hat,” a Ku Klux Klan hood fashioned from red MAGA caps, and began harassing her online. Their complaints about her ostensible violations of “community standards” resulted to Facebook’s temporary suspension of her account; and  phoned-in threat to the gallery was taken seriously in this era of random partisan violence.

Jen Tough found an unused gallery location in San Francisco and kept its location secret until just before the weekend of August 2-4, when interested parties who had signed up online were informed via e-mail. As it turned out, the location, near the Minnesota Street Project in San Francisco’s gentrifying Dogpatch area, was inspired, and the exhibition, monitored by a trio of young security guards, was well attended and proved to be incident-free. San Francisco liberals could take pride in having stood up to the numskulls and yahoos who were in reality, like the Proud Boys in April, less than formidable, despite their bluster.

Kretz’s work takes such diverse forms that it is quote possible to attribute them to several artists.  Her themes are, besides the racist terrorism of the extreme nationalists, which dates back four centuries, American society’s current wave of sexism, misogyny, religious fundamentalism and its de-facto guns and rape cultures pervading not just the rural south, but, shamefully and cynically, the corridors of power and prestige.

The artist deconstructs the symbols of fear and hatred by combining them with real-world objects, and humble, homemade fabrication methods.  She creates a red Nazi armband from unsewn MAGA caps in “Only the Terrorized Own the Right to Name Symbols of Terror” (2019), and embroiders a swastika inscribed, “Make America Great Again,” a phrase used by both Reagan-Bush in 1980 and by the insurgent Republican Pat Buchanan in his infamous red-meat fascist-rally speech to the GOP convention in 1992. Likewise, “Eminent Domain for Unwilling Vessels” (2019) transforms the inner parts of MAGA caps into the white bonnets worn by the breeder-stock class of women, the offered Offreds, in The Handmaid’s Tale.

White-male privilege and power in all its brutal stupidity comes under attack in both deconstructed works, like those just cited, and in traditional paintings on canvas or board and drawings on paper. “Readymade: Brass, with Lock” (2014) recasts one of those commercially available bumper scrotums (TruckNutz—I am not kidding), made of silicone, in brass, with its connotations of shameless ostentation, and outfits it with a lock and chain: a chauvinist male chastity belt for the immature-ejaculation community. “V.I.P (Very Important Penis)” (2018) is a gold-plated erect member‑—‘ithyphallic’ is the art-historical term—bearing a “VIP All Access” dogtag. Continuing the theme of threatened-male ultra-violence is “Rupture” (2018), a simulated but embroidered bullethole in glass with an aureole of radiating cracks fashioned from the gray hair of people (crowd-sourced) who have suffered devastating loss.

Kretz’s representational skills are evident in several drawings and paintings satirizing the misogyny and cruelty of gun/phallus culture.  “Appetites of Oligarchs” (2018) is a large, dramatic painting on canvas depicting a man, dressed only in an unbuttoned white shirt, faceless and pot-bellied, boldly masturbating in front of a nocturnal industrial landscape. “Gunlicker I” through “Gunlicker IV” (all 2015) are 16”x20” oval-format paintings depicting engrossed young men passionately fellating firearms. “Testosterone,” Kretz’s portrait of a snarling bulldog with the word inscribed in cursive text beneath, reminiscent of Magritte’s word paintings, and a glittering frame worthy of a pop icon, mock-extols the current notion of manhood as aggressive dominance in our capitalist-winner-take-all society.  “Democracy Detox” (2019) is a colored pencil rendering of a limousine in up in flames, with JUSTICE 4 ALL spray painted on the door. Finally, “Futile Fantasy:  A Glimmer of Self-Awareness, & The Subsequent Remorse”  (2017) is a portrait of our self0styled favorite president, ‘woke’ at last to his wasted life: tearful, despondent, and repentant, like a baroque sinner finally turning saintly: wishful thinking for those of us who are totting up the damage costs of this disastrous and depraved regime which Kretz has depicted with saeva indignatio, ferocity and rage. — DeWitt Cheng