If the title of this exhibition, Cityscapes, suggests panoramic views from some of San Francisco’s new apartment towers looming over its boarded-up street businesses, the subject matter of Lynn Sondag’s lyrical watercolors, however, is more bucolic. Sondag focuses on the northwest quadrant of San Francisco, north of Golden Gate Park, where she lives, and, to use John Muir’s terminology, saunters, with an observant eye. San Francisco—ineffaceably dubbed The City by San Francisco Chronicle columnist Herb Caen—is still a walker’s town, and these paintings reflect the artist’s strolls around the Richmond District, Lake Street (branded the Lake District by the real estate market seeking Wordsworthian nature-lover cachet), Golden Gate Park, Seacliff, The Presidio, Mountain Lake Park, Crissy Field, and Ocean Beach. Cityscapes comprises sixty-odd paintings from several series executed during the past twelve years, concluding with the Lake Street series from 2020,  depicting scenery only a block or two from Avenue 12 Gallery.

Sondag, a professor of art at Dominican University, grew up in the Midwest, and brings her love of nature to the Bay Area, famously rich in natural beauty and distinctive architecture. While the viewpoint of the paintings and their fresh immediacy suggest a plein-air, on-site painting practice, Sondag works from reference photographs, and reconstructing the scenes in her studio. (Photographers will note that her framing has the 2:3, 3:4 and 9:16 aspect ratios of digital SLRs. ) There is nothing photorealistic about her loose, atmospheric renderings, however, which seem to record her feelings about the scene as much as the facts of weather, architecture and foliage. The art historian Barbara Novak, describing the conflict in early American painting between realist and Transcendentalist impulses, between objective and subjectivity, cites the painter Thomas Cole, who worked from memory, trying to “get the objects of nature, sky, rocks,, trees, etc. as strongly impressed on my mind as possible ... [B]y looking intensely on an object for twenty minutes I can go to my room and paint it with much more truth than I cold if I employed several hours on the spot.... I become more intimately acquainted with the characteristic spirit of nature than I could otherwise do.”

If photography serves as Sondag’s sketch book, replacing Cole’s twenty-minute fixed gaze, the sense of place must surely be recorded in the artists’ visual memory, or, in Wordsworth’s words, “that inward eye/Which is the bliss of solitude.”  While watercolor is the perfect medium for recording color effects and spontaneity, it is not forgiving; it is inherently not amenable to correction or  adjustment, demanding decisiveness, experience and a vision or, in Sondag;’s case, an interpretive “emotion [to be] recollected in tranquillity.”

San Franciscans—especially of the wanderer-lonely-as-a-cloud tribe—are likely to have a strong affinity for Sondag’s evocative pictorial tone poems of our beloved peninsular paradise, which capture meteorology and mood more completely than any of the artist’s snapshots must manage to do. The camera never lies, but it’s only a machine. Sondag’s atmospheric paintings of sky overarching the domestic landscape may remind you of Turner (Sea Cliff V and VI,  Lake Street District 16th Avenue, Presidio Drive ), and her architectural renderings may suggest Hopper (West Clay, Anza Trail I) as an antecedent or ancestor, but these art-historical resonances attest to a shared sensibility that finds visual analogues for feeling available to the attentive, transparent, Emersonian eyeball.—DeWitt Cheng 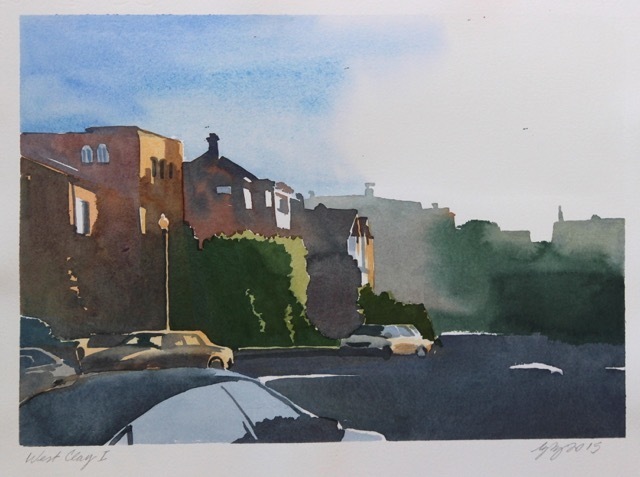