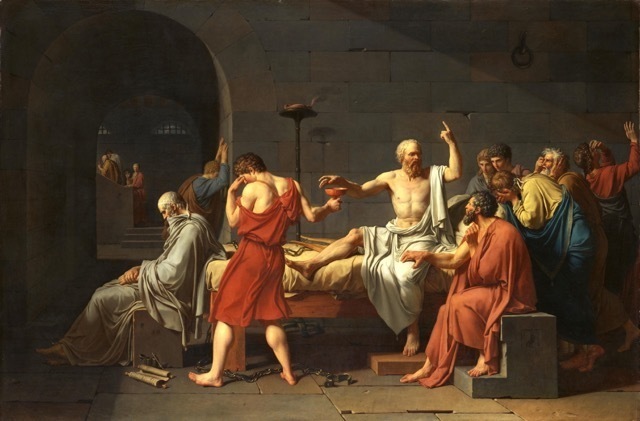 Amid the malarkey and malevolence emanating from Washington, and spreading across the country—Trump a better president than Lincoln, Republicans?!?—and the seemingly endless chain of climate change disasters around the world, it’s difficult to focus on matters of less urgency. Artists, who generally require a modicum of security and calm, may be having a rough go of it—although many artists have accepted the challenge of Trumpism instead of bewailing it, and re-engaged with society, defying the intellectual solipsism of recent years when, as the Beatles put it fifty years ago, nothing was real, and there was nothing to get hung about. (Tell the Iraqis.)

Peter Schjeldahl, in his review in The New Yorker of a current show about war, disparages Jean Baudrillard’s essays which seem to assert that the Iraq War never happened; the philosopher was making a point about media spectacle and fake news, but the fact is that many on the academic left were distracted by the glittering baubles of terminology and jargon from the harsher realities nominally in question.

I recently read I. F. Stone’s The Trial of Socrates (1979), which rebuts the notion (proffered by generations of Platonists, abetted by Jacques-Louis David’s nobly iconic painting), that Socrates was the noblest of the Greeks, a kind of humanist prefiguration of Christ; and that he was crucified (in effect) in 299BC by the demos (people, republic) of Athens—for being too virtuous, too much of a gadfly? Stone was a leftist muckraker of some renown in the 60s and 70s, the publisher of an influential weekly newsletter, and his opinions are consequently not those of today’s self-righteous, ignorant firebrands of the left and right, lost in the cloud-cuckooland of cool new ideas (Nietzsche’s eternal return, again?) or sunk in the mire of unquestioned dogma about messiah, manichaeist FInal Battles, and the Republican utopia of invisible hands (at the public till, or, God Helps Those Who Help Themselves). The GOP shibboleth of plucky independence is nicely illustrated in the painting, “Teach a Man to Fish,” by the conservative Christian artist John McNaughton; in it, the blue-suited Trump instructs a young student who has abandoned his Socialism textbook: no more miracles required—if only you believe in the fish or Fish (an early secret symbol for the subversive martyr), or the 1%er fishers of men.

In a New York Times interview. Stone summarized his argument, based on extensive research with original sources, for which he learned Greek. The accounts that survive, by Socrates and Xenophon, two of Socrates’ disciples, are partial and biased. Today we believe that the charges of not respecting the gods and corrupting the youth are fundamentally conservative-lifestyle attacks on a liberal philosopher and precursor of our wonderful selves; in fact, they are political charges made by the Athenian polity against a teacher who had taught his students to mock and oppose, even to the point of violence, the very idea of democracy.  Two of the wealthy students whom he had instructed in the arts of rhetoric and persuasion were among tyrants who, a decade before Socrates’ trial, had seized power from the rising mercantile ‘middle classes.’

The Thirty Tyrants ruled only about eight months, but it was a time of terror. In that period they executed 1,500 Athenians and banished 5,000, one‐tenth or more of the total population of men, women, children and slaves ... all who were of the democratic party. A few months later, the moderates who had originally supported the Thirty Tyrants began to flee, especially after Critias murdered their leader, Theramenes. He, who had been one of the original Thirty Tyrants, was executed without a trial when he began to criticize the Thirty Tyrants for their brutality... Socrates was neither exiled with the democrats nor forced to flee with the moderate oppositionists. He did not suffer at the hands of the Thirty Tyrants unlike his chief accuser, Anytus, who lost much of his property when he fled and joined the fight to free the city. Socrates, in Plato's “Apology,” calls himself “the gadfly” of Athens, but it seems his sting was not much in evidence when Athens needed it.

Western Civ students may remember that Plato’s Republic with its men of various metals, its Guardians, and its philosopher kings, is not egalitarian, and Greek culture was already strongly predisposed toward Homer’s warrior aristocracy. Odyseeus, chastising the ignoble, deformed, antiwar commoner Thersites, in Iliad: “It is not good for the many to rule. Let one man rule, one man be king.” It is understandable, then, that Socrates was considered a traitor in such dangerous times. In addition, he feared old age, and at age seventy may have been committing suicide memorably by public trial. It is also understandable that the aristos of later times should exalt the virtues of their philosopher kings against claims of the dark and dirty (and dangerous) peasantry.

Plus ça change, you say? The cycle of anarchy-democracy-dictatorship was well known by the Founding Fathers, of course, hence their fear of factional partisanship, unprincipled demagogues and foreign entanglements. It’s a democratic republic... if we can keep it. The President’s desk is not named Resolution casually. Happy new year, neo-Spartans!