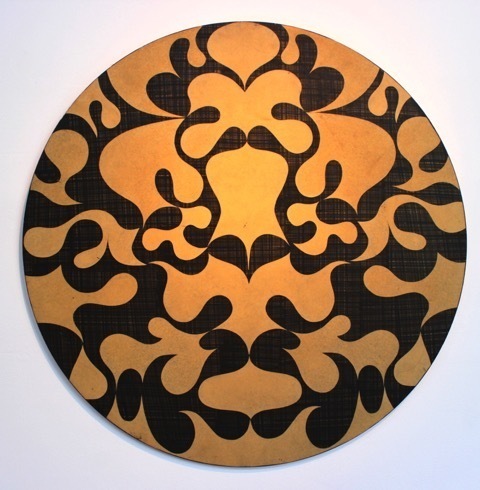 REX RAY: We Are All Made of Light

The death of designer and collagist Rex Ray two years ago at age fifty-eight was a serious blow to the San Francisco art community. A prolific designer or rock-band posters (counting David Bowie and the Rolling Stones among his clients), flyers, T-shirts; supporter of the gay community; and collagist extraordinaire, possessed of seemingly infinite creativity and craftsmanship, Ray, with that wonderful alliterative nom de plume, was something of a one-man movement. He once declared himself “too feral for a real job” and symbolized for many, with his anomalous career the old freewheeling, bohemian San Francisco, now fading into legend. Fortunately, a great deal of his universally admired work survives. SFMOMA, which owns some forty works by him, just installed a small show, pairing his work with Paul Klee’s (a curatorial match that grates with us purists, but we magnanimously put that aside, yes, we do).

A larger show, We Are All Made of Light, comprising some thirty works on canvas and paper, along with some archival prints, with one wall-filling work, “Wall of Sound” (1995-2000) comprised of five hundred page-sized individual collages—fills Gallery 16, a few blocks south of the museum. It’s an age of supposed democratization in the art world, where everyone is an artist (or at least everyone who pays art-school tuition), but some of us are clearly more equal than others. Gallery owner Griff Williams praised Ray as “the hardest-working artist I’ve ever met,” and the combination of dedication and talent shines from every work, from the large floral canvases, “Rosathoria,” “Lichina,” and “Clavaria,” with their stylistic hints of Aubrey Beardsley and Friedensriech Hundertwasser—and Spiro-Graph and Spin Art; to “RR 19” and ”Isidia,” baroque-hallucinatory Rorschach tests; to the psychedelic mandala of “Phaedoarubas,” which suggests the drug experience, as Fred Tomaselli’s collages do, but without the actual contraband: just painted, cut paper, exquisitely arranged and assembled. I could go on—“No. 2920,” “No. 3271,” “No. 3444,” “RR 145, ....  If people emit iight, through bio photons, as scientists postulate, artworks radiate, too.—DeWitt Cheng 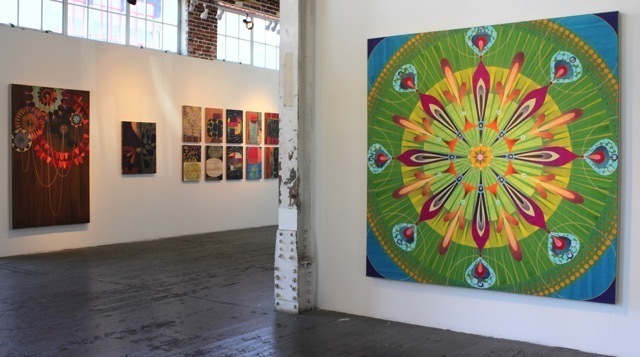 If “he who dies with the best resume” is true, then Rex Ray has already won, and he’s only 51. The San Francisco designer has created a host of distinctive products for major corporate clients; he’s also a fine artist blessed with an enthusiastic fan base, gallery and museum shows around the world, and an upcoming coffee-table book. “Whether we like it or not, we live in a Rex Ray world,” wrote art critic David Bonetti in 1992. Considering the designer’s ubiquitous posters, note cards, rugs, T-shirts, and gourmet chocolates; and the artist’s plethora of collages, digital prints, and paintings on panel and canvas, that sounds like an understatement: it’s his galaxy.

Born in Germany to a military family, Michael Patterson took an early interest in art and design, which developed later in college in Colorado; he adopted his memorable nom de guerre Rex Ray (derived from 1950s Rexall Drugs appliances) while involved with mail art, in which handles were customary. In 1980 he moved to San Francisco with $50, sleeping on lawns or in his VW and showering at Aquatic Park until his Tower Records job allowed him to rent an apartment. Fired from Tower, he walked uphill to apply to the San Francisco Art Institute, where he received his BFA. Graduate work, though, was problematic: it was the height of the AIDs crisis, friends were dying, and Ray’s monochromatic abstract work found little support at critiques that seemed increasingly irrelevant, so he left school a few units shy of an MFA. Clerking at City Lights Bookstore while learning digital graphic design, he made contacts for book and music design work that brought him attention and acclaim. After starting his own company, he created posters and album/CD covers for The Residents, Santana, Joe Satriani, Diamanda Galás, Iggy Pop, and, most prominently, David Bowie, who has commissioned many works; he once boosted Ray’s credibility at Bill Graham Presents by asking an exec for the poster artist’s autograph.

In 1997, Ray, who’d always considered himself “too feral to hold a real job,” found himself rebelling against the designerly strictures of his corporate success, “needing to do something very simple and relaxing, like knitting-something my hands could do without much thought-but employing a process uniquely my own. I had no agenda other than my own pleasure. So every evening I’d leave work by turning off the phones and computers and start cutting up magazines… I’d tumble my way through references to 20th-century Modernism, nature, the body, Fluxus, Surrealism, hard-edged abstraction, kitsch patterns, popular culture of the ’60s and ’70s, building a theme park of aesthetic liberation.”

The hundreds of collages on watercolor paper resulting from those quiet evenings have been joined by work in other media: medium-sized resin-covered collages on wood panel; archival digital prints; and large, kaleidoscopic, botanically themed collages on canvas- the tropics on psychotropics. Hand-painted paper and digitally printed patterns supplant the magazine cutouts in these larger works, but the exuberant playfulness and virtuoso execution remain: the swooningly graceful curve of one piece is picked up effortlessly in another, and figure and space dance a spirited minuet. Ray plays both trompe l’oeil and trompe l’esprit: the eye sees colors overlapping and creates space, and the mind creates metaphors from his exquisitely wrought ambiguities: eye and mind are fooled, and they adore it. While the blobby pseudopod shapes may draw inspiration from late Surrealism, the unmodeled color areas from Abstraction Expressionism, and the bright sensibility from Pop and the Pattern & Decoration movement, ultimately, these irresistibly witty abstractions seem, above all, formed and informed by the pleasure principle. 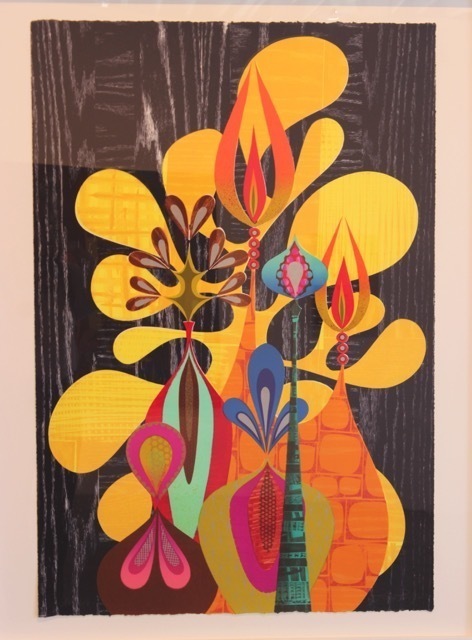 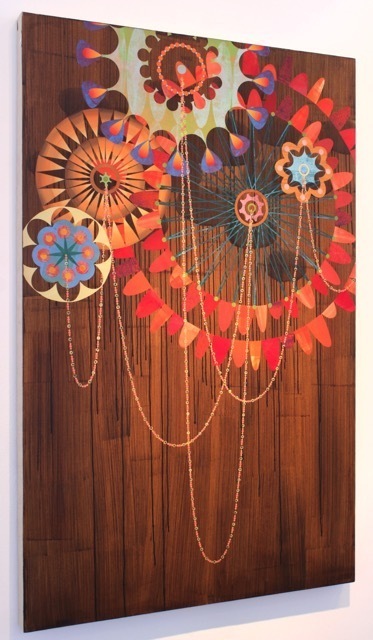