« Back to blog
Ricardo Mazal
Elins Eagles-Smith Gallery, San Francisco, California
Recommendation by DeWitt Cheng
Continuing through August 12, 2017
Ricardo Mazal, a Mexican painter now living in New York and Santa Fe, might be said to absorb the contradictory impulses of his environs: monochrome abstraction and a feeling for landscape. He combines photographic studies of sites that he has visited, many of them endowed with spiritual meaning, brought together through his love of the painting process and its materials. The spiritual element, given relatively little attention in the hurly-burly art world, lay at the center of Mazal’s 2013 show, "The Kora Dialogues." That show featured paintings inspired by the artist’s kora, or circumambulation, of Tibet’s sacred Mount Kailash, in the summer of 2009 (which included witnessing a rare traditional sky burial, in which the body of the deceased is ritually cut up and fed to scavengers).
Current works include oil on linen or oil on aluminum dibond paintings, which are rectangles of a single color or abutted rectangles of different single colors, reading as landscape and sky, all inflected with seismographic-looking ‘drawing’ made by applying and scraping paint with long foam-rubber blades scored at irregular intervals. If the method suggests Gerhard Richter’s high-key squeegee apocalypses, Mazal’s paintings, which suggest the strata exposed by land cuts are more subdued, suggesting a meditative calm and underlying the geologic formations and deformations.
These paintings are pure abstractions made graphically powerful with their swirling black and white ribbons and banners. The artist metaphorically examines the geology of high mountains. Inspired by high-contrast photographs of the escarpments, and directed to excellent spiritual ends, Mazal deploys painterly sedimentation to suggest the forces of mountain-building in layers of red, violet, blue, gray and white oil paint. 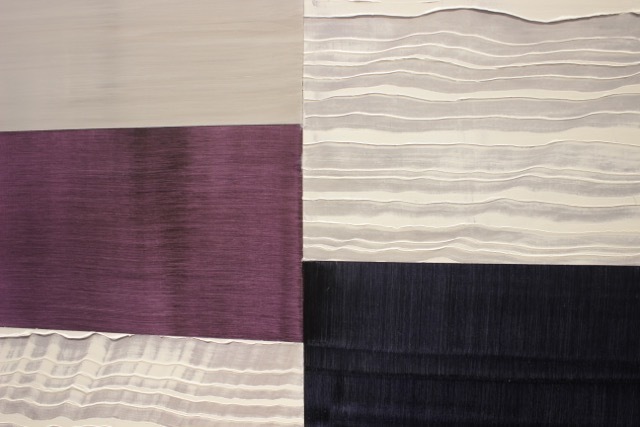