« Back to blog
Rich Silverstein: I Read the News Today Oh Boy
Minnesota Street Project, San Francisco
What did you do during the pandemic? This is what I did. —Rich Silverstein 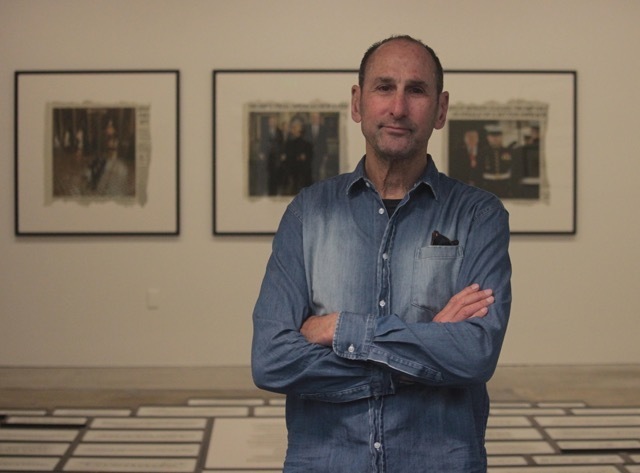 Aside from Ward Schumacher’s political word paintings at Jack Fischer Gallery, and some low-profile shows at nonprofit spaces, the Bay Area, famed (and disparaged) for its liberal “San Francisco Values,” has mostly failed to address the Trump Follies. It’s a sleepy town in some ways. Rich SIlverstein’s recently concluded show at Minnesota Street Projects, I Read the News Today Oh Boy, came as a pleasant surprise, then, when I ran across it unawares in July. If that title rings a bell, it’s from the Beatles’ epic collage/montage, “A Day in the LIfe,” from the Sergeant Pepper album; in its range of references and associations, it’s a psychedelic updating of T.S. Eliot’s “The Waste Land,” an elegy to tragicomic contemporary life.
If the name of the artist also rings a bell, Silverstein is an award-winning ad executive who went at art school at Parsons and during his career served as art director of the countercultural San Francisco rock publication of record, Rolling Stone. Silverstein was not heretofore known as a fine artist (although he did a series on the Dubya administration, which was published online). He was inspired by the first Trump impeachment to create a large series of photographic collages, nondigital, it should be noted, of New York Times banner headlines that captured not only the events of the day, but the tenor of the times (no pun intended). The dispassionate, objective sentences, the typography, the off-white newsprint color, and the torn, deckled edges of each quote, individually enlarged and framed in black, like an obituary notice, become blunt, striking metonyms and metaphors for our long worse-than-Nixonian national nightmare. 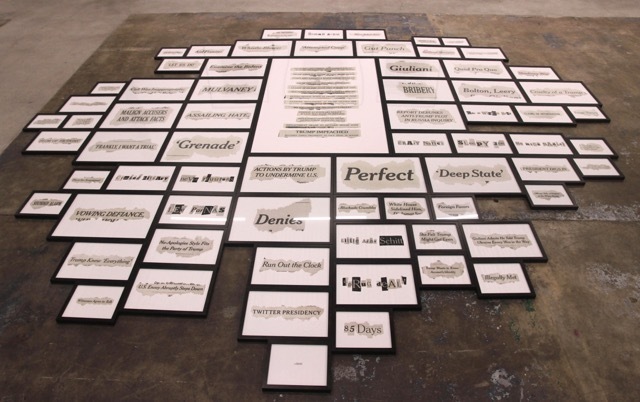 85 Days, a sprawling installation of these excerpts, displayed salon-style on the gallery floor, covers the process of the first impeachment, beginning on November 25, 2019, and ending with 45’s supposed complete exoneration. The pieces are nonsequenced, so they can be arranged in any order; the random element suggests the collage-and-chance techniques of Dadaist collages and William Burroughs’ cut-up writing process  (which, incidentally, influenced Lennon and Macartney). Twitter Presidency, Gut Punch, Crazy Nancy, Sleepy Joe, Little Adam Schitt, No-Nads Nadler, Human Scum, I Would Like you To Do Us a Favor—a whole disgraceful era is encapsulated in a few pithy, pissy phrases. What’s in a few ill-considered words? 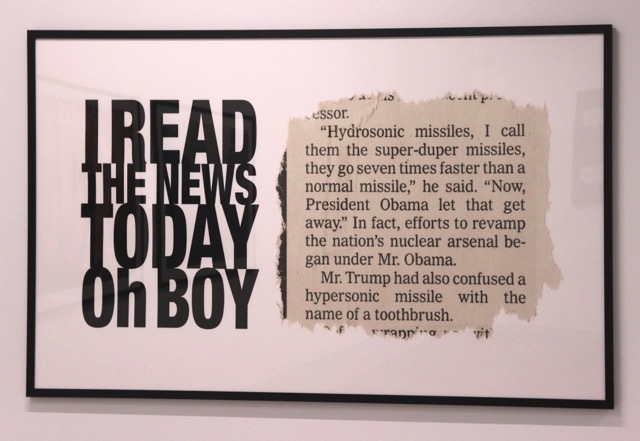 After the impeachment, SIlverstein continued creating larger-scale headline pieces as well as blowups of historically significant photographs, covering the 2020 election, the stop-the-steal warning signals from December, and the January insurrection. I Read the News Today Oh Boy, for example, mordantly juxtaposes the Beatles’ mundane record of facts (“Woke up, fell out of bed. Dragged a comb across my head.”) with the Commander-in-Chief’s blithe incomprehension of the facts of nuclear weaponry (“super-duper missiles”).

Several untitled photographic diptychs—single photos individually framed but displayed together— achieve their effect by contrasting political ideality (what we expect) and reality (what we accept). In one diptych, we see the Trumps about to step into Marine One, dressed as the affluent Manhattanites they used to be; at right, in contrast,we see the covid-masked, post-Inauguration  Bidens embrace in the cold at the White House front door, which,despite the color guard flanking the First Couple, seems to have been unaccountably left locked.

In a second diptych, we see armored, helmeted SWAT teams at a Portland or Minneapolis BLM protest, backed up by an ominous LRAD (Long Range Acoustic Device) sonic cannon for additional crowd control and dominating the battlefield; on the right, Officer Eugene Freeman, of the Capitol Police, covid-masked, leads the January 6 insurrectionists away from their intended targets in a cell-phone shot taken by someone in the mob—and undoubtedly immediately posted to Twitter.

In a third diptych, we see, on the left, John Trumbull’s 1818 painting of the signing of the Declaration of Independence, for which he assiduously tracked down, over two decades, 36 of the 47 signatories,whom he painted from life; on the right, Trump exults in his escape from impeachment before an eager, jubilant White House audience of Republican allies. 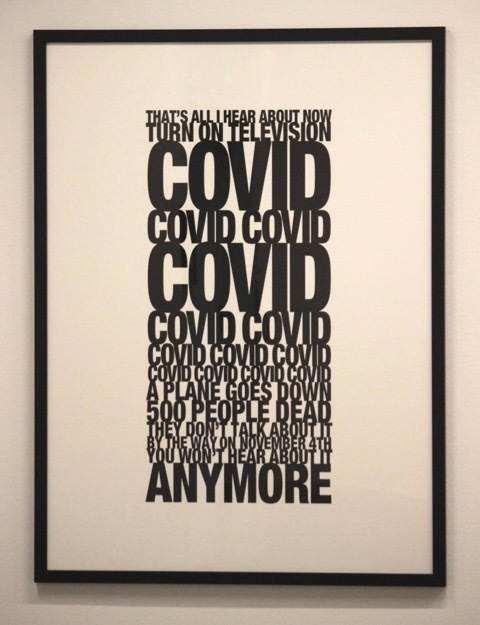 In a brief interview at the gallery, Silverstein expressed hope that the show might someday be presented at—where else?—The New York Time offices. While that would certainly be fitting and poetically right, there is a better venue…. which, unfortunately, does not yet exist. In American Visions: A History Art in America, Robert Hughes describes the plight of JohnTrumbull, the artist obsessed with depicting the American revolution. By the 1820s, America no longer cared about its history, hits energies devoted to the economic development of the continent—and at the nominal spreading of civilization and liberty. John Adams, who disapproved of art as frivolous, took a pessimistic view of Trumbull’s patriotic enterprise:
I see no disposition to celebrate or remember or even Curiosity to enquire into the Characters Actions or Events of the Revolution, I am therefore more inclined to despair, than to hope for your success in Congress.
Adams was wrong, however, and Trumbull was commissioned by Congress to do four paintings, which were installed in the Capitol Rotunda in 1826, the same year that Adams and Jefferson died (both famously on July 4, fifty years after the signing of the Declaration). Ironically and shamefully, they became mute witnesses to 2021’s barbarian invasion.
The historical amnesia of American culture is now at a level probably undreamed of by the Founding Fathers—although a debased version of it, in the form of white supremacy, is defended nowadays as if divinely ordained. America needs an independent museum of political art that could present work such as Silverstein’s—as well as the toppled statues of Confederate generals, and cartoons and videos by our wittiest, smartest commentators—in a historically thoughtful context; it needs a People’s Museum of History dedicated to the truth, the whole truth, and nothing but the truth: warts and all, all the news that’s fit to print and illustrate. Whether the people and their representatives, or some of the billionaires with money currently burning holes in their pockets have the honesty and intellectual courage to face our national inconvenient truths and save the great experiment of self-rule remains to be seen. 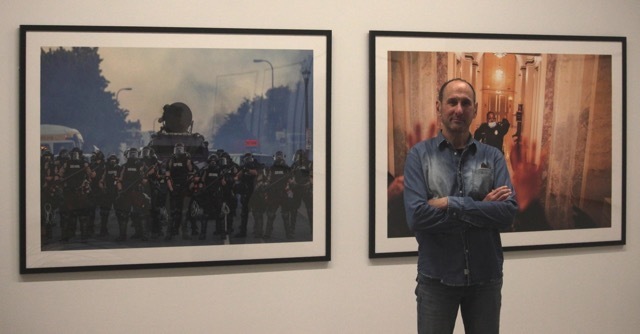