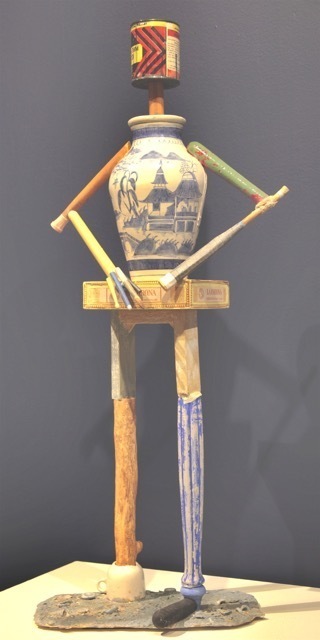 The popularity of new media and conceptual art, as well as American’s obsession with the new, in every sphere, including the arts, tends to obscure the work of artists working in traditional media, as well as the very notion of lifelong commitment to one medium. Ceramics, of course, has been accorded the full status of an art material only in the past half-century, largely as a result of doggedly individualistic Bay Area artists like Robert Arneson, Clayton Bailey, Stephen DeStaebler, Viola Frey, and Peter Voulkos, who infused wit, subversive humor, pathos and delight into that ancient and earthy (therefore humble) medium, with its tactile, shape-shifting expressiveness, suited to both Abstract Expressionist gesture and polished, geometric perfection—and its traditional Christian connection with the human body.

Two of the Bay Area’s undisputed masters of art ceramics are united in a show at Sonoma Valley Museum of Art (until April 7). The show originated at the gallery in Santa Clara University’s Edward Dowd Art and Art History Building Art, initiated by by SCU ceramicist and Gallery Manager Pancho Jimènez, and curated by San Francisco State University Art Professor Mark Dean Johnson and SVMA Executive Director Linda Keaton. The show, untitled but for the artists’ names, is modestly-sized, with only about a dozen works by each artist, but it’s large in spirit and ambition: vigorous, assertive and pointedly funny, when so much contemporary art looks forced and voulu, willed and affectless, and overly reliant on being oh-so subversive, but only that. The works of Shan and Zhang score some sociopolitical points, but with beauty and wit.

Shaw and Zhang, friends and colleagues from different generations (born in 1941 and 1961, respectively), are deeply personal artists who, along with being invested in clay, are interested in cultural critique of a personal sort. Shaw’s trompe-l’oeil assemblages of faux oddments, sometimes conjoined into humanoid figures, play with the conventions of mimesis and traditional realism, but in the playful mode of the Mannerist painter Giuseppe Arcimboldo, who contrived portraits made of fishes, book, and fire; and in the melancholy mode of the Metaphysical painter, Giorgio di Chirico, whose mute mannequins reflected the modernist disbelief in classical heroes—though not without nostalgia; they’re junk-pile ruins that are analogous to T.S. Eliot’s verbal collage in “The Waste Land.” Mark Dean Johnson in his informative and readable catalog essay also cites those usual suspects, the trompe-l’oeil American painters, Peto and Harnett, as well as the virtuosic decorative porcelains of the Frenchman Bernard Palissy in the sixteenth century. (To digress slightly, Chris Anteman’s 2017 Forbidden Fruit show at the Crocker Art Museum was inspired by the eighteenth-century German, Johann Joachim Kändler). Zhang, who emigrated to the US from China in 1992, and soon made his mark with life-six=zed ceramic figures akin to the Xi’an warriors guarding the tomb of the First Emperor, but done in a, expressive, loose style that to my eye melds Rodin and Bay Area Figuration; there are also sly notes of satire and humor in the anachronistic modern accessories—boom boxes, shades, skateboards— that these stolid, stoic, heavy, timeworn warriors bear with such fortitude and resolve. Johnson also points out that the two artists share a biculturalism that disproves Kipling’s old adage that East and West never meet: Zhang uses the formidable academic sculpture skills that he honed at LuXun Academy of Fine Arts, but he modifies it with the free, intuitive expressionism that he absorbed in the Bay Area; Shaw’s still-life assemblages draw on the history of Chinese porcelain, which he imitates in his parodies/homages, with seeming effortlessness.

Among the outstanding pieces of this very strong show I have space for only a few. Shaw’s 2014 “Canton Lady” is a composite figure composed of a paint-can head (labeled “100% Pure Paint”), paintbrush fingers, a cigar-box hips, baseball-bat limbs, and a blue-and-white ‘Cantonware” vase for a torso, all made in clay and colored with decals or hand-painting; his 2012  “House of Cards with Pearlware House and Fence Motif,” a seemingly precariously balanced arrangement of objects anchored by a heavy textbook (Psychoanalysis in Modern Art) atop which are stacked an inverted Ming-style teapot, another book, and then a pyramid of playing cards. Zhang’s 2008 “Untitled Warrior,” a life-sized columnar figure of daunting power and weight, protected by jade-plate armor—and a white-snouted respirator mask of the sort that Bay Areans used for protection in last year’s wildfires (or goggled, equine-looking Great War soldiers, against mustard gas); his 2018 “Shifting Mountain” is a similar courtly figure, this one bearing wrapped gifts, but surmounted by a tower-like encrustation of rock akin to the intricately eroded scholar stones collected by Chinese connoisseurs for centuries; his 2013 “Fish Dinner Box” replicates a takeout Chinese-food container, replete with faux grease stains and the injunctions,  “Microwave Safe ... Enjoy... Call Again.” 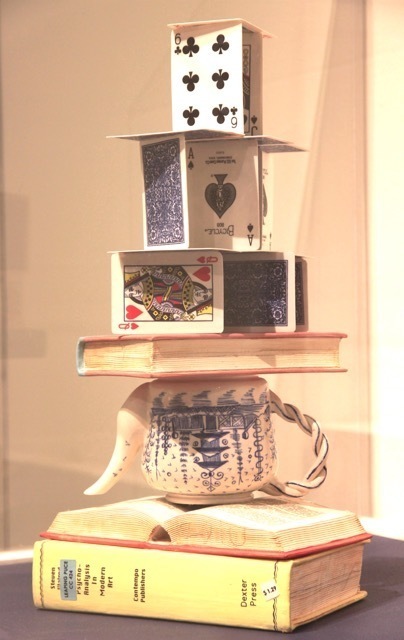 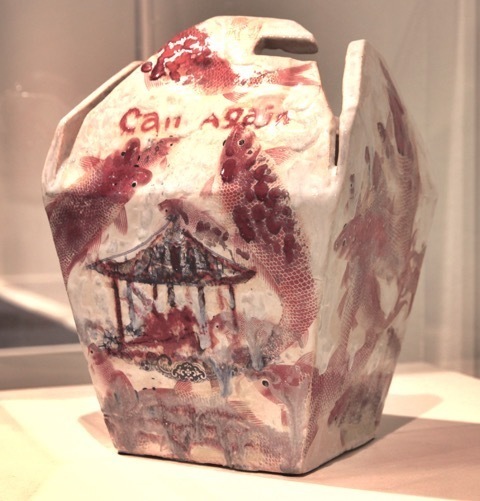