The landscape paintings of Jenny ML Wantuch are quiet evocations of place that derive from Impressionism, Fauvism and Abstract Expressionism. Her work continues the Bay Area Figurative tradition, which synthesized traditional subject matter—figures, landscapes, still life’‑—with painterly impulse and improvisation. In addition, her paintings lack of the self-conscious irony that characterizes so much contemporary art; possibly the isolation imposed on us by the pandemic will lead to a new appreciation for seriousness and sincerity, too long out of fashion for some.

Wantuch grew up in rural Sweden, and worked in California as an environmental engineer before deciding to pursue her longtime love of art. She has thus has a deep appreciation of nature. She takes hikes and paints both small works on panel on location, and larger works, later, in the studio. The twenty-two paintings that comprise “Sound of Water” (named after the largest work in the show) depict northern California, primarily, with the exception of a pair of casein paintings—in the tall, vertical format of Japanese scroll paintings—depicting Monet’s Garden at Giverny, the result of a 2019 pilgrimage to that living shrine after Wantuch saw the San Francisco retrospective of the Impressionist’s work at the de Young Museum. The vertical format, a departure from Monet’s panoramic “Water Lilies,” was a compositional challenge to which she rose. The two paintings, which can be appreciated either together, as a diptych, or as separate works, depict a waterscape of lily pads, willow leaves, rushes, and a reflected blue sky dappled by clouds: the floating natural paradise. 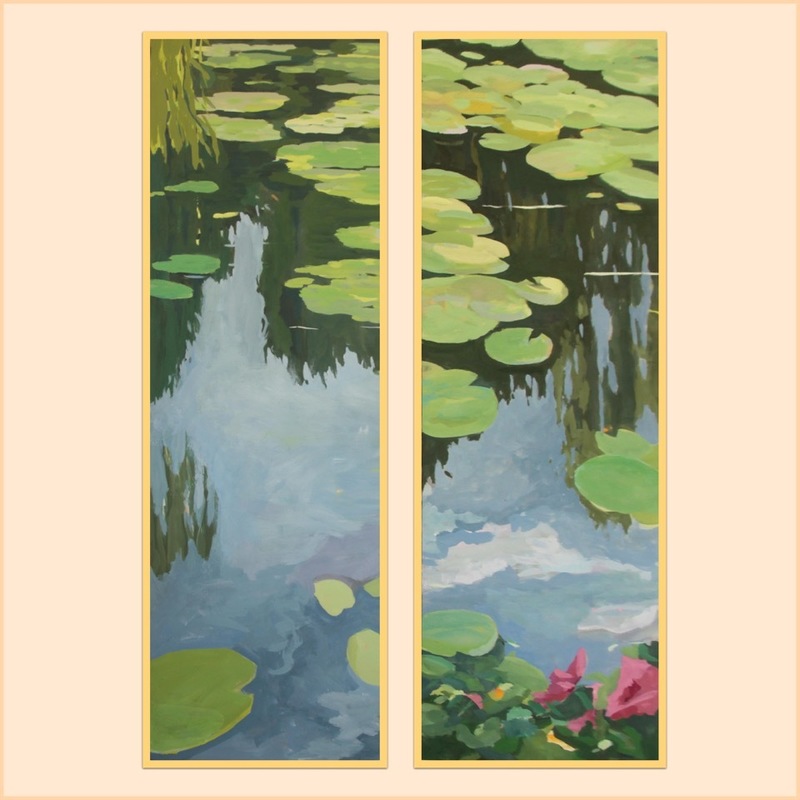 Wantuch employs the Asian scroll format on her oil-on-panel and casein-on-clayboard depictions of scenes closer to home, as well. “Pond Reflections,” another double painting, is similar in its motifs, but more spatially complex, with its overlapping foliage; and more visually dynamic, with its profusion of verdure. The single paintings, “Pine Tree” and “Weeping Willow,” (no photo) and “Red Blooms” depict slices of nature, usually so unruly, transformed by an organizing intelligence. “Nocturnal,” with its single white flower glowing in the dusk, points up Wantuch’s increasing interest in the psychological or symbolic aspect of the landscape, sometimes empty, and sometimes populated by figures imported from life-drawing sessions, a separate body of work until now. 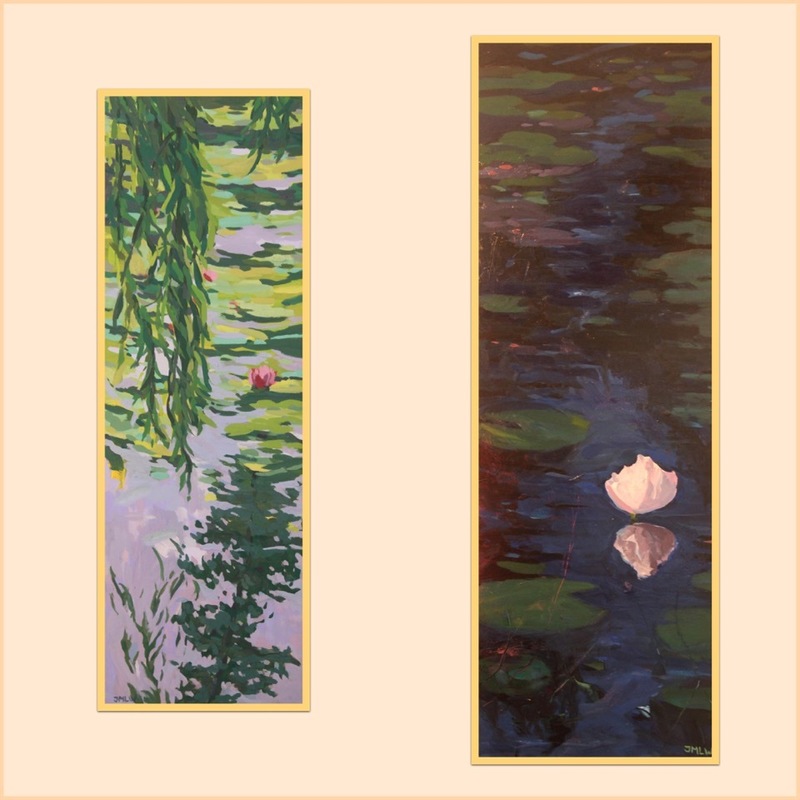 The self-enforced isolation imposed on everyone nowadays has affected Wantuch’s practice. The colorful evocations of the natural landscape in daylight that she is known for are represented here by two Lake Tahoe paintings, as well as “Silver Sage (Tahoe)” and “Trinity River.”  But these cheering views of the unspoiled natural world are joined by more introspective works, infused with the concerns of the moment: sunny Impressionism darkening slightly into crepuscular or nocturnal Symbolism, perhaps.

Wantuch has always been interested in capturing the emotion of a posing model, or at least the implicit emotion; now she employs the observational skills of an artist and a scientist to reflect the cultural, historical and environmental moment. In an e-mail, she wrote: “Munch is one of my favorite painters. His authenticity and the difficult emotions that he expressed so well inspire me to be more open, honest and bold. ... [T]here is a melancholy that I empathize with and I think part of it comes from growing up in Sweden (or Norway, in Munch’s case); long, dark winters do that to you.” 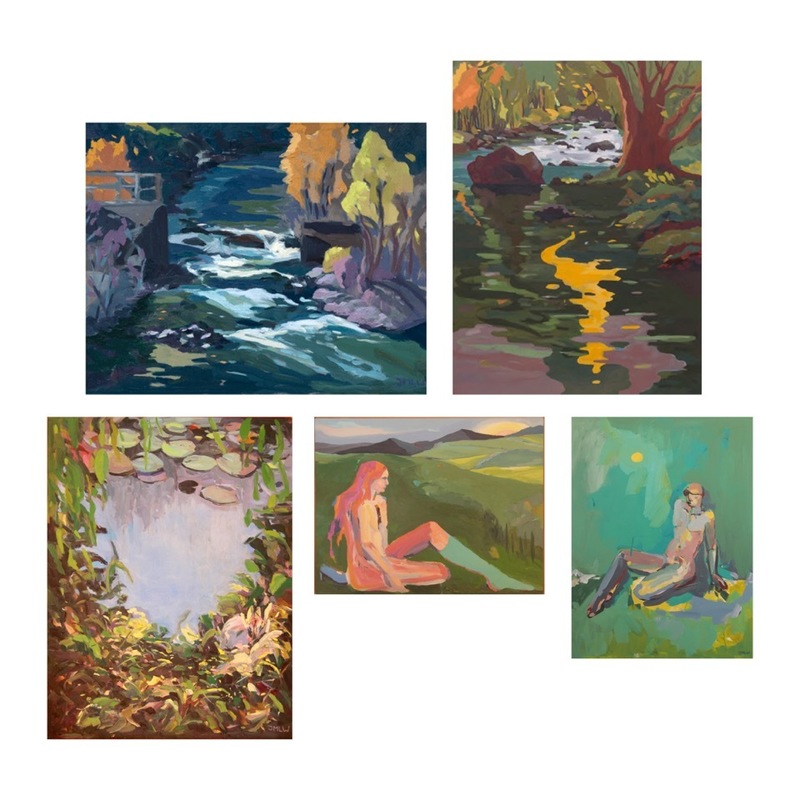 If Wantuch’s humanized nature imagery is not quite Edvard Munch’s anguished scream passing throughout Nature, the inward mood of some recent paintings seems to agree with our current feelings of uncertainty. “Last Light, Trinity River” depicts the “final fleeting moment” before a “small sliver of light” is swallowed up by encroaching night. The golden ripple on the water in the eponymic “Sound of Water” might similarly denote the transience of the world as we know it—and even of our exceptional, American selves; while the framed or wreath-circled void in “Weeping Willow” rearranges the motifs of the Monet-inspired diptychs to suggest baroque gilded frames delineating a void: emptiness or potentiality? Wantuch notes that she was thinking of Zen Buddhism’s “balance of dark and light, yin and yang. I think it is a kind of escape or rest.”

The longing for a return to normalcy appears in several paintings of figures in the landscape, which, a motif in the existentially inflected Bay Area Figuration of Diebenkorn, Oliveira, Park and Bischoff. “Solstice Dream,” inspired by the artist’s memories of enjoying long summer days above the Arctic Circle, depicts a long-haired nude, almost an allegorical emanation of the sunny meadow in which she luxuriates. “A Moment in the Sun” depicts another nude in nature, caught between, “lethargy and lonely emptiness” and “longing for freedom and connection.”

An art-historical anecdote comes to mind. Georges Rouault and Henri Matisse, his onetime student, were once asked if artists required an audience. Rouault, the religious expressionist, said he would do what he was doing out of internal necessity, or compulsion, even in nobody ever saw his work. Matisse, the creator of pictorial beauty—of restful, refreshing armchairs for tired businessmen—said an artist must be able to share his vision. Wantuch’s landscapes share both Rouault’s determined work ethic and Matisse’s generous grace. — DeWitt Cheng