THE END OF THE WORLD

If you are like me (and we do share hominid DNA), you have been spending the last few months doing all you can to oppose our mad king and his suicidal minions while fighting off nagging doubts, mine probably amped up by too much YouTube time with Epic History and The Fall of Civilizations.

What if Trump, the cruel, venal Biff Tannen (based on Trump, as everyone must by now know), endowed with federal superpowers, and aided by the bullet-headed thugs of his Republican Guard or SA, wins re-election? What if we cannot find solutions for the pandemic, for economic decline, and for global climate catastrophe?

The end of the world (as we know it) is a trope of science fiction movies, and the post-apocalyptic era is a kind of survivalist fantasy world of Wild West anarchy with mighty-man warlords. It is of course also the story of much of human history, once you remove the trappings of state and the regalia of royalty and religion. Shakespeare’s history plays bedeck royalist gangsterism in ineffable verse.  Coppola’s Godfather trilogy depicts ruthless organized crime as business sans the usual hypocrisy, and a potential pathway to ‘legitimate’ power. Vito tells his son, now following in his footsteps: “I don't apologize - that's my life - but I thought that, that when it was your time, that you would be the one to hold the string. Senator Corleone; Governor Corleone.” All bow to President Corleone.

Western civilization represents at least in name an advance from the barbarism to which e seem to be succumbing. It is trendy these days to disparage Enlightenment liberalism as an ideological figleaf for capitalism, colonialism and exploitation; it has been those things, but at its best represents, as it did for Lincoln, the last best hope for mankind. Can America gets its mind right, and live up to its stated ideals, or do we cede the planet, with supine ‘realism,’ to nakedly authoritarian rival regimes?

We are currently in a great transition. The digital global economy is wreaking havoc on traditional norms, awakening dark forces—“dark shadows” in the words of our oracular maximum leader. A book from my freshman Western Civ class in college comes to mind: Norman Cohn’s The Pursuit of the Millennium examined how the social chaos wreaked upon feudal society by the incipient industrialization of Western Europe created the context for radical millennialist movements who believed the end of the world imminent in the year 1500. These groups rampaged across Europe, goaded by charismatic prophets, who assured them of inevitable success in establishing a true holy kingdom, no matter how many priests had to be beaten or beheaded.  It’s a rollicking tale, nicely encapsulated in a few antinomian (i.e, above the law) chapter headings: The Saints Against the Hosts of Antichrist; An Elite of Self-Immolating Redeemers; An Elite of Amoral Supermen. Clearly we are in a similar moment of crisis. Perhaps Q, the Deep Throat of QAnon, knows the story’s conclusion, even if his warrior-citizens do not: how church and state put aside their usual bickering and united, the mailed fist within the velvet glove, to burn the heretics and suppress their impious, populist aspirations. (Perhaps Q is an agent provocateur, covertly keeping the populists busily gnawing harmless chew toys in concert with the disinfotainment specialists at St. Petersberg’s Internet Research Agency...)

The Judaeo-Christian tradition’s eschatological concept of linear time ending with the return of an angry/rewarding God, however loony in real life, has paradoxically inspired great works of art; but do Bosch’s sublimely weird visions balance the suffering inflicted by the “christianizing and civilizing”(William McKinley) conquerors outfitted and enriched by the artist’s pious collectors? The Founding Fathers of the United States, heir to both Christian belief and Enlightenment thought, tried (imperfectly, as everyone now knows) to balance the better aspects of both, while turning a blind eye to their dark side:  the slavery and genocide necessary to Manifest Destiny, to Making America Great.

But you have to wonder how much that supposedly necessary hypocrisy cost the leadership in psychic terms. The historical examples of fallen empires were often in their thoughts, and some of the painting of the era depicts those fears, while attempting to discharge or displace their energy into the safely remote past—object lessons for New World’s Best & Brightest. JMW Turner’s paintings of doomed civilizations and Hubert Robert’s paintings and Piranesi’s paintings and etchings of Roman ruins and imaginary prisons testify to a fascination with decline and decay that some now (where did Happy Talk go?) would deem morbid, while others would accept them as the inconvenient truths of philosophical realism.

Several years ago I read David Foss Bjelajac’s study of Washington Allston’s painting “The Feast of Belshazzar.” Its subject is the biblical account of the hand of God delivering a fiery written warning to the Babylonians that their glorious empire would fall (as it did, in 539BCE): Mene mene tekel upharsin. Rembrandt had painted it earlier, dramatically, and the Romantic John Martin showed his contemporaneous version in England to great success; but for Allston, just after the Revolution, it was a pictorial reminder that the new republic—the new Israel, not the new Rome—would have to be godly, so the painting has a rather stentorian, moralistic feel. Allston, who worked on the painting from 1817 to 1843, was planning to work on the obstinate Babylonian king on the day he died. Maybe America’s royals can learn from the writing on the walls of Portland and Kenosha before our money-centered, death-dealing empire/world is given to the new Medes and Persians, whoever or whatever they turn out to be. 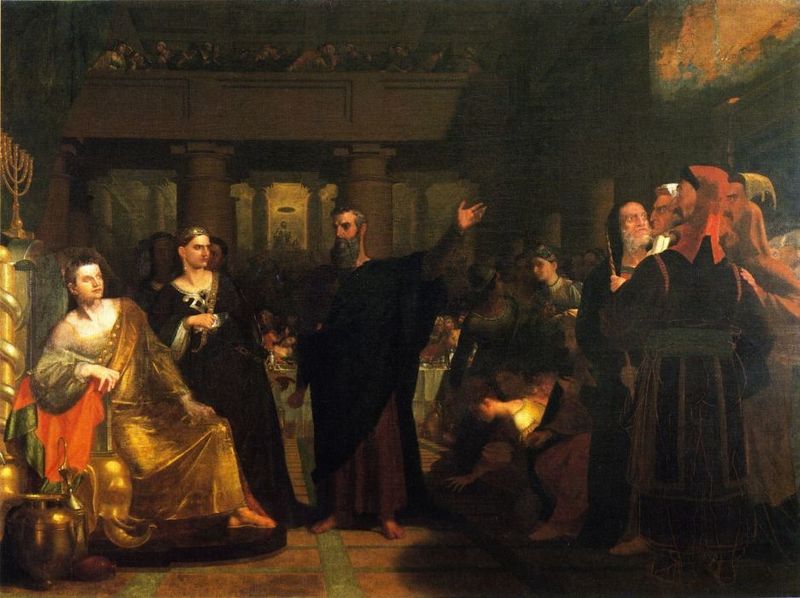