VESTIGES:The Beauty of the Fragment

“The people have a poetic sense in themselves. They are the men who invented that ceaselessly renewed verbal poetry— slang. These men are endowed with a constantly creative imagination. “They transpose reality.” What then do modern poets, artists, and painters do? They do the same thing. Our pictures are our slang; we transpose objects, forms, and colors.
Fernand Léger, ”The Human Body Considered As An Object” (1945)
Each period has its peculiar image of man. It appears in its poems and novels, music, philosophy, plays and dances; and it appears in its painting and sculpture. Whenever a new period Is conceived in the womb of the preceding, a new image of man pushes towards the surface and finally breaks through to find its artists and philosophers.
Paul Tillich, ”Each Period Has Its Peculiar Image Of Man” (1959)

In 1959, as Abstract Expressionism was in full sway in New York, the art historian and curator Peter Selz curated an exhibition, New Images of Man, at the Museum of Modern Art that focused, in contrarian fashion, on the figure, then an aesthetic taboo. The exhibition catalogue featured Tillich’s article, cited above, and could easily have included Léger’s, advocating for a humanistic figurative art that might be understood and embraced by the common man—the average blue-aproned Parisian ouvrier whom he celebrated and monumentalized. Selz reprised his 1959 show fifty years later, in Berkeley, in 2009, at the Alphonse Berber Gallery, under the expanded title, New Images of Man and Woman.

Contrary to postmodernist practice, with its appropriation of mass-media imagery for deconstruction and sociopolitical critique, in their current show, Vestiges, Smith and Woods have chosen to deal with the intimately personal—with family life and the female body, respectively—as their royal road to the universal. In this they align with Selz, Tillich and Léger, employing modernist visual style to explore the unchanging human condition.

The photographer Josh Smith and the photographer and collagist Vanessa Woods met in art school in 2004, and have worked together and separately since then, pursuing complementary approaches to art-making in spousal parallel evolution. Artist couples have the advantage of trusted, knowledgeable creative feedback, conveniently located in-house. Given our current cult of individualism, and driven production, we might assume that familial proximity and diminished privacy might inhibit creativity, but Smith and Woods pursue personal, poetic visions while juggling teaching and family responsibilities. For these artists, art arises from the reality of daily life and from romantic solitude in the garret. Woods cites Imogen Cunningham as an inspiration, both for her photographs and for her managerial skills, with “one hand in the dishpan, the other in the darkroom.”

The title of the show, Vestiges, aptly describes the couple’s joint approach, employing fragmented imagery to depict situations, ideas, and emotions impossible to represent in a naturalistic way. Vestiges are remnants, but those pieces excerpted from reality can be reassembled to form new configurations, as the modernists of a century ago discovered: Cubism’s composite glimpses depicted the complexity and simultaneity of modern life a century ago; and, a decade later, the irrational juxtapositions launched the alternate universes of Dadaism and Surrealism.

Josh Smith writes that he focuses on “moments of presence and tension” avoiding dramatic incident, instead looking to embody the “in-between moments of our lives. Readers of Susan Sontag’s On Photography may remember that “in-between moments” was a phrase used by the great Swiss-American photographer Robert Frank to designate what Sontag calls “moment[s] of revealing disequilibrium.” In 2015, I wrote, of Smith’sPlaces You Know series,

...his works ask the viewer to create through imagination the connections between everyday surroundings that are not inherently dramatic, or immediately meaningful—the anti dramatic 1960s New Topographics work of Lewis Baltz and the wry disjunctions of Lee Friedlander come to mind—although Smith’s cropping transforms them into strong abstractions that’ ‘talk’ to each other and to the thoughtful viewer.

But family life has shifted Smith’s gaze from the landscapes of suburbia to domestic interiors and family life, assumed, erroneously, despite many exceptions—Bonnard comes to mind—to be primarily the domain of women artists like, say Mary Cassatt.  Smith takes quick fragmentary shots of his children frozen in ambiguous action, faces omitted, that are compelling and enigmatic. Like the incongruities and surprises associated with street photography, Smith’s images are life caught on the fly by a critical eye. Smith loves both the hunt for images, and the ambiguous narratives that arise after editing and printing, when, as he says, “a photograph suggests meaning but does not divulge it.” Completing the circuit between subjects, artist and viewer is the important thing, not a predetermined meaning or interpretation, although Smith’s evocative studies of family life subvertsively yet quietly challenge the toxic gender-based orthodoxies of American mass culture in 2020.

Vanessa Woods’ collage aesthetic and technique derive from the subversive Dada-Surrealist tradition of a century ago, pioneered by Max Ernst, George Grosz and others. The juxtaposition of unlikely elements to create an irrational world of paradox and enigma became one of Surrealism’s signature devices, nicely expressed in the poetic simile by the Comte de Lautréamont, “as beautiful as the chance meeting on a dissection table of an umbrella and a sewing machine.” In 2016, Woods showed twenty-five collages in a two-person show, Somewhere Between Here and There, at Jack Fischer Gallery, in San Francisco. Woods’ work was shown alongside collages by her friend and mentor, the late Ken Graves, who had recently bequeathed her his archive of cutout materials. At the time, I wrote:

If [Woods’] previous work featured contorted and sculptural bodies (sometimes headless) in isolation, these are placed in a dark, deep, cinematic space. No fewer than sixteen of the works feature standing protagonists, their features obscured by cloth hoods (or real feathers), standing as if for inspection. The source images are perhaps bureaucratic or medical. Woods places them in mysterious indoor/outdoor, real/simulated surroundings reminiscent of Joseph Cornell’s assemblage boxes or Giorgio de Chirico’s vertiginous plazas.

As we all know by now, the Surrealists were social and aesthetic rebels, but less than enlightened by current standards of gender equality. Woods differs from the intellectual bad boys of 1920s Paris in rejecting the Surrealist idea of the female muse, instead embracing motherhood and womanhood as themes, while adhering to the collage technique for altering reality. Woods’ images in Vestiges dethrone the male gaze and scuttle the objectification of women. Photographed body parts of the artist and others merge with geometric structures to form sculptural presences—faceless surrealist personnages—set against white backgrounds. Weirdly humorous, they’re subversively feminist, but in no doctrinaire way: ribbons wrapped around bombs, as the Surrealist leader André Breton described the paintings of Frida Kählo. Some appear monumental, and could easily become public sculpture. 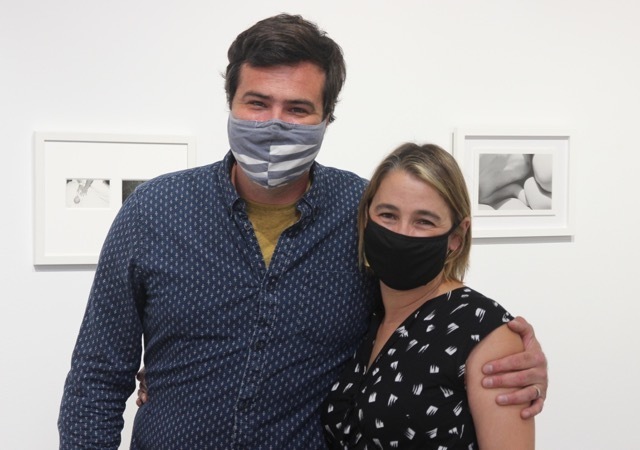