WOMEN我們: From Her to Here

Last year’s Black Lives Matter and MeToo movements shook America to the core, focusing long-overdue attention on ancient injustices institutionalized by law and custom. The prejudice of ’real’ Americans—white, straight, and male-dominated— toward the racial and gender (or sexual) Other has been aptly characterized by the historian Henry Louis Gates, Jr., as “the white normative gaze.” That gaze is increasingly backward-directed, as post-election and post-insurrection attempts to forestall the future include serious measures like voter-suppression legislation and hate-crime attacks on Asians, and trivial distractions like the culture-war hysteria over ‘classic’ children’s books and toys.

In this fraught context, WOMEN我們: From Her to Here, at San Francisco’s Chinese Culture Center (February 19-August 28, 2021) offers an alternative vision that is global and inclusive—and forward-looking. The Mandarin term for ‘we’ is ‘wǒmen,‘ and the playfully-titled From Her to Here, is the third of a series exploring women’s and women artists’ roles in the Asian diaspora. By employing archival imagery and digital technology, it melds respect for the past (e.g., ancestress pioneers) with hope for a future of gender respect, solidarity and tolerance.  CCC Curator Hoi Leung: “I want to present feelings and experiences rooted in the nonbinary, where individuals  are given the freedom to define who they are, what their safe spaces are like, and what their communities can be.” CCC Executive Director Jenny Leung: “WOMEN我們 is a bold voice for equality and social justice.”

Eleven LGBQT+ and feminist artists and art collectives or teams from the San Francisco Bay Area, Taiwan, Hong Kong and Beijing were invited to participate. Their works range from prints and photography to video, film and installation. 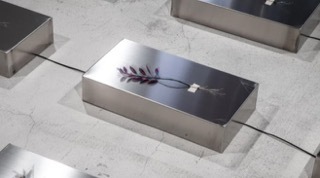 The three artists from Taiwan are Chen Han Sheng, Huang Meng Wen, and Yao Hong.  Chen’s mixed-media installation, When I Was A Child, employs floral and botanical imagery in a screenprint and a sculptural array of stainless steel boxes, each bearing a single leaf that moves, intermittently, to commemorate the murder in 2000 of a Taiwanese teen, Yeh Young-chih, who was deemed effeminate by bullying classmates for making artificial flowers; his death in the school bathroom eventually led to reformist legislation. Huang’s Suits and Corsages series pays homage, via a video of black-and-white vintage snapshots, to the sartorially splendid cross-dressing “Teddy Girls” of 1950s Taiwan who defied conformist fashion expectations financially, too, running a corsage business; her color group portraits, with their youthful subjects posing casually while attired formally in tailored black business suits and floral cheongsams, exalt their cultural descendants today; and vintage studio portraits framed by defocused period backgrounds add an elegiac note. Yao’s Erotic Wallpaper, framed by digitally printed tiles, covers the gallery foyer walls with dazzling color and pattern, and snippets of imagery and text; the artist’s free-form, non-associational “neurotic visual texture that defies common sense” may express the anxiety of contemporary Taiwanese life in our uncertain era, but the more-is-more effect is as weirdly exhilarating as it is claustrophobic. 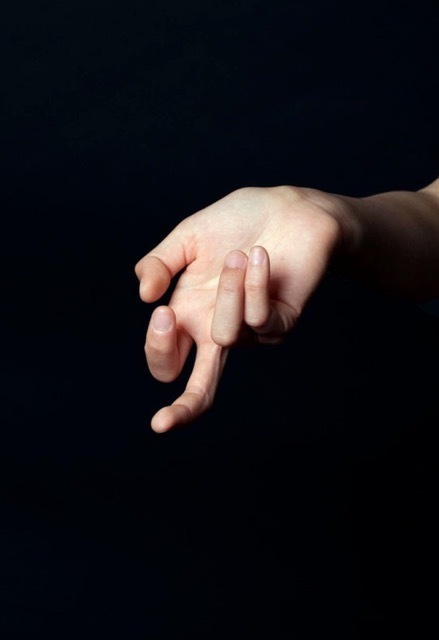 The photographer Nicole Pun and the gay archivists/activists of the Queer Reads LIbrary and Mixed Rice Zine are based in Hong Kong. Pun in her In & Out series photographed against black backgrounds the caressing gestures of lesbian lovemaking. The Queer Reads Library, a collaboration of three artists, writer Rachel Lau, editor Kaitlin Chan, and publisher Beatrix Pang, is a collection of LGBTQ books created for young readers created in response to censorship by HK libraries. J. Wu, the Bay Area-based creator of  Mixed Rice Zine, named after a term for Asians who prefer white sex partners, curated. Besides the publications, the display features an interactive aspect, the Queer Reads Lexicon Project, which employs QR coding (note QR coded meaning) to collect gay slang in various languages.

Moving west, we have the team of filmmakers Luka Yuanyang Yang (Beijing) and Carlo Nasisse (New York), and the spoken-word performer Brad Walrond (New York).  Yang and Nasisse collaborated in the affecting 2019 film Coby and Stephen Are in Love, about a former nightclub dancer from San Francisco Chinatown’s Grant Avenue Follies and her experimental-filmmaker partner and soulmate. In his video, Blood Brothers, Walrond declaims passionately and poetically about the onset of the AIDs crisis, his words in English and Mandarin accompanied by images from artist Steven A. Williams; if we could once have comfortably relegated that tragedy to history, it resonates particularly powerfully with us now, struggling through the covid and opioid crises. 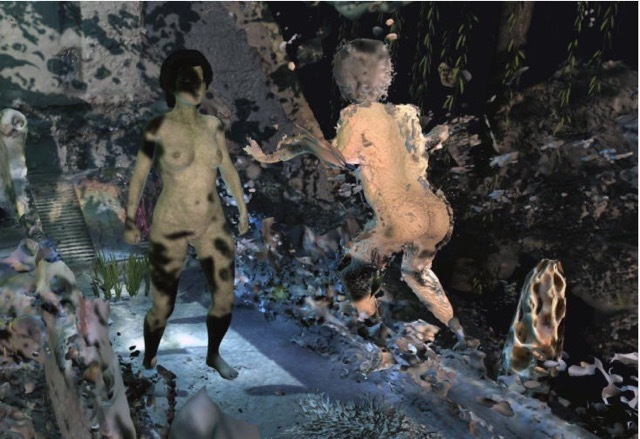 Rounding the terrestrial corner, we come to the Bay Area, home base to filmmakers Heesoo Kwon, Madeleine Lim, and Tina Takemoto, and painter Chelsea Ryoko Wong.  Kwon’s digitally created videos employs Second Life software to generate 3D animated figures, nude stand-ins for her female relatives, who inhabit a tropical paradise atop an island floating through deep space, or enveloping a 3D flyover representation of the Chinese Culture Center’s distinctively inverted-Y-shaped building (on the third floor of the Holiday Inn). In Kwon’s invented religion, Ley Museoom Town is a multi-generational peaceable kingdom of sisters and daughters partially clad in snakeskin, a borrowing from Korean folk culture; utopianism is always iffy, but the current dystopic myopia calls for hope. Lim’s acclaimed 1997 video, Sambai Belacan, named after a Malaysian shrimp dish, portrays the daily struggles of three Singaporean lesbian immigrants; employing a variety of styles, the film captures the complexity and contradictions of new Americans negotiating life suspended between the old and the new, between reality and dreams.  Takemoto’s film, Ever Wanting (for Margaret Chung), takes as its subject Margaret Chung (1889-1959), a pioneering Chinese woman physician who lived an adventurous secret love life; the film is evocative rather than expository, so that you might not discern its subject matter from its oblique, allusive shots of medical paraphernalia, Lily Pons, Anna May Wong, WAVEs and WW2 Flying Tiger fighters, all speckled with orange and brown flak suggestive of combustible nitrate film stock. Last but not least, Wong paints cheerful scenes of a gay alternate universe in bright tones and flattened shapes reminiscent of Romare Bearden’s collages or Joan Brown’s paintings. A Secret Place: Li Po Lounge depicts the Chinatown hangout for 1940s gays, still in operation, as a fit milieu for the legendary poet who drowned while trying to embrace the moon.  The Forbidden City illustrates not the imperial center of Beijing, but the 100%-Asian Union Square nightclub of the 1940s and 50s that inspired the novel and movie Flower Drum Song. No chastely alluring fan or bubble dancers inhabit this cheerfully feminist painting; it’s a place where the drop-dead gorgeous sisterhood might warble with delight Rodgers and Hammerstein’s “I enjoy being a girl.”

The exhibition was online only (https://www.cccsf.us/women-from-her-to-here ) due to pandemic regulations, but is now open for scheduled visits via the website.