SLAC National Accelerator Laboratory is proud to announce an exhibit of works by the couple of Julie Huang and James Su, who were trained in art in mainland China and now work at their Twin Peaks Studio in San Francisco (www.art-su.com, wjsart@live.com). In a joint artist statement, Huang and Su write:

... our paintings reference something real found in nature. The paintings are not direct references to what we see, but subtle....  such as the air surrounding a mountain or water passing through a volcano.....  Abstraction reflects the feelings in the heart that are all mixed together in the interior.  We feel that our ideas flow through when we paint abstractly.... Our paintings demonstrate a variety of natural expressions of life ...  marine animals, microorganisms, flesh, cells, and organs.  We do not pursue the likeness of any particular creature; instead, our aim is to evoke the spiritual, sensory, and overall mystique of life.  Our Earth is so unique: its ... intricate and complex system ... supports all of life. Plants, animals, microorganisms ... are [an] interdependent organic system.... Humans are but a link in this chain; we must live together and as part of nature in order to survive. ... As an ancient Chinese saying goes, "Wisdom loves water, benevolence loves mountains".... From the Chinese tradition, we embody the concepts of "Ch'i" and "Yun", energy and harmony. The flow of "Ch'i" is captured in the white, formless spaces of the paintings. The balance and rhythm of "Ch'i" leads to "Yun", or harmony.

After Julie Huang graduated from Shanghai’s Tongji University, she worked as a teaching assistant in the university’s Architecture Department, earning a master’s degree in 1986, before earning another master’s degree in 1989 from Washington State University. In the 1990s, she worked as a designer and marketing manager before founding her own engineering company, designing buildings, bridges, and public facilities. Now a professional painter and art professor, she creates poetic and compelling abstract paintings that mix color, form and texture in fresh and surprising ways that look at the same time inevitable. Connected, the work for which her show takes its name, depicts a ring-shaped form that hovers ambiguously between tangible object and dematerialized energy; it is set against a background that suggest both patterns found in nature and calligraphy. That same meshing of culture and nature is the subject of Inscription, with its mountainside manuscript, and Mountain Clouds, with the mountains from collaged classical paintings set amid the water that Huang loosely improvises.James Su studied painting and illustration at the Shanghai Art Institute and worked as a freelance illustrator for a publishing company, with his work featured in many books and magazines.  In 1985, he emigrated to the United States, where he obtained a PhD degree in engineering. Su’s interest in traditional painting, abstract expressionism (which, it is now acknowledged, shares many features with Chinese painting) and digital technology come together in a recent project: a computer program that creates stunning paintings and animations. A full-time artist, Su is equally adept at traditional landscape painting, figurative work, and abstract paintings that mix Eastern and Western sensibilities. An art professor at three universities, Su has shown widely in the US and China. The two large oils on canvas in this show depict the theme of aristocratic ladies enjoying springtime country outings, a theme explored by the 8th century Tang Dynasty court painter Xuan Zhang, who in Lady Guo Guo's Spring Outing in the Beijing Palace Museum) depicted the favorite concubine of the emperor Xuanzong and her retinue, mounted on horseback, dazzling the peasantry with their luxurious splendor. Su’s versions update this theme to the mechanized, global-economy, present day, with lighthearted irony

SLAC’s Building 52 is not open to the public except during receptions by reservation. For more information, please contact Curator DeWitt Cheng at 415-412-8499 and acdcmr@earthlink.net.  Artopticon.us is the successor program to Stanford Art Spaces. 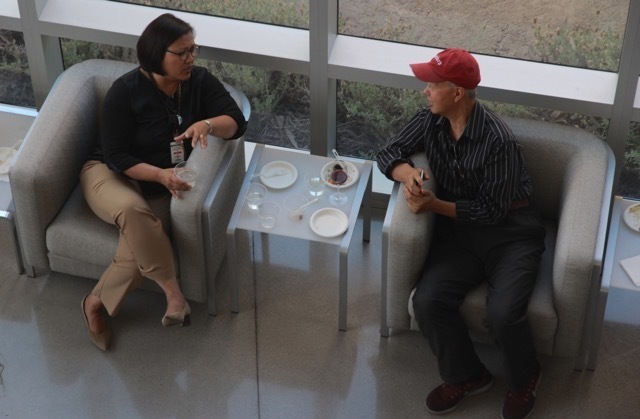