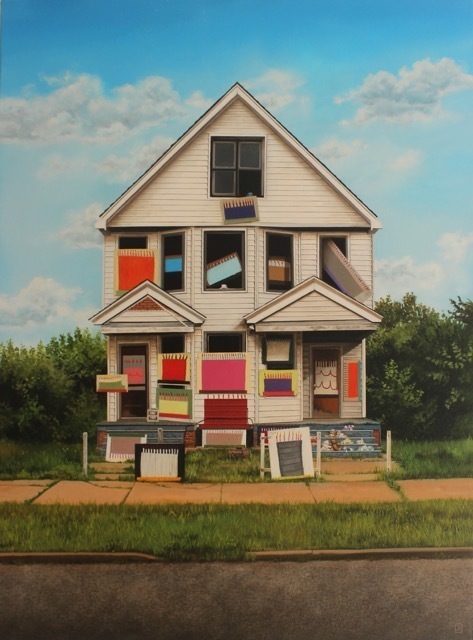 JESSICA HESS: Less is More
Hashimoto ContemporaryThe San Francisco painter Jessica Hess, who mixes a realist vision, photorealist technique and a bent for conceptualism and even social comment, is back, with fifteen new hyperrealist works depicting slices of architectural life of urban America, from New England to Alameda, and from Portland to Detroit.  Her decidedly unglamorous views of dilapidated or graffiti-enhanced buildings attain a kind of poeticization of the everyday and banal —what most of us walk right past and overlook—but without politics or pathos: most exude a kind of wry humor, delight in the idiosyncratic, an attitude that one associates more with Pop art than with visually punctilious photorealism, which tends to glorify and memorialize its subjects. Hess’s use of photographs is actually closer to David Hockney’s multiple-perspective Polaroids than to the measured classicism of, say, Robert Bechtle’s views of suburban California.Hess shoots up to a hundred photos of each site and constructs from the 4x6 prints a collage, altering color and even weather and time of day to suit the direction that evolves during the painting process. If her previous show, More is More, in 2015, focused on capturing the abstractions that graffiti glut could create on abandoned buildings’ walls, Less is More (with its implicit reference to the functional Bauhaus architecture, sans ornament, of Mies van der Rohe) examines the mostly unadorned structure—except for the “buff” painting made by building managers covering up graffiti with irregular rectangles of tan and gray paint, suggesting Hans Hofmann canvases with the saturation levels nearly zeroed out. Hess: “I love weathered surfaces, faded colors, decay. The older I get, the more I appreciate subtlety.”—DeWitt Cheng 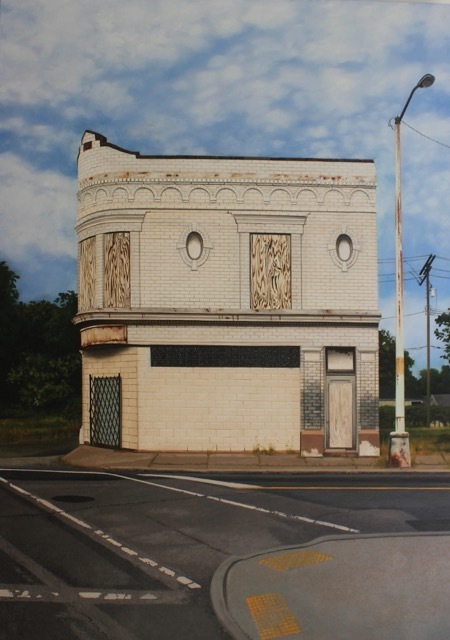 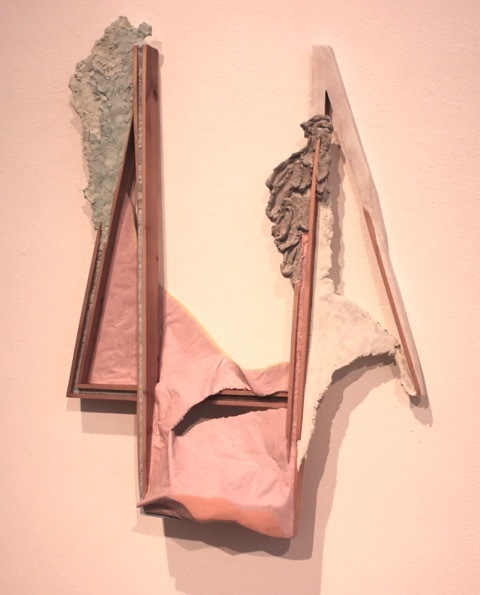 CHRISTIAN MAYCHACK: ReciprocalsGregory Lind GalleryBy DeWitt ChengIn Kafka’s “The Cares of a Family Man,” we meet a small, strange creature lurking on the narrator’s stairway and in his foyer. No animal, but a spool affixed to wooden crosspieces, trailing bits of thread, it’s a “broken-down remnant” composed of scraps, an animated bricolage. When asked its name, it stops rolling, and replies, in a voice “like the rustling of fallen leaves,” Odradek.Some of Kafka’s absurdist humor—gentler in this story than elsewhere—informs Christian Maychack’s mixed-media artworks. The artist combines painting, sculpture and installation into bricolages that seem almost animate, and playfully subversive. Maychack studied art in the San Francisco Bay Area, and absorbed its traditions of assemblage, trompe-l’oeil illusionism, and personal mythology; but also the post-minimalist interest in imbuing emotion and presence into abstract structures; he cites the personal, idiosyncratic work of Jessica Stockholder and Martin Puryear as major influences. While working as an art installer and preparator, Maychack began using the skills and materials from that job to go beyond traditional painting and printmaking. One might describe his weirdly humorous works as a quest to “re-enchant” art (to use the term employed in 1991 by the then-disenchanted art critic Suzi Gablik), although the work achieves its effects abstractly, through the interplay of wood, steel, and pigmented epoxy clay.“Reciprocals,” Maychack’s fourth show at Gregory Lind, comprises eleven assemblages, all from 2017: nine wall-hanging reliefs, with two small sculptures mounted on pedestals. They’re small- to medium-sized, but charged with energy and humor, reflecting the artist’s interest in interchange and interchangeability “between painting and sculpture, front and back, an object and its surroundings, etc.... I often use color to create moments of seeming flatness. Pastels and tinted whites interact with negative space, the pieces’ irregular shapes, along with shadows and the whiteness of the wall, to create a disoriented object.” That phrase may suggest Harold Rosenberg’s term, the ‘anxious object,’ used to describe the experimental works that came after Abstract Expressionism’s existential drama, but did not denote work deliberately provoking viewer anxiety. Rosenberg imagines the works pondering, “Am I a masterpiece, or an assemblage of junk?”Well, maybe both, such is the dichotomous magic of art. Eight of the works—untitled, but numbered—belong to Maychack’s Compound Flats series, begun in 2011, all employing pigmented epoxy clay pressed into the apertures of chair caning, like fossils in a clay matrix. Some viewers saw the clay-embedded caning as photographic, so the pieces had a provocative ambiguity. (Art history mavens will remember that one of Picasso’s 1912 Cubist still lives employed a printed textile of chair caning to similarly playfully discombobulating ends.) The new works forgo the chair caning but without loss of complexity. Compound Flat #62 is composed of a rectangle and triangle fashioned from wooden sticks suggestive of stretcher bars that have been combined or superimposed; ridges and fields of red, gray and whitish epoxy clay transform this patched scaffolding into deconstructed painting; Manolo Valdes’ heavily impastoed (and faceless) takes on Renaissance portraiture come to mind. Compound Flat 50, 52, 59, and 58 (subtitled Pink Dropout) are based on stacked double rectangles, suggesting open sash windows—or, again, stretcher bars—divested of their glass or canvas, with swaths of fabric (actually pigmented epoxy) inserted into the mechanisms, holding them in place, or together; the window idea is borrowed, of course, from traditional painting. Perpetual Climber and Compound Flat 60 deviate further from rectangularity into idiosyncratic shapes that perfectly balance the centrifugal, expansive  accidents of the creative process with the centripetal, contractile shaping of the organizing aesthetic sensibility. 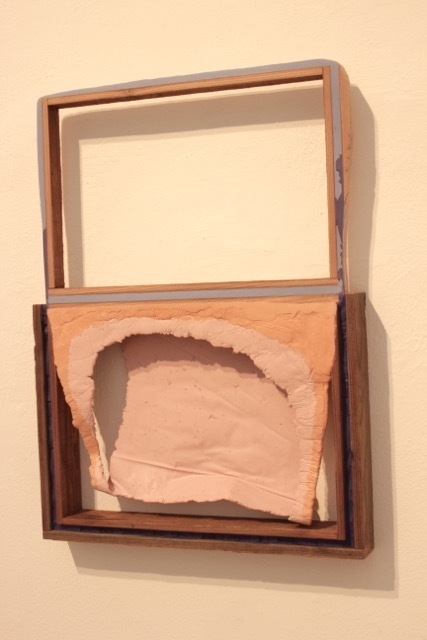 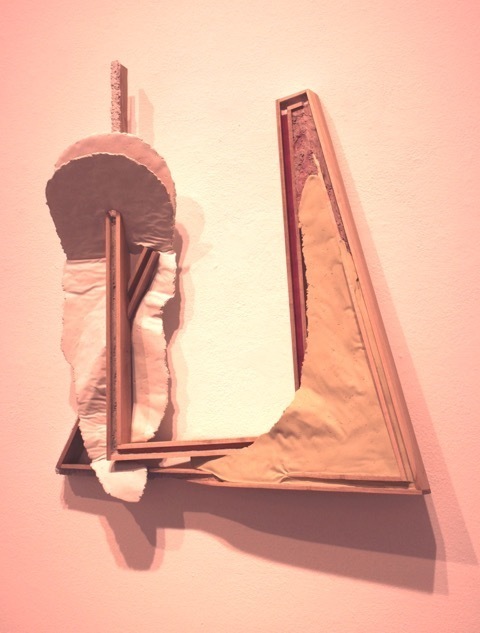 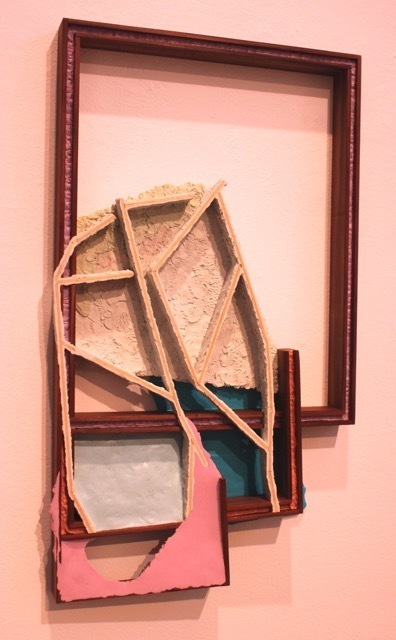 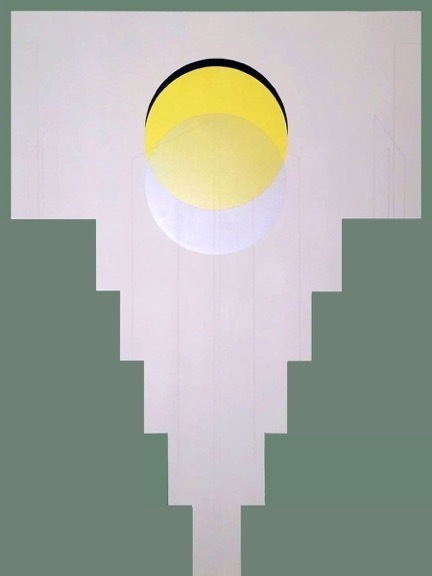 Claire Colette Re-Enchants Geometric Abstraction at Johansson Projects
(reprinted from East Bay Monthly, September 2017)
Geometric abstraction is usually considered to have originated in the United States in the 1960s, with innovative painters like Frank Stella, Kenneth Noland, Lawrence Poons, Ellsworth Kelly and others, whose ostensibly took the modernist painting to its logical conclusions. Perhaps the art-critic and prophet of that era’s formalist analysis, Clement Greenberg, was unaware of it, but geometric abstraction actually originated a half century before, in Europe—with Kasimir Malevich’s revolutionary Suprematism, and it was anything but an exercise in formalist pure visual aesthetics. Malevich was utopian without reservations or embarrassment, a Christian mystic from the Ukraine who found in the black square (a motif which adorns his grave) an icon for a new age; Mondrian, similarly, now known for his primary-colored stripes, was deeply influenced by Theosophy, the alternative religion of disaffected fin-de-siècle intellectuals.

Claire Colette’s abstractions in Monument Eternal continue this lineage of spiritual abstraction. The show’s title is borrowed from Franya Berkman’s creative and spiritual biography of Alice Coltrane (the wife of John Coltrane in the 1960s), a brilliant musician and composer who fused gospel, rhythm and blues, jazz, bebop, Hindu devotional hymns and European classical music, and, as Swamini Turiya Sangitananda, performed with other musicians pursuing “spiritual aesthetics.” Colette’s paintings depict the sacred architecture and the creation myths of various cultures, along with the astronomical phenomena studied throughout human history, but they’re filtered though a minimalist, modernist sensibility. Without titles like The End is the Beginning, or The First Hour of the World, or Adityas, referring to the offspring of Aditi, mother of the Hindu gods, one might not discern the spiritual dimension, still problematic for those raised on the outworn creed of dogmatic materialism yet capable of suspending considerable disbelief in art, fashion and politics. Monument Eternal runs through October 28. Reception Saturday, September 9, 3-5pm. Johansson Projects, 2300 Broadway at 23rd Street, Oakland; open Thursday through Saturday 1-5 and by appointment, (510) 444-9140; johanssonprojects.com. —DeWitt Cheng

STATE OF THE ARTS 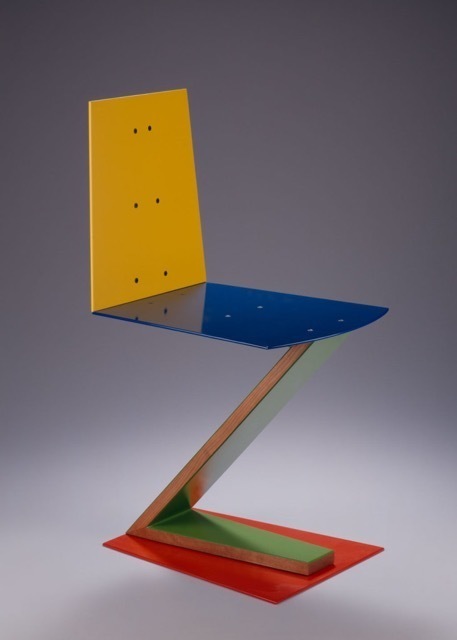 Garry Knox Bennett at Transmission Gallery, 770 West Grand Avenue, Oakland, www.thetransmissiongallery.com. Oakland’s master of witty and immaculately fabricated art furniture (including hippie-era Art Nouveau-ish roach clips) returns to the East Bay gallery scene, twelve years after his 2005 Oakland Museum show at the large lobby at 555 12th Street. Details on the show are sketchy at the moment, and might includes lights and lamps, but however things evolve, the show, which might include chairs, desks, clocks and tables, will be amazing, delightful, and a testament to old-school craftsmanship, freewheeling imagination and irrepressible humor. Bennett: “Some people call me an artist. It’s flattering, but I’m not. I have friends that are artists, but I’m a damn good furniture maker.” Reception Friday, December 1, 6-9pm. December 1 - January 20. 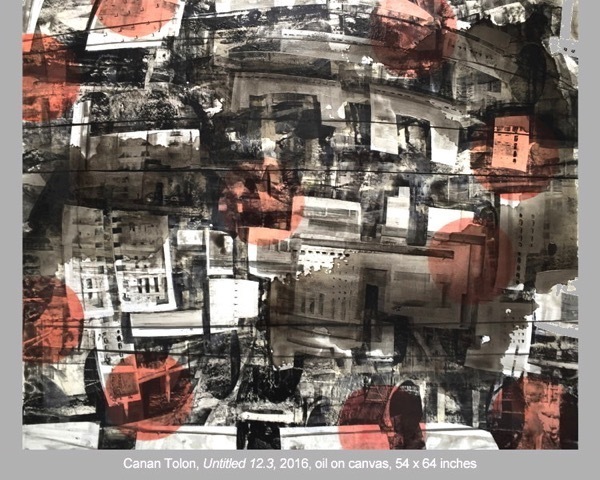 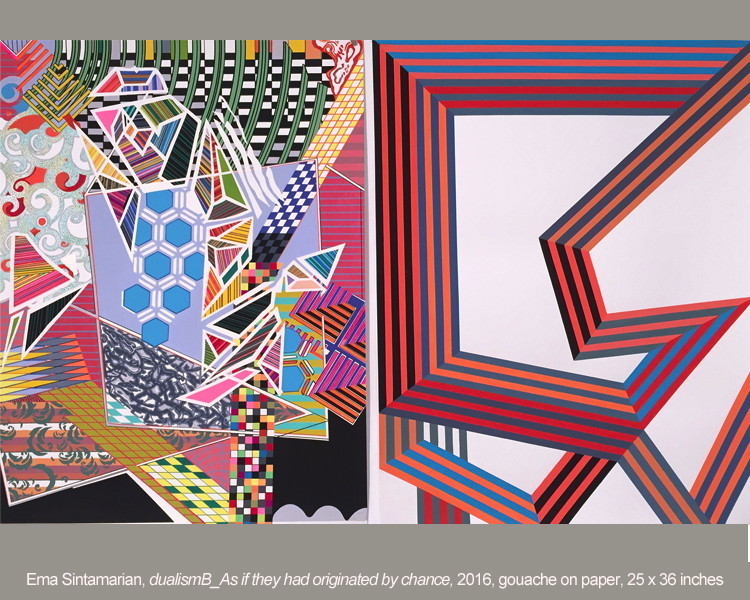 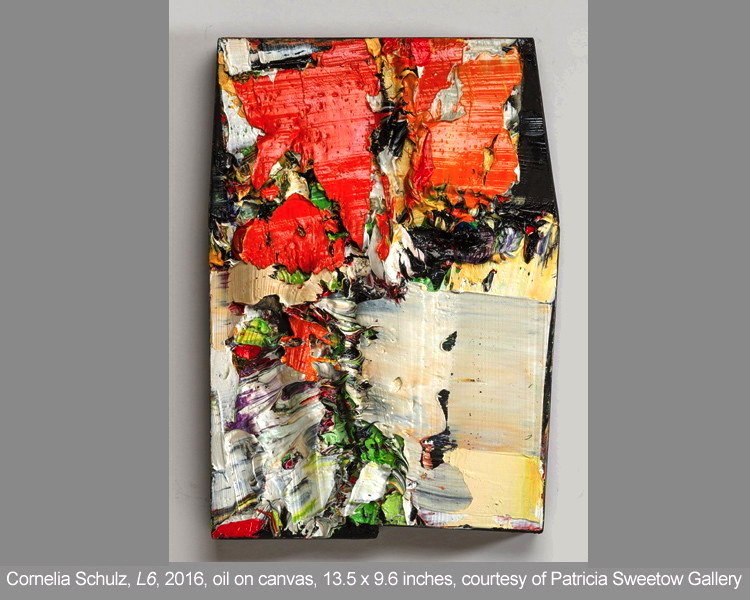 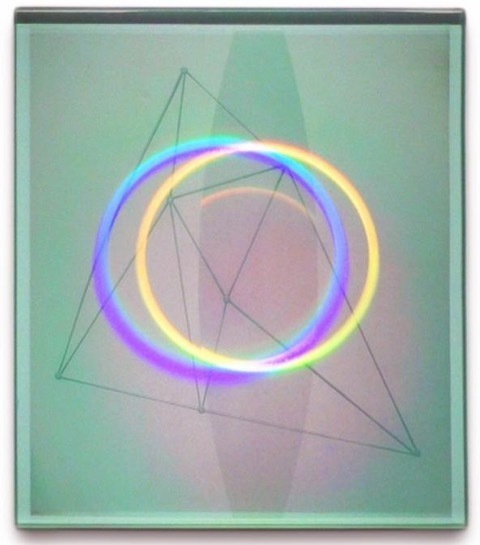 August Muth: Tactile Radiance at Chandra Cerrito Contemporary, 480 23rd Street, Oakland, www.chandracerritocontemporary.com. Muth is a Santa-Fe-based artist who has been working with holograms, those three-dimensional projections (now familiar from Star Wars and other movies) for thirty years. He creates his own works (with a proprietary emulsion) as well as assisting other artists; the James Turrell holograms shown recently at Pace Gallery in Palo Alto are collaborations, I presume. Muth’s holograms convey not desperate appeals to Jedi knights, but geometric forms floating in color fields, hovering almost tangibly in the viewer’s space. Muth considers light to be a tactile medium, and these holograms are not illusions, but “photonic truth.... Through my work, I strive to record with precision the perceptible light-space-time phenomena.  As these three elements intertwine, a three-dimensional topography of pure light is formed, revealing a window into the elusive realms of the light-space-time paradox.  Luminous veils of light invite the viewer into a multi-dimensional journey.... Light is the faithful archivist of time.” First Friday reception, September 1, 6-8pm. August 4 - September 28. 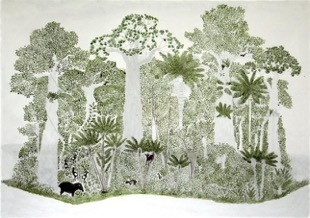 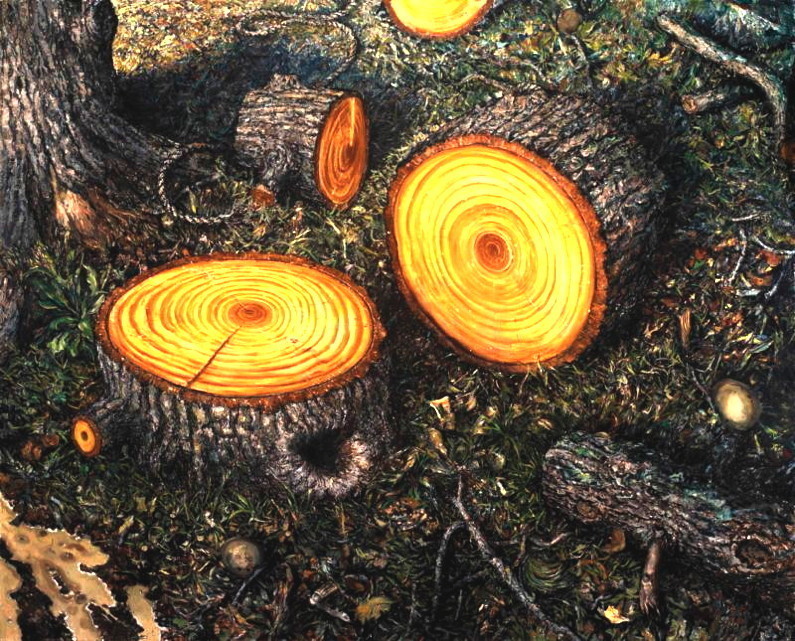 Earth, Wind and Fire at Richmond Art Center, 2540 Barrett Avenue, Richmond, www.richmondartcenter.org. Remember when postmodernist art theory declared nature dead a decade ago, and long live culture? It’s not worked out exactly as we in the fact-based universe would have hoped, but maybe the sullen kid at the G-20 meeting in Hamburg will take a hike.  This show, Earth, Wind, and Fire, explored the reality of our place in the natural world through the artifice of — art, made by the social landscape (for lack of a better term) painter Chester Arnold, the conceptual artist Paul Kos, the figurative glass sculptor Clifford Rainey, and the painter Abel Rodriguez, a member of Colombia’s Nonuya people, now in exile, who shares his intimate knowledge of the Amazon ecosystem entirely from memory: "I had never drawn before, I barely knew how to write, but I had a whole world in my mind asking me to picture the plants.” Reception Saturday, September 9, 5-7pm (probably). September 12 - November 18. —DeWitt Cheng 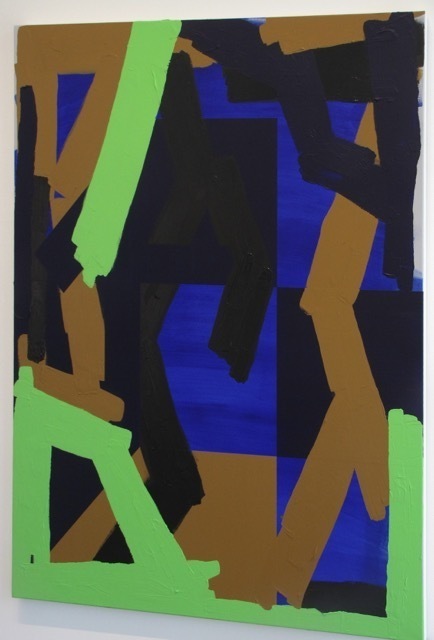 Chad Hasegawa
Andrea Schwartz Gallery, San Francisco, California
Recommendation by DeWitt Cheng
Continuing through August 31, 2017
The San Francisco satirist Ambrose Bierce defined painting as “the art of protecting flat surface from the weather and exposing them to the critic.” San Franciscan Chad Hasegawa, known for his mural work, has created a body of abstract paintings on canvas that focuses on the issues of working outside (although, curiously, there is no mention of exposure to sidewalk critics): i.e., dealing with “wind, dust, and all angles of direct sunlight of all hours of the day.” Hasegawa aims for long-term survival “as if [the works] were outside in heavy conditions” — as well as for the immediate visual impact necessary for the street.
These large latex (“bucket paint”) and acrylic works, with their geometric shapes, eccentric and sometimes complex, suggesting three dimensions; their taped edges; and their textured paint, are monumental, in accordance with the artist’s admiration for the abstract expressionists Franz Kline, Phillip Guston, Joan Mitchell and Robert Motherwell; yet they’re also personal, befitting their inspiration in the traditional quilts of the artist’s native Hawaii, where these handmade objects are regarded as serious artifacts (as some of us continue to regard paintings). Hasegawa’s palette derives from the “royalty colors” of Hawaiian kings and queens, as do his high-contrast graphic compositions, which derive not from the natural world, as do traditional quilts, but today’s cultural world, and personal associations. Four small paintings, “Kahuku,” “Waianae,” “Haleiwa” and “Kapo Lei,” aligned vertically, constitute a symbolic map of four districts of Honolulu. The large works from the "Lean On & Against" series exemplify Hasegawa’s aesthetic of harmony through contrast, of painterly intuition layered into dynamic equipoise. 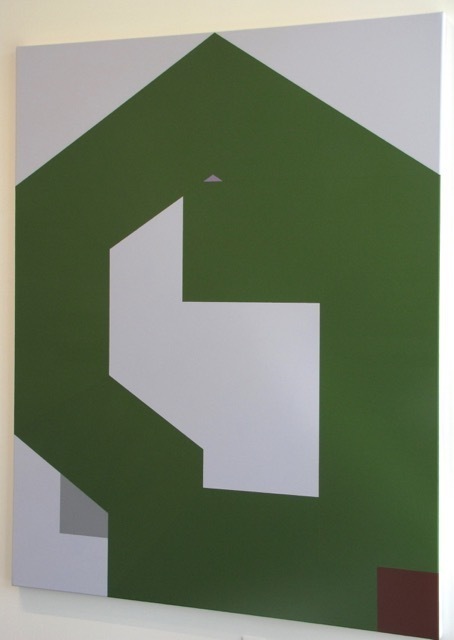